Kagwe puts hospitals on the spot over PPE distribution

• On Saturday, the Kenya Medical Practitioners and Dentists Board called for prioritising of PPE distribution. 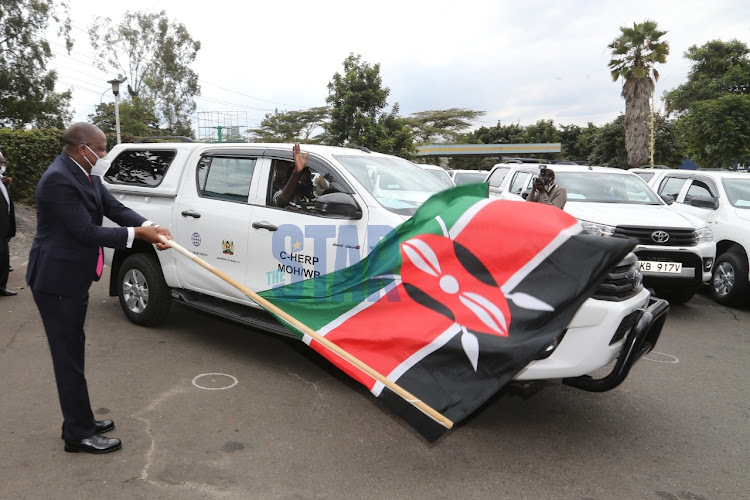 Kenya has more PPEs than it needs and it is up to hospitals to ensure they are distributed effectively, Health CS Mutahi Kagwe has said.

He made the statement during the daily briefing of Covid-19 status in the country.

This comes as medics continue to complain about access to Personal Protective Equipment (PPE).

On Saturday, the Kenya Medical Practitioners and Dentists Board called for prioritising of PPE distribution.

"To Kenyans, the disease is real. You have a responsibility to protect not just yourselves but we the health care workers. There is no amount of money that will compensate a family for the loss of their loved one. It is our civic duty to protect protect Kenyans, and these Kenyans are our relatives."

The union issued the statement after three medics - two nurses, and one gynecologist - succumbed to Covid-19.

KMPDU hits out at government for failing to take care of medics.
News
1 year ago

In May, Kagwe said Kenya will no longer import the PPEs citing that the local manufacturers are now able to produce better quality PPEs than those it had been importing before.

He stated that the local manufactures are producing capacity of 25, 000 per day and the shortage of PPEs will now be a thing of the past.

Meanwhile, Kagwe clarified on the cost of testing.

"We do not charge people in targeted mass testing. The charge for voluntary testing at public hospitals is Sh1,000."

He added that the ministry has urged private labs to reduce the price from Sh5,000 is too high.

"Sh 1,000 is the amount for those who feel the need to test and go to a government hospital," he said.

This is the highest number of daily fatalities recorded since onset of pandemic in the country.

Speaking during his daily briefings on Monday, Kagwe noted that the 12 are from Nairobi.

"Three died at home while the rest died in the hospital," he said.

Kagwe further announced 189 new cases of coronavirus in the last 24 hours, totaling the number of positive cases in the country to 10,294.

'Wait for it': We can't imprison Kenyans over virus denial - Kagwe

"Who are those other people who say they do not know about it?" he posed.
News
1 year ago