Two camps clash in the senate over the proposed method; losers vow to reject

• The meeting ended in disarray after the lawmakers whose counties were set to lose up to Sh17 billion stood their ground and vowed to reject it.

• They got the support of at least five other senators, mainly from ODM controlled areas, who argued that the formula was ‘about to split the country into two.’ 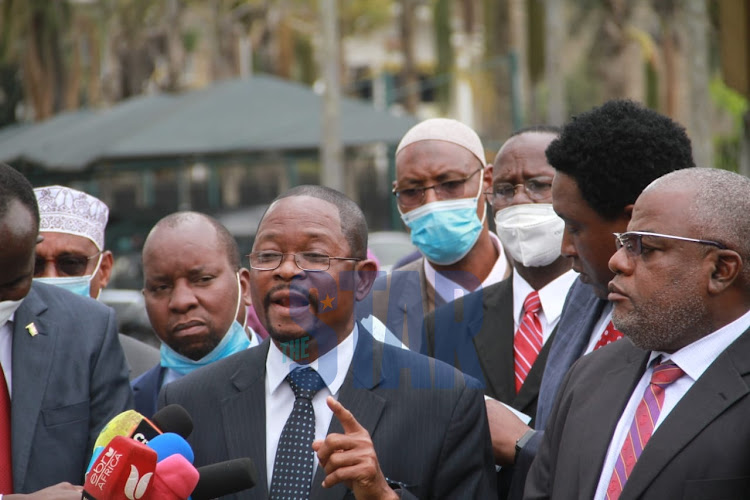 Senators, led by Kilifi's Stewart Madzayo, at Parliament Buildings on July 7. They said they will oppose the revenue sharing formula.
Image: EZEKIEL AMING'A

A stalemate that has stalled the passage of a new formula for funding the 47 counties persisted Monday after senators failed to find common ground.

The senators were forced to defer, for the second time, debate and subsequent approval of the contentious formula that has divided the house down the middle.

The third-generation formula will determine how the counties share Sh316.5 billion allocated to them in the 2020-21 budget.

The lawmakers failed to strike a balance even after a day-long kamukunji convened by Speaker Kenneth Lusaka to build a consensus on a method proposed by House Finance and Budget Committee.

The meeting ended in disarray after the lawmakers whose counties were set to lose up to Sh17 billion stood their ground and promised to reject it.

They got the support of at least five other senators, mainly from ODM controlled areas, who argued that the formula was “about to split the country into two”.

“This formula was not going to pass and if it did, then this country was going to be divided into two and there would be no referendum,” Narok Senator Ledama Ole Kina said.

On the other hand, senators from areas which would benefit accused their counterparts of “punishing them for being populous”.

“We cannot be punished for having more people. Do they want us to remove wombs from our women so that they don’t give birth? We cannot allocate money to land and forests,” Nandi Senator Samson Cherarkey said.

With the toxic environment and signs of ugly exchanges between the two camps, Minority leader James Orengo (Siaya) invoked Standing Order 32 and invited the Deputy Speaker Margaret Kamar, who chaired the session, to adjourn debate on the motion.

“If look at the order paper, there are various amendments to the motion that had already been given a notice of. We need to look at all these three simulations and also build consensus,” Orengo said.

House Finance and Budget Committee chair Charles Kibiru (Kirinyaga) had tabled the panel’s report and gave a notice of motion to approve it during the Special Sitting.

“I want to inform the House, what has been requested is an adjournment to allow further processing of the formula, which will not now involve the committee that has handled this,” Kamar said.

“The consequences of this is, that we are going to entrench marginalisation that has affected this country for decades, if not more than a century, those consequences will live to the next century or more,” he said.

The ex-deputy speaker said, “These things may look simple and somebody may be celebrating that his or her county is getting a few hundreds of millions at the expense of another county.”

Bungoma Senator Moses Wetangula called for a retreat of the House, the Commission on Revenue Allocation and other experts to agree on a formula.

In the proposal, the parameters of basic shareable revenue and population have each been allocated 20 per cent and 18 per cent respectively, health (17 per cent), poverty (14 per cent), agriculture (10 per cent), access to roads (6 per cent), landmass (8 per cent) and revenue effort (collections) and fiscal prudence one per cent.

The Kibiru-led committee had set July 2021 as the commencement date of the formula.

Among the biggest losers is Wajir whose allocation will be cut by Sh1.9 billion if the formulae is implemented.