Night meetings with religious leaders and politicians trigger speculations on their ambitions.

• Plans afoot to install Matiang'i as a Maasai elder.

• Matiang'i and Kagwe are said to have cemented their friendship in the recent days. 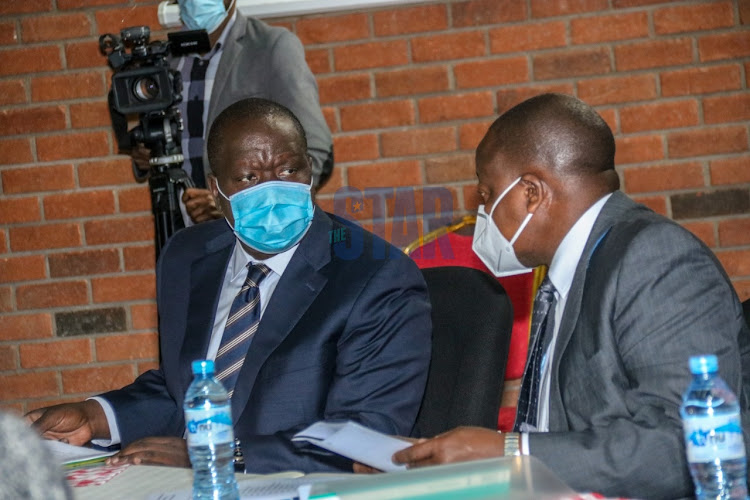 Cabinet Secretaries Fred Matiang’i and Mutahi Kagwe have struck a rare camaraderie in government amid speculation they could play a big role in President Uhuru Kenyatta's succession.

At every national briefing by Uhuru, Interior CS Matiang'i and Health's Kagwe are always by the President's side. The two lead dockets responsible for controlling the Covid-19 pandemic and have unfettered access to the President.

The Star has learnt that they have also been holding strategic meetings with opinion leaders and the clergy to build influence outside government as the succession battle takes shape.

Sources said there are forces within the system pushing for a Matiang'i-Kagwe ticket in 2022 as a break from the familiar faces that have dominated national politics.

A few days ago, the two are said to have separately held meetings with Mombasa Governor Hassan Joho and some religious leaders.

Matiang'i and Kagwe will again be hosted by Joho in Mombasa this week during a tour to assess the preparedness of counties to fight Covid-19.

CS Matiang'i will hold talks with security chiefs and politicians from the region while Kagwe will tour health facilities.

“We shall be in Mombasa for the Covid-19 assessment tour and as we have done before, we do this in collaboration with our counterparts from the Ministry of Interior,” Mutua said.

The Star has also learnt that there are plans to instal Matiang'i as a Maasai elder, signalling his bid to seek broad-based support.

"We are waiting for the coronavirus to end then we shall set the date," Isaac Ole Tialolo, one of the elders planning the coronation told the Star on Monday.

Kajiado Governor Joseph Ole Lenku is said to be spearheading the coronation, which is always seen as political endorsement.

Matiang'i was last year crowned a Kisii elder as a blessing by the community to seek the country's top job.

Speaking when he presided over a funds drive in aid of Achego Girls School in Muhoroni, Kisumu county on February 1, Matiang'i seemed to suggest that he and Raila had big plans.

“Raila recently said I am his son. I will walk close to him as we navigate ways to help our people. I will go the direction he shows me,” said Matiang’i, who was hosted by MP Onyango K’Oyoo.

If there is someone who knows what baptism by fire is, it's the CS.
Opinion
1 year ago

Kagwe's handling of Covid-19 has earned him accolades locally and abroad. Some leaders in Central say that he could make a good running mate.

Should the two get Uhuru and Raila's backing, it could trigger a major political movement.  Already, the political heavyweights have lined-up themselves for the President's blessing.

Although Raila has been under pressure from his allies to contest the presidency in 2022, former vice President Kalonzo Musyoka (Wiper) Kanu boss Gideon Moi and former Trade minister Mukhisa Kituyi are hoping that both Raila and Uhuru will endorse of them.

Deputy President William Ruto, who has been elbowed out of the succession equation after falling out with Uhuru, is also scheming to inherit his boss' seat.

This has thrown the succession race wide open despite indications that Uhuru is keen on diligent leaders with a performance track record.

On Monday, former Cabinet Minister Franklin Bett admitted that the President might shock Kenyans with his 2022 plans given that the field is overcrowded.

Bett said the Matiang'i-Kagwe arrangement, if fronted, could upset the politicians seeking the President's blessings for 2022.

“The battle to succeed the President especially in his backyard is shaping up with Kagwe angling for the pie as well,” he said.

But the former Bureti MP said Kagwe faces a formidable challenge from Peter Kenneth, a seasoned and well respected politician.

Peter Kenneth has resurfaced, affirming his plan to back Uhuru's agenda.

Political analyst Felix Odhiambo said Matiang'i and Kagwe's place in the ultimate political settlement to be created by the Building Bridges Initiative cannot be gainsaid.

“This is where meritocracy outweighs even political considerations. The duo I believe will have bigger roles to play even as technocrats in the BBI government,” he said.

Kagwe is a former Nyeri Senator who honed his political skills during the Kibaki era but has shot into the limelight given his firm grasp of ideas and the management of the coronavirus.

Matiang'i is chair of the National Development Implementation and Communication Committee, a powerful Cabinet organ that oversees all state projects across the country.

He was appointed to the position in January 2019 by President Uhuru. Analysts said the move was meant to whittle down Ruto's influence in launching state projects.

Political analyst Mutahi Ngunyi, who is famed for his 'tyranny of numbers' phrase in the lead up to the 2013 polls, says Kagwe is at the heart of Uhuru's succession.

“He (Kagwe) is the kind of person you don’t want to play around with. When talking about the ultimate succession of Uhuru Kenyatta, I think Mutahi Kagwe places himself as a possible chief in waiting among the Kikuyu,” Mutahi Ngunyi said during a K24 interview in April.

He added: “He [Kagwe] has done a splendid job. He was created and nurtured in the Kibaki school of politics. If you hear him talk, he talks a bit like Kibaki.”

Matiang'i and Kagwe have built national profiles because of their domineering personalities and efficient execution of mandates.

“The two leaders have developed a working chemistry that has surprised their colleagues. They are in constant communication on a daily basis,” said a source familiar with their workings.

The source, however, says the two are working closely to ensure that the President's legacy projects are delivered.

“We have seen what Matiang'i has been able to do, there is no doubt about his capacity to deliver. We are pushing him as one of our own to the negotiating table for a share of the national cake,” Momanyi said.

“The most important thing is to have him positioned properly so that when succession politics begin in earnest, he would be right there for the negotiations,” he told the Star.

Part of Matiang'i and Kagwe's strategy to sell themselves to the public, is to hold joint visits to select counties to assess the level of preparedness against the coronavirus pandemic.

While on such tours, Matiang'i meets security and national administration officers and inspects projects while Kagwe takes charge of Covid-19 programmes.

They visited Nyandarua county on June 15 together where Kagwe inspected health facilities before updating the country on the day's Covid-19 situation.

Kagwe was taken round the heath facilities by Governor Francis Kimemia. At the same time, Matiang'i met with national administration officers across the county.

In Ruto's camp there is growing anxiety that the CS is being propped up by powerful people.
News
1 year ago

I am not 'waziri wa corona', CS Kagwe tells Kenyans

Since the first Covid-19 case was reported, Kagwe has featured in most briefings.
News
11 months ago
by JAMES MBAKA Senior Political Writer
News
30 June 2020 - 05:00