HE THOUGHT IT WAS FLU

Still in doubt? How Covid-19 killed man in 12 days

The death of Muriithi sounds a wake up call to Kenyans to take the virus seriously.

• Muriithi passed on two days after admission to ICU and was buried in 48 hours.

• His wife also tested positive for the highly infectious virus. 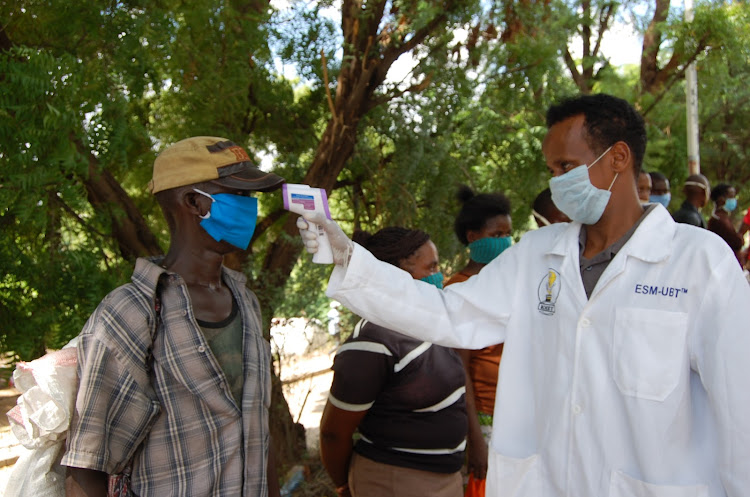 COVID-19: A health official screens a pedestrian at the Garissa Tana bridge before allowing him to enter Garissa town on, May 4, 2020
Image: STEPHEN ASTARIKO

Still not taken Covid-19 seriously? When Robert Muriithi met one of his mentees for lunch two weeks ago, he hoped for the usual discussion and that would be all.

The young mentee had a persistent cough but dismissed it as a slight flu, an irritation or allergy that would just go a way. Except it wasn’t that simple.

Three days later, Murrithi, 44, got unwell but self-medicated hoping the illness would just go a way. But his health got worse, eventually landing him in ICU. A Covid-19 test was positive, sounding all the alarm bells.

Muriithi passed on two days later and was buried in 48 hours. His wife also tested positive for the highly infectious virus.

His nine-year-old twin sons, however, tested negative. As per the state regulations the wife, though she attended the burial, was all alone, isolated from the rest and the gathering was as lean as possible.

The casket remained in the hearse as the funeral service went on, handled by 10 officials from the Ministry of health.

Just like that, as though a joke, a family man described as friendly, godly, diligent and prayerful died from to the virus, leaving behind a young family.

The death of Muriithi sounds a wake up call to Kenyans to take the virus seriously, especially in view of frequent media reports that members of the public are relaxed, not taking the government directives seriously.

Incidents of people wearing masks improperly on their necks or chins or ignoring them altogether, defying physical distancing guidelines, or ignoring requirements to sanitise have become commonplace.

Some matatus have resumed carrying passengers at full capacity in disregard of the directives to observe social distancing. Some people have played down the virus, claiming it was only for the rich because they had not seen someone in their neighbourhood infected or who died.

Muriithi's wife Betty eulogised her husband as a good man with a big heart who spent every bit of the time he had with his family. A resolute man who threw himself into things he believed in.

During his last days on earth, she said, they spent a lot of time speaking, not knowing her husband of 17 years was bidding her bye.

"I see now why we only see things in hindsight. We spoke a lot more times in the past few weeks than has been in a long time, deep life perspective, learning about true friendships, about life, children," she wrote.

"It breaks my heart that there was still so much more that we could have spoken about. He had noble plans about the future," she added.