• The campaign which will run for the remaining part of the year is in line with the World Health Organization’s (WHO) designation of 2020 as the year of the Nurse and Midwife. 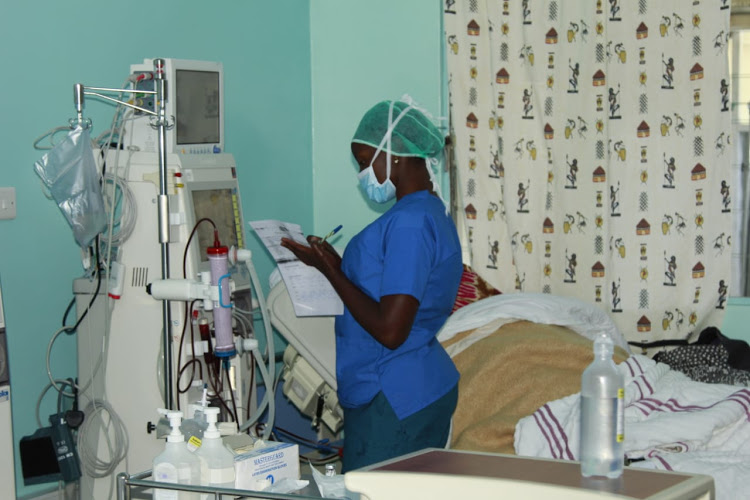 A nurse looks at facilities at the Kapsabet County Referral Hospital which has set aside an isolation ward for Covid-19 patients
Image: MATHEWS NDANYI

The National Nurses Association of Kenya (NNAK), on Monday launched a campaign to celebrate the International Year of the Nurse and Midwife in the Country.

The association will through the campaign embark on countrywide activities to recognize, honor and celebrate the nursing and midwifery profession in line with the role they play in the country’s healthcare system.

Association’s President Alfred Obengo said nurses and midwives cannot be ignored in the realization of the government’s Universal Health Care.

Obengo said the campaign which will run for the remaining part of the year is in line with the World Health Organization’s (WHO) designation of 2020 as the year of the Nurse and Midwife.

“The campaign aims at celebrating the pivotal role that nurses and midwives play in the health sector. The year 2020 also marks the 200th Anniversary of the birth of the founder of modern nursing, Florence Nightingale,” he said.

He added, “Nursing and midwifery forms an essential part of our healthcare systems. This year’s celebration places emphasis on the role we play in the delivery of quality healthcare, our areas of specialization, the strides we have made, and the need to develop joint frameworks to enhance our work”.

Obengo said nurses and midwives are a critical component of healthcare professionals as they are the first point of contact with patients.

So far two nurses have succumbed to the current COVID-19 since the first case was reported in the country in March.

As of June 10, some 72 nurses had been reported to have contracted the disease and hospitalized in various health facilities.

Health CAS Dr. Rashid Aman said by the nature of their work, the nurses  being front liners stand a higher risk of contracting the disease.

He said out of the 72 health workers who are infected, 19 of them are admitted in various health facilities across the country.

"I must however note that despite the infection, this has not undermined their commitment to duty," he said.

Out of the 72 infected, 28 had originated from Mombasa county.

Obengo said primarily observed as clinical care providers at the bedside, nurses and midwives have multifaceted and multi-sectoral roles in leadership.

“This is demonstrated at the policy level, academia, administration, entrepreneurship and advocacy at all levels,” he said.

According to him, besides working in hospitals, nurses and midwives play a critical role in policy and curriculum development in higher institutions of learning.

He said some work in industries and pharmaceutical companies.

“They have demonstrated their competence and capacity in combating the Coronavirus Disease (COVID-19) pandemic, a situation that has brought to the fore the sacrifices made by the country’s health professionals as they nurse the sick, and midwife expectant mothers,” the president said.

He said Kenya has also realized a higher proportion of births occurring in health facilities, a trend that points towards improved access to skilled delivery services and overall infant and maternal well-being.

Currently, the country has 58,247 registered nurses and midwives.

Among the activities lined up include webinars and direct engagements with various stakeholders including the public.

“All the activities are aimed at honoring the Kenyan nurse and midwife as well and empowering them in different ways,” he said.

91 per cent of virus cases are locally transmitted - Aman

Currently 41 out of the 47 counties have recorded Covid-19 cases.
News
1 year ago