Senators Christopher Langat (Bomet) and Mutula Kilonzo (Makueni) led other senators in calling for a relook of the current law with a view of improving it to allow for more interrogation of the documents. 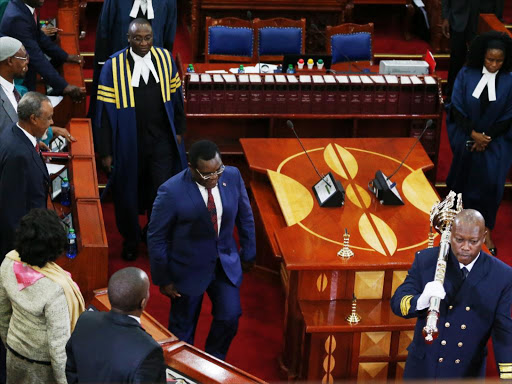 Senators have proposed a review of impeachment timelines, saying the current 10 days is limiting in terms of scrutinising evidence.

The lawmakers said more time is needed to go through some of the voluminous documents normally presented before the select committee.

Senators Christopher Langat (Bomet) and Mutula Kilonzo Jnr (Makueni) led other senators in calling for a re=look of the current law with a view of allowing for more time to interrogate the documents.

“We were observing it carefully, in future it will be very important to give them more time to peruse such voluminous documents,” Langat said.

“The committee was bombarded by documents. We must amend the timelines,” Kilonzo added.

The senators also called for action against their colleagues, who took to the social media to degrade the House as Waiguru's impeachment proceedings were underway.

Majority leader Samuel Poghisio noted that such toxic remarks are not helpful and only serve to embarrass the House.

“I understand that not everybody will like the verdict but justice has been served. We must have confidence on our committees,” Poghisio said.

“We must find a way from populist ideas which tries to degrade this House. Let’s try to restore the dignity of this House.”

But according to Elgeyo Marakwet Senator Kipchumba Murkomen – who is among leaders who have criticised the process in social media - nothing will restore the reputation and dignity of the House than the consistency of its decisions.

“To the people of Kirinyaga, take heart, you know what happened and I told you before,” Murkomen said.

Weighing in on the matter, Minority leader James Orengo (Siaya) said the 11-member team did justice to the case and called on those disgruntled by the outcome to respect the verdict.

“When institutions work, we should never be disappointed. I want to assure the people of Kirinyaga that what Senate has done is within the law,” Orengo said.

“For those who didn’t get John’s head, next time you should dance well for King Herod.”

Special Committee cleared her of all the charges, say they were not substantiated.
News
1 year ago
by LUKE AWICH Political Reporter
News
27 June 2020 - 13:45