•On arrival DP Ruto was doused with milk and honey from a special traditional gourd by elders dressed in wild animal skins. 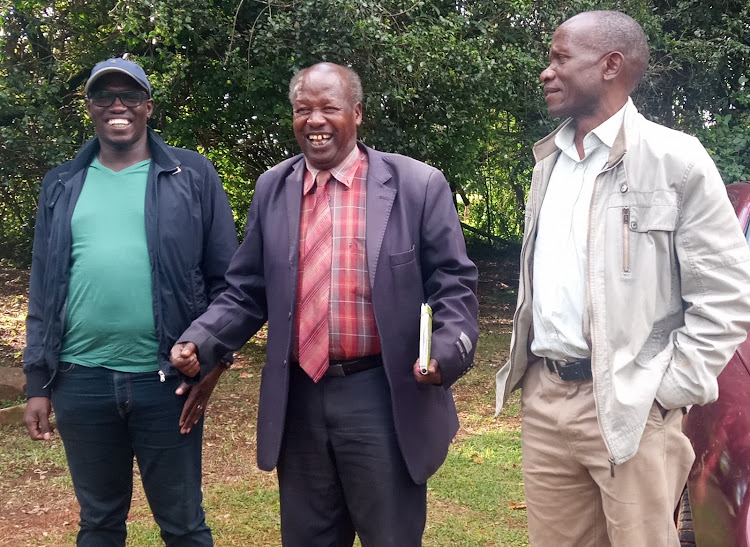 Nandi elders have denied exposing DP William Ruto to sacrifices, rituals or witchcraft in a bid to cleanse and protect him from harm and political miseries as he prepares to vie for the presidency in 2022.

But the elders, led by chairman of the Talai Council of Elders, retired reverend Canon James Baasi of the ACK church, say it was a ‘mere’ blessing ceremony for the DP and that no rituals were performed.

He said they are a highly religious unit that does not engage in ungodly acts.

The ceremony was at Baasi’s home. He told journalists that the ‘brief prayer and blessing ceremony’ was done at 8am and not at night as largely believed.

“I am a church leader as well as a clan elder. I was with five other church leaders along with less than 10 other elders and what we did was to bless the DP,  pray for him and even handed him some honey, a bible and hymn books,” Reverend Baasi said.

He said the Bible was symbolic that Ruto has to always rely on God while the hymn book was to provide him with songs to praise God.

“The honey symbolises sweetness. He should always speak out good words to unite all Kenyans,” Baasi said.

He said even in the Bible, Moses was handed over the leadership baton to lead the Israelites. “Leadership is derived from God and what we did was similar to what happened to the likes of Moses in the Bible,” he said.

Baasi said they now expect the DP to gun for the presidency.

He said the DP arrived at dawn for the ceremony because they wanted to comply with requirements of control of Covid-19 which prohibit gatherings.

“Normally this event would have been done at an open stadium. But we had to ensure we finish it quite early because had residents known of it they would have come to witness and hence cause crowding which is prohibited at the moment,” explained Baasi.

On arrival, Ruto was doused in milk and honey from a special traditional gourd by elders dressed in animal skins.

“We don’t practice any witchcraft or sorcery or anything close to that. What we did is fully godly and its wrong for anyone to try and taint what we did terming it as rituals,” elder Chrisopher Arap Agui said.

The elders, popularly known as Orkoik, and other present included Lawrence Nganai, and Stephen arap Tormoi.

During the event Ruto was then handed leadership instruments, including a baton (nogirwet) and a traditional stick (Siarit) said to have been used by legendary Nandi chief medicine-man Orgoiyot-Kipnyolei arap Turgat.

Reverend Baasi said Ruto had emerged as the ‘undisputed’ leader of the Kalenjin community following the death of retired President Moi.

“We did the same to Moi in 1962 at Kapkatet grounds and even President Kenyatta. The president, during an event at Nandi Hills, promised us and Kenyans that he would lead for 10 years and then Ruto would succeed him,” Agui said.

“What we did was also in line with that and we highly respect and support President Kenyatta.”

The Talai elders ceremony also involves dressing of a person with a lion skin and handing him a colobus monkey cap as he sits on a special stool, one which was last used to crown President Kenyatta after the Supreme Court ordered a repeat of the 2017 presidential election.

Freedom fighter Koitalel Samoei, who is reported to have predicted the coming of the Whites and the construction of the colonial railway, was from the Talai clan.

The elders explained how Ruto had gone through various stages to become a leader. Agui said on June 6, 2006, Ruto had been crowned Kalenjin community leader during a declaration at Eldama Ravine town in Baringo witnessed by more than 26 MPs at that time.

Later on in 2012, more than 20,000 people, along with tens of political leaders, witnessed as Ruto was further crowned by elders from all Kalenjin subtribes during a ceremony at the Eldoret sports club.

“It’s with this background and the death of Moi that as elders, we wait for more than 40 days after his burial to carry on with the leadership succession in our community by handing over the leadership baton to Ruto,”Baasi said.

He said the same elders had given Moi the famous rungu that highlighted his 24-year rule. The rungu was passed on to Moi's son Raymond Moi, who subsequently handed it to Kanu chairman Gideon Moi during their father's burial in what symbolised the handover of the reins of power.

But Reverend Baasi explained that what happened during Moi’s burial was a family and not a community event and elders' way of passing over the leadership baton.

He said as elders they could not hand over a leadership baton before Mzee Moi was buried and before expiry of 40 days as demanded by tradition.

“So that was a family event and that is why it was Raymond handing over to Gideon. If was for the community the elders would have done it after 40 days,” said Agui.

He said as long as DP Ruto is alive, no other leader from the community would be given the same blessings as Ruto because the DP was officially declared as the Kalenjin leader and spokesman. 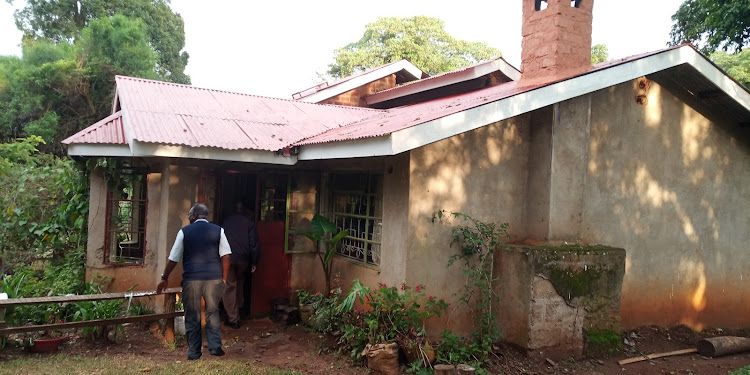 The home of the chairman of the Talai Council of Elders Reverend (Rtd) Canon James Baasi, where the DP's ceremony took place.
Image: BY MATHEWS NDANYI

“He now has powers to go out and hunt for the prize with the blessings of the community,” former MCA Amos Korir, who is also a Talai clan elder, said.

He said the event was significant because the Kalenjin would now recognise Ruto as their leader.

“What we did to Ruto was final and no one would come again for the same as long as he is alive,” said Korir, noting that the cultural blessings in the Talai or Nandi community date back to 1860.

“What elders gave to legendary leader Koitalel Samoei as blessings is the same as what we gave Ruto here on Friday including the Sambut and Rungut,” Korir said.

He said after Moi, no one had been blessed by the Talai clan.

Korir said by promising that Ruto would take over from him, President Kenyatta had equally endorsed Ruto’s leadership.

Sang said the Talai clan did not create Ruto to be a leader but only blessed him. “Within the Kalenjin a leader emerges and cannot be created. The elders only bless the leader who has emerged and in this case the elders felt the DP had emerged on his own to lead,” said Sang.

The Talai clan elders are highly revered and respected within the Kalenjin community and are said to have the power to predict good tidings besides protecting one from harm's way.

After the cultural rite, Ruto left the venue at around 8.30am. This came at a time when the DP is facing numerous hurdles within Jubilee in his quest to succeed President Uhuru Kenyatta.