President relaxes the curfew hours which will now be between 9 pm and 4 am.

• However, speaking at State House, Nairobi on Saturday, Uhuru announced the lifting of the cessation of movement of Kwale and Kilifi counties.

• The President also lifted Cessation of movement into and out of Eastleigh and Old Town from 4 am  June 7, 2020. 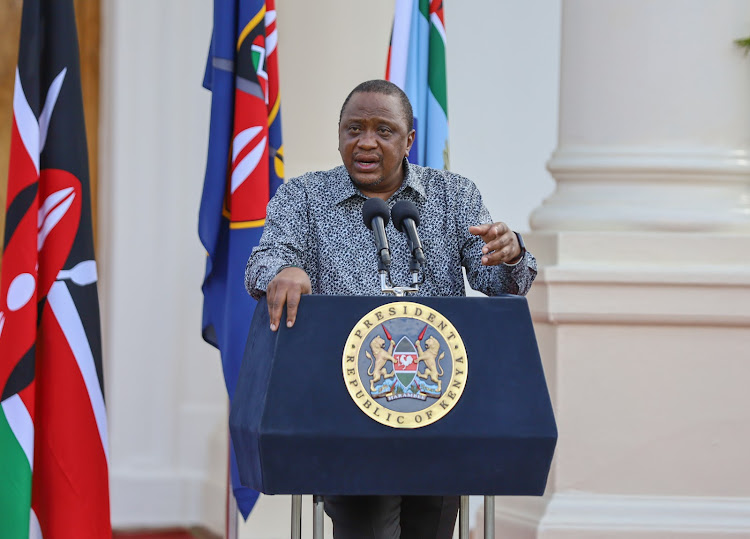 President Uhuru Kenyatta has announced an extension of the nationwide curfew by another 30 days.

However, the President relaxed the curfew hours which will now be between 9 pm to 4 am from June 7, 2020.

In accordance with the advice of the National Security Council, the President also extended the cessation of movement into and out of the Nairobi Metropolitan Area, Mombasa and Mandera counties by another 30 days.

However, speaking at State House, Nairobi on Saturday, Uhuru announced the lifting of the cessation of movement in Kwale and Kilifi counties from June 7, 2020, at 4 am.

The President also lifted the cessation of movement into and out of Eastleigh and Old Town from June 7, 2020, at 4 am.

The President said opinion was divided by his team of experts on whether or not to open the economy.

"We must accept that we are not dealing with a right or wrong opinion we are caught in between two rights. Those who want to open the economy are right and those opposed to opening the economy are also right," he said.

"We must speak truthfully to each other. The rate of infection in Kenya would have been very high had we not taken the measures we took."

Uhuru said that if the country had not taken the measures the rate of infections would have peaked and by the end of August approximately 75,000 Kenyans would have lost their lives with over 800,000 infections.

The President also announced the ban on all gatherings will also be extended for another one month while the gradual reopening of schools is now set to commence on September 1, 2020.

Uhuru announced that within seven days, the ministries of Interior and Health will constitute an inter-faith council for protocols of reopening of places of worship.

The President also extended international travel restrictions due to what he termed as the 'evolving nature of the disease globally'.

"In the meantime, the Ministry of Transport is directed within seven days from the date hereof, to engage all Key Stakeholders and develop protocols to guide resumption of local air travel," he said.

The President said the country's coronavirus infections now stand at 2, 600 after 126 new infections were recorded in the last 24 hours.

Uhuru also confirmed the number of fatalities has risen to 83 after four more deaths were recorded.

The country's incidence had spiked to 3.1 per cent from 2.1 per cent since the last extension.

Schools to reopen in September- Uhuru

Schools will have lost 17 weeks since they closed on March 21.
News
2 years ago

Ban on bars extended for 30 days

He also stated that he has extended nationwide curfew by another 30 days.
News
2 years ago
by DENNIS TARUS Digital Sub-Editor
News
06 June 2020 - 15:39