• Section 37(1) of the Elections Acts allows IEBC to re-allocate a seat belonging to an expelled Member of Parliament or County Assemblies to the next person of the same gender on the party list. 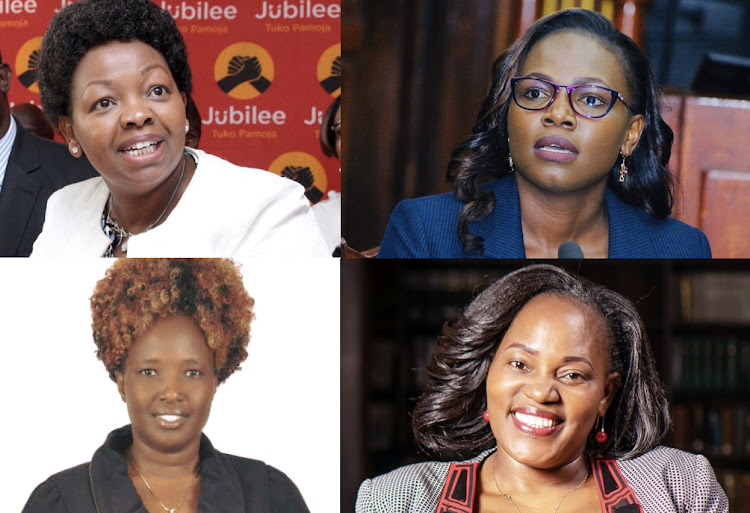 The likely beneficiaries of the Jubilee purge at the Senate

On Wednesday, the Jubilee Party kicked off a process that would see five of its nominated Senators lose their seats.

Though the process has just kicked off and would involve disciplinary hearings and possibly court battles, there are five women already on cue to join the Senate.

Replacing, the targeted five nominated Senators, once the process is complete, is a walk in the park for the Jubilee Party, as there already exists a list of candidates.

The IEBC is the custodians of the Partly Lists, which are used to allocate slots for the nominated seats in Parliament as well as County Assemblies.

The five are accused of snubbing President Uhuru Kenyatta’s meeting that led to the removal of Senators Kipchumba Murkomen (Elgeyo Marakwet) and Susana Kihika (Nakuru) as Majority Leader and Whip respectively.

While it is not easy for a party to replace an elected leader when they lose their seat, the Elections Act makes it easy for nominated legislators to be replaced.

Omanga among five nominated senators to be expelled for snubbing...

Section 37(1) of the Elections Acts allows IEBC to re-allocate a seat belonging to an expelled Member of Parliament or County Assemblies to the next person of the same gender on the party list.

If there are no more candidates on the list, Section 37(2) allows the party to nominate another candidate within 21 days of the declaration of the vacancy.

During elections, Political Parties give the IEBC their Party Lists with the nominees being listed in order of preference.

After the elections, depending on the number of elected leaders that parties get, the IEBC allocates the nominees to the available slots.

In 2017, the Jubilee Party gave the IEBC 49 lists – 47 for country assemblies and one each for the Senate and the National Assembly.

Four on the list facing the axe were picked from the 16 women while the fifth was from the youth list.

The four, if finally removed, would be replaced by the next four on the list who are Caroline Daudi, Jelagat Kamuren, Beatrice Gambo who are all listed as business ladies and former Jubilee vice-chair (strategy) Veronica Maina.

At the 2017 elections, Daudi served in the Jubilee Elections Board, Gambo was Jubilee Mombasa County coordinator while Kamuren was an aspirant for the Nakuru West Constituency.

The person who would replace Victor Prengei would be Wambui Nyutu, who is a member of the National Cohesion and Integration Commission.

However, a consideration on ethnic diversity and regional balance could also see Kamuren and Maina lose out.

Their respective ethnic groups - Kalenjin and Kikuyu - are already represented in the existing nominated Senators.

This would then see Mary Adhiambo, listed as a business lady, and Judith Kerubo, a teacher get the two slots.

This principle was a subject of the courts after the 2013 elections after Lydia Mathia took IEBC to court for skipping her and giving a slot to Naisula Lessuda on the TNA partylist.

Mathia went up to the Court of Appeal but her case was dismissed saying that IEBC was justified in replacing her for the “sole purpose of stratifying requirement of Article 98” as TNA had failed to do so.

Nyutu’s chances could also be on the balance as she is not of the same gender as Prengei. In addition, she is a State Officer and would be required to quit first before joining the Senate.