How Uhuru jumped off 'sinking ship' Kanu in 2012

• Ahead of this meeting, wrangles had rocked the party after a decision by Uhuru in 2007 to support the re-election of President Mwai Kibaki.

• Just before the launch of TNA on May 20, 2012, Uhuru walked out of Kanu and was replaced with Gideon at a special NDC that was called by Salat. 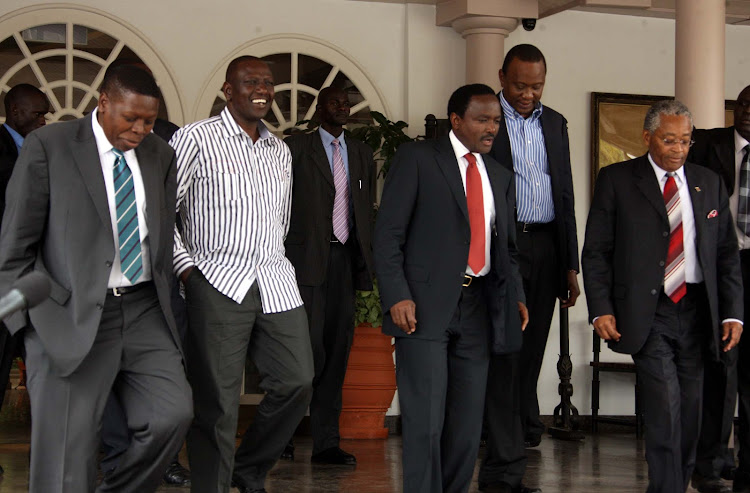 The move by President Uhuru Kenyatta's Jubilee Party to get into an alliance with Kanu has invoked raw political flame among his supporters.

Eight years ago, Uhuru jumped out of what his allies called 'a sinking ship' and joined forces with Deputy President William Ruto who had already left Kanu years before him.

The two had been in Kanu since the start of their political careers until the moments ahead of the 2007 elections when Uhuru remained in Kanu and supported PNU while Ruto was in ODM.

The latest move, seen to have been engineered by Uhuru's allies, is likely to further widen the rift between the President and his Deputy.

On December 16, 2011, as Kanu chairman, Uhuru called a retreat of the party's National Executive Council in Naivasha.

Ruto had already left Kanu by then and was out of ODM having formed another outfit - UDM before later forming URP.

The meeting at the Great Rift Valley Lodge was attended by all the top brass of the party as the former ruling outfit sought to reengineer itself ahead of the upcoming elections.

Ahead of this meeting, wrangles had rocked the party after a decision by Uhuru in 2007 to support the re-election of President Mwai Kibaki.

Effectively, this rendered Kanu a moribund outfit as it was a minority partner to Kibaki's Party of National Unity.

By May of 2011, there were calls from within Kanu for Uhuru to quit for failing to revitalise the party

This December 2011 meeting was the first since 2007 when Uhuru announced his support for Kibaki, who had beaten hi in the 2002 elections.

At the time of the Naivasha meeting, Uhuru was a deputy Prime Minister in the Grand Coalition government and had been instrumental in leading the Kibaki side during the Constitution-making process in 2010.

Moi and his camp were determined to kick Uhuru out of Kanu and take control ahead of the presidential election in 2012 - that was later pushed to 2013.

At the end of the second day, Saturday, December 17, 2011, Kanu had not made any headway on how it would strengthen its structures that had been weakened after losing to a united opposition in 2002.

However, at the two-day retreat in Naivasha, Uhuru had insisted that he was still committed to the party and was looking forward to having him or Gideon run as the party's candidate at the elections.

Uhuru also committed to calling a National Delegates Conference at the beginning of the new year so that the party could have its elections and chart a way forward.

Inside Gideon Moi’s plan to revamp, re-brand Kanu ahead of 2022

Kanu to re-brand, change name to Kanu-Fresh
News
1 year ago

Though he also stated that the party was not focused on the idea of forming alliances, he noted that "We are not closing our minds to anything but we do believe that whoever we agree to work with."

But what Gideon and his camp did not know was that behind the scenes, Uhuru was already structuring a new party if he lost control of Kanu.

At an informal sitting later that evening, Uhuru and his allies were clear that the possibility of his exit was just a matter of when not if.

Uhuru's move to start preparing for an exit from Kanu was driven by constant attacks by Secretary-General Nick Salat, a close ally of Gideon.

For Uhuru, Gideon was using Salat to attack him as they wrestled for the control of the party and thus his stay in the party was no longer tenable.

In early 2012, Uhuru called three NDCs that were all cancelled with the DPM claiming that there were too many sideshows

"Salat has been an obstacle to the process of compliance as agreed in Naivasha last year," Uhuru said at one time in April 2012.

At the time, Uhuru was already engaged in talks with Eugene Wamalwa, William Ruto, Raphel Tuju, Kalonzo Musyoka, Chirau Mwakwere and George Saitoti in what was at the time called the G7 Alliance.

His key strategists including David Murathe and Njee Muturi had already taken over the National Alliance Party of Kenya which was rebranded to TNA, the party on which he won the presidency in 2013.

Just before the launch of TNA on May 20, 2012, Uhuru walked out of Kanu and was replaced with Gideon at a special NDC that was called by Salat.

Uhuru had in March of the same year, asked a Gema meeting called to endorse him as Mt Kenya kingpin to give him a month to tell them which party he was going to run on.

At the time - just a month before the launch of his new party - Uhuru termed the NDC at Kasarani an "illegal gathering".

Kenya has had a long history of unstable environment of multi-party democracy. Since Independence, parties have been unable to sustain momentum of ...
Siasa
3 years ago

Uhuru said that he was vying for the Presidency and this it was not tenable for him to continue being Kanu chairman or vie for the position again given the new laws arising from the 2010 Constitution.

"It is insincerity and doublespeak that has been our greatest challenge in building Kanu," Uhuru said on April 11, 2012.

Among those who joined Uhuru in the walkout from Kanu was then organising secretary Justin Muturi, now National Assembly Speaker.

"The NDC is illegal and if this persists, I also do not have any option but to jump ship. This is clearly a ship that is leaking heavily and sooner or later we have to find a new home," Muturi told this writer at the time.

On May 20, 2012, Uhuru launched his new party TNA calling it the party of the future before joining hands with Ruto in the Jubilee Coalition which later in 2016 became the Jubilee Party.

"Parties have come and gone since the pre-colonial era. Ideologies have been hatched and crushed even before the ink has dried on party manifestos and many are forced to believe that parties are only a means to gain power," Uhuru said during the TNA launch at KICC

It now remains to be seen if the new deal between Uhuru and Moi will shape the country's next political phase.