How an imam spread coronavirus in Eastleigh

Despite knowing his status, the cleric continued praying in mosques and visiting different houses.

• On Saturday, 24 cases were reported countrywide, Sunday 30 cases and 25 on Monday. 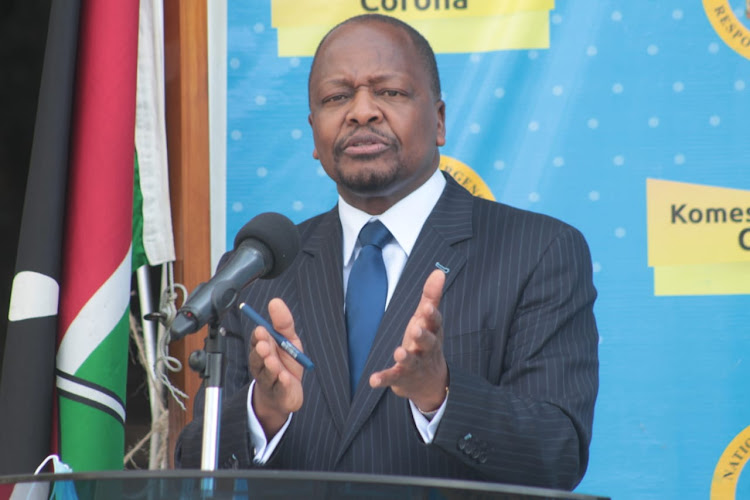 An imam with the coronavirus kept spreading it in Eastleigh, Nairobi until he died last month.

The cleric, who lived in the area, had tested positive for Covid-19 and died on April 16. He was buried the same day.

Despite knowing his status, the Imam continued praying in mosques and visiting different houses.

"This was a reckless and irresponsible act by the imam," Health Cabinet Secretary Mutahi Kagwe said.

Kagwe on Tuesday said 29 new cases were from Nairobi and all of them from Eastleigh.

This raised the total number of confirmed cases in Eastleigh to 63, making it a hotspot in Nairobi.

Although Eastleigh Business Community secretary general Omar Hussein had announced the closure of businesses, a spot check yesterday showed that most shops were open.

With about 350,000 people, Easleight is as busy as pre-corona days. Food stands, clothing stores, and electronics shops were operational yesterday, with shoppers not wearing masks and making nonsense of social distancing requirements.

Women in hijabs were chattering on their phones, while men sat on plastic chairs outside local restaurants, drinking black tea.

Eastleigh is mainly occupied by Somalis and has become a vibrant commercial centre.

"We will simply cancel licences and close the shops and restaurants," Kagwe told the Star.

Kenya has not conducted enough Covid-19 tests to ease containment measures against the disease, experts say.

The number of positive cases in the country as of yesterday was 535 after the Ministry of Health confirmed 45 new cases.

The total number of tests conducted since the first case is 25,869. Several experts warned that this number is too low to support policy decisions such as reopening of restaurants and schools.

"The last four days confirm that we have yet to reach the level of testing that policymakers can use this kind of data to make decisions on the spread of Covid-19," said veteran public health expert Richard Ayah.

On Saturday, 24 cases were reported countrywide, Sunday 30 cases and 25 on Monday.

"The rise in positive cases in tandem with the rise in the number of tests confirms that we have been under-testing and likely there are many more people with the disease than the ones reported," added Dr Ayah, who is also the director of the University of Nairobi’s Science and Technology Park.

Yesterday, CS Kagwe threatened to close for six months restaurants that were opened last week for flouting the rules.

Experts said the reported number of new infection may increase as the government expands targeted testing in high-risk areas.

"What we're witnessing is sustained community spread among people who are at high risk," said infectious disease epidemiologist Dr Nanyingi Mark from UK's University of Liverpool.

He said people in slums and densely populated estates in major urban centres are at most risk because they can hardly practise the required public health measures.

"For instance, those in slums may not practise social distancing and proper hygiene," he said.

Dr Nanyingi, also a public health don at the UoN, said the higher numbers announced this week could mean contact tracing is now more effective, which means more infected people are being tracked and found.

He faulted reopening of restaurants, saying they will just create new epidemic foci or new points of origin of infection.

"Supposing there is an infection at a restaurant when people congregate there, it is likely they will pick the infection and spread it further at home," he noted.

Head of the Lancet Laboratories Dr Ahmed Kalebi noted that expanded testing does not necessarily yield more positive cases unless it is targeted.

"If the population tested is widened whereby those tested have less prevalence then the positive numbers won’t necessarily increase," he said.

He said despite the low number of Covid-19 tests done in Kenya, the curve looks relatively flat when compared with countries that went on to flatten their curves.

"This bodes well for mitigating the outbreak," he said.

The new 45 cases were from 1,077 samples tested in a day, CS Kagwe said yesterday.

Nine more people were discharged from hospital, bringing the total number of patients who have successfully undergone treatment and recovered to 182.

The new cases are aged between two years and 87 years.

Out of the total confirmed cases, 29 are from Nairobi’s Eastleigh estate while 11 are from Mombasa. Eastleigh now has a total of 63 cases and is the leading estate in Nairobi. Kawangware has 24.

Wajir county recorded five more positive cases, while one of the cases in a foreign national. Wajir cases had a history of travel from Mogadishu.

Kagwe noted some restaurants are flouting the social distancing rules by allowing customers to crowd at the cashier points.

In addition, some do not have handwashing facilities, while others have been accused of operating outside the recommended hours of 5am to 4pm.

“We will escalate or de-escalate measures depending on the behaviour that we observe. This is no exception."

Kagwe said the decision to reopen the restaurants was supposed to act as an intervention to secure some form of livelihoods for some people even as Kenyans observe the measures that the ministry had taken.

“It is true that it has been abused. It is a fact that people have been going to pubs or eateries, they order one sausage with two beers, they eat that one sausage and the two beers, leave and enter another restaurant and order the same, then move to another, ask for orange as a dessert with two more beers,” Kagwe said.

"We've got a challenge. It's good for us to accept that there is that challenge when we start taking steps, for surely we must take steps. Let not the same individuals start complaining that you know we are going backwards and forwards. If that is the case, so be it.”

At least 12 per cent don't know any of the symptoms, 18 per cent yet to implement preventive measures
News
2 years ago

MP Aden Duale leads talks with traders on resumption of operations.
Counties
2 years ago
Post a comment
WATCH: The latest videos from the Star
by MAGDALINE SAYA AND JOHN MUCHANGI
News
06 May 2020 - 07:16
Read The E-Paper