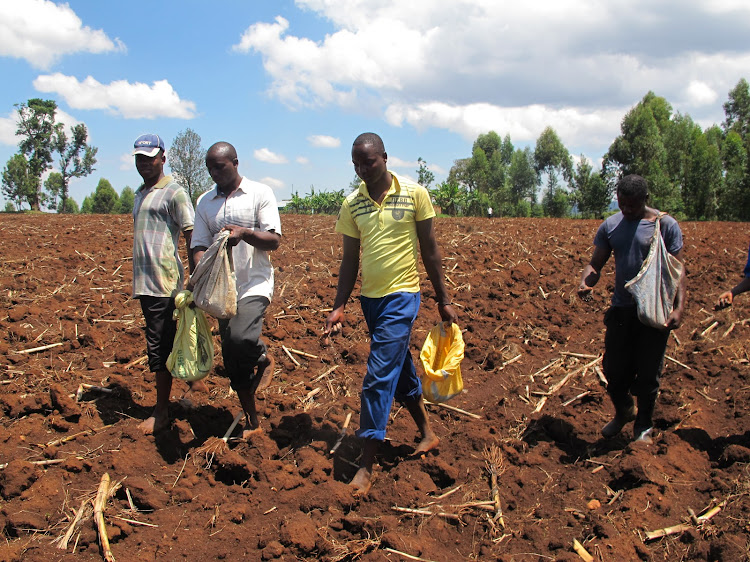 The planting season in some areas has been delayed due to the ongoing heavy rains.

Agriculture Principal Secretary Hamadi Boga said the long rains planting season started in February in some areas but late planting was ongoing in others.

“Those in flooding areas like Western, Coast and Tana River have to wait until the rains subside so that they can start planting short-season crops such as cowpeas and pigeon peas,” he told the Star on the phone on Tuesday.

Boga said that fertiliser is available in the market at between Sh2,800 to Sh2,700.

He said a container of top dressing fertiliser is being offloaded at the Port of Mombasa and farmers will receive it on time.

Kipkorir Menjo, chairman of the Kenya Farmers Association, confirmed that the price of a 50kg bag of fertiliser has reduced compared to last year.

Menjo told the Star the move to allow private dealers into the fertiliser business had brought the prices down.

“This has ensured that the market has quality fertiliser and the prices are affordable to farmers,” Menjo said.

This, Menjo said, is a reasonable price compared to Sh3,400 for the same bag of fertiliser last year.

He said most of the farmers in the lowland areas in the North Rift have already planted.

“But farmers in the highland areas are still to finish because they normally plant at the end of the month,” Menjo said.

In some areas, floods have swept away the nutrients of the topsoil. But it is better to have the rains than not, he said.

The May forecast by the Kenya Meteorological Department shows that the long rains in parts of the country will end this month. Only the Coastal region and Western Kenya will experience more rain.

The outlook for May indicates that parts of the Lake Victoria Basin region and Western Kenya, Central & Southern Rift Valley, Central Kenya including Nairobi and North Western Kenya are likely to experience slightly enhanced rainfall.

“Counties in the Coastal region, Southeastern, Northern and Northeastern are likely to receive near average with a tendency to below-average rainfall,” the forecast shows.

The expected rainfall is likely to be conducive for agricultural production especially in the high-potential counties of Trans Nzoia, Uasin-Gishu, Kakamega, Kericho, Kisii and Nandi.

Near-average to above-average rainfall is forecasted and also expected to continue into the June-July-August period in those areas.

How to get the best results from planting

Before planting, you need certain steps to minimise yield-limiting factors
Sasa
1 year ago

Complain that the prices of farm inputs had increased as has the cost of labour
Counties
1 year ago
by AGATHA NGOTHO Science Writer
News
05 May 2020 - 23:00