Group says appointment was not preceded by a declaration or advertisement of vacancies, applications or interviews

• Lobby says his appointment violates the section of the law on transparency and fair completion as there was public participation.

• Says to qualify for office, one has to be qualified to be a High Court judge but Githinji retired from the Court of Appeal. 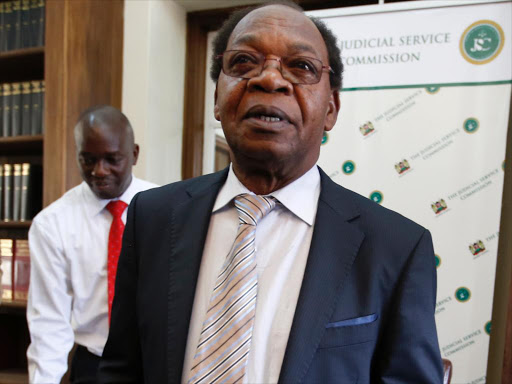 Retired Judge Erastus Githinji will not be sworn into office as the new chairperson of the Tax Appeals Tribunal.

This is after the Employment and Labour Court barred him from taking over the office temporarily pending hearing of a case filed in court.

Justice Hellen Wasilwa issued temporary orders barring the retired judge from taking the oath of office or assuming he functions of the office.

She directed CCM to serve all the parties pending the inter-parties hearing on May 12.

In an affidavit by their director Georgiadis Majimbo, the lobby group argues that Justice Githinji’s appointment violates the section of the law on transparency and fair completion as there was public participation.

“On April 15, the Treasury CS appointed Githinji to be the chairperson of the Tax Appeals Tribunal for a term of five years effective the same date,” court documents read.

Majimbo says he is aware that Section 4 (3) (a) of the Tax Appeals Tribunal Act, 2013 provides that a person shall not be appointed chairperson to the tribunal unless that person is qualified to be appointed as a Judge of the High Court.

Further, CCM claims that the appointment was not preceded by a declaration or advertisement of vacancies, applications, or interviews.

Majimbo further argues that the culture of recycling retirees to public office violates the state’s obligation under the law to oversee representation of Kenya’s diverse communities and affording adequate and equal opportunities for appointment, training and advancement including men and women, the members of all ethnic groups and persons with disabilities