WORK IN TIMES OF PANDEMIC

Arguing a case with a mask on frustrating, says lawyer 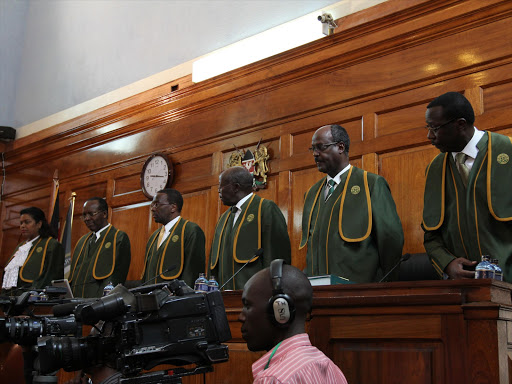 Most lawyers are working at home after the Judiciary scaled down court  operations to stop the spread of Covid 19.

However, some continue with daily routines albeit with challenges due to the strict health measures put in place by the state to fight coronavirus.

Shadrack Wambui  is one such lawyer.  He has been going to work  five days a week.

He and his boss Danstan Omari have filed and argued several matters during this period.

They represented the second wife of a senior CBK employee who got orders stopping his burial and eventually won the case, with the court ruling that she is also the man's widow.

The body was released to the two women and transported for burial days after President Uhuru Kenyatta restricted movement into and out of Nairobi, Mombasa, Kilifi and Kwale.

Wambui's day starts at 3am with some reading.  Unlike pre-Covid-19 days  when he used to leave home at 5.30am, he now he gets out of the house at 7am since there is no traffic.

The lawyer-cum-amateur boxer says things have not been easy  since the Covid-19 restrictions including the dusk-to-dawn curfew were introduced.

“There is the requirement that we need to file matters online first, then wait for assessment. The worst part of it is you don’t know who is doing the assessment,” he says.

They end up waiting for two to three days and the case might lose its urgency unlike before when the cases were filed physically.

“One would have expected that using technology could have eased the process but in reality, it has made the process slower,” Wambui says.

The court sittings he has attended are held outside, which is different from what lawyers are used to.

"People fear each other and they sit very far from one another because you never know who is a carrier of the virus."

But the most challenging bit about appearing in court in these times is wearing a mask. “Can you imagine wearing a face mask and you are arguing before a judge or a magistrate for few hours?” Wambui asks.

“We are taught to utilise both verbal and non-verbal cues. Non-verbal cues often demonstrate the gravity or otherwise of what you are saying. Using a mask denies us a very instrumental tool in our line of work,” he says.

“In our office, we have changed sitting arrangements and how we interact with our clients. Before, they used to sit near the desks but now we have to observe social distancing.”

Wambui has had to decline meetings with clients who call him to their homes considering the curfew. Evenings are the best times to go for such meetings.

The nature of his work is such that he receives assignments in the evening and the morning while afternoons are meant for court proceedings.

“The practice of law is a tool for social engineering and it demands that you become social, which we can’t do now because of the ban on social gatherings.”

Wambui says most lawyers find clients in social settings like weddings, clubs and funerals, which have all been banned.

“Law is social. You have to be in social gatherings to fully utilise your potential as an advocate. It is my belief that the creation of wealth as a legal practitioner means more of running into people not running away from them.”

The lawyer says due to the scaling down of activities in the Judiciary, old matters have become dormant as the courts deal mostly with new matters.

Before the coronavirus, Wambui would be home at around 11pm but due to the curfew, he must leave office at 4pm to be home before 7pm.

Since the social hall in Kayole where he trains as a boxer is closed, he has resorted to being his own coach and trains between 7pm and 9pm at home.

He trains with his daughter, who has also taken a liking to the boxing.

“The boxing club in Kayole has of course closed and everyone is training privately. The beauty of our club is our late coach had trained each of us to be a coach and now I train with my daughter,” Wambui says.

Because of the curfew, what he used to do in 24 hours must now be done in 12 hours.

“My parents live in Nairobi and now I can’t see them as I used to almost every weekend. I don’t want to expose them as I might be a carrier,” he says.

Wambui, like the LSK president Nelson Havi, is of the view that the Judiciary should open courts.

“The time is right to open courts. Barbershops and salons are operating and they have closer contact than a judge, clerks and lawyers who will be in court,” he says.

According to him, all that is needed is to reduce the number of people in a court, not closure of Judiciary operations.

“We are supposed to be allowed to go anywhere across the country to represent our clients because that’s what fair trial requires,” Wambui says.

Lawyers qualify as essential service providers and should be allowed to represent their clients wherever they are, he maintains.

“You cannot frustrate the smooth running of courts while other service providers like matatus and barbershops are operating. But I also hold the view that a balance needs to be struck so that we do not put any judicial staff, officers or advocates at risk of contracting the virus.”

Post a comment
WATCH: The latest videos from the Star
by ANNETTE WAMBULWA Court Reporter
News
20 April 2020 - 23:00
Read The E-Paper