Uhuru has the last word on your concerns, Tuju tells Ruto allies

Asked members to refrain from airing their issues on both mainstream and social media.

• Briefing members, Tuju said the objections that were raised by close to 346 members will be resolved.

• He said the decision will be guided by the law and by consultation with the party leadership as required by the party constitution. 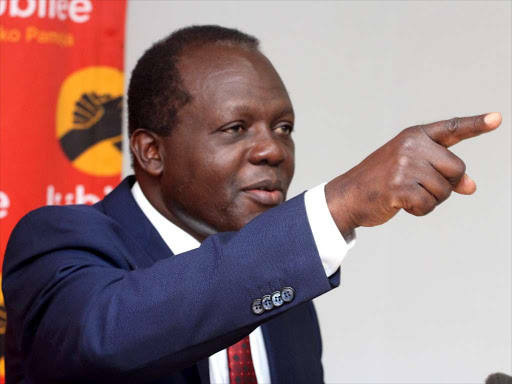 Jubilee Party Secretary-General Raphael Tuju has assured members that concerns raised over the nomination of members to National Management Committee will be addressed.

He, however, noted that the ultimate authority lies with President Uhuru Kenyatta who is the party leader.

This was even with concerns being raised on how Jubilee Vice-Chairman David Murathe ended up in NMC meetings while the party Constitution did not list his position as a member.

Briefing the members, Tuju who has come under fire on the manner he handled the matter said the objections raised by close to 346 members will be resolved.

"The Party will in due course and as circumstances permit given the trying season that confronts the nation and indeed the world, consider the issues raised regarding the aforesaid matters and reach the decision that it deems proper and fit in its best interest," Tuju said.

He added that "Its decision will be guided by the law and by consultation with the party leadership as required by the constitution."

On Friday Registrar of Political Parties, Ann Nderitu put on hold changes to the NMC citing objections by the members.

Nderitu instead directed Tuju who had written to her proposing the NMC changes, that the party should use its internal dispute resolution mechanism to resolve the row.

In the two page briefing detailing how he arrived at the decision to nominate the names, Tuju appeared short of telling the members majority of whom are allied to Ruto that the ultimate way forward rests with President Uhuru Kenyatta.

He said: “As party members are aware, the ultimate authority in the party lies with the Party Leader who, by virtue of Article 9.1(3) has power to “Issue directives for the performance of specific acts or omissions thereof in furtherance of the objectives of party or fulfilment and compliance with party manifesto, programs, values and ideals” while under the same Article “ the Deputy Party Leader shall deputize the Party Leader, and shall perform such functions as the Party Leader may direct him or her to do.”

He asked the members to refrain from airing their issues on both mainstream and social media calling on them to join efforts in combating the Covid-19 crisis.

“This is not the season for politics and advancing personal ambitions at any cost but “the season for sacrificing self for the greater good," Tuju said.

“It is imperative that all party officials and members to refrain from issuing unproductive and incendiary press and social media statements. All our efforts should instead be singularly directed to assisting the Party Leader and all Kenyans to combat the corvid-19 pandemic in whatever way that they can,” he said.

Members are leaders of some of the parties dissolved to form Jubilee in 2016.
News
1 year ago
by GIDEON KETER Political Reporter
News
18 April 2020 - 19:44