Why Kenya isn't out of virus woods yet

The few reported cases - 189 by Friday - have likely created a false sense of security.

•But the analysis also provides reason for hope — suggesting a path forward to avoid the worst outcomes.

•MoH epidemiologists expect the real horror show will begin in the coming weeks when testing is expanded. 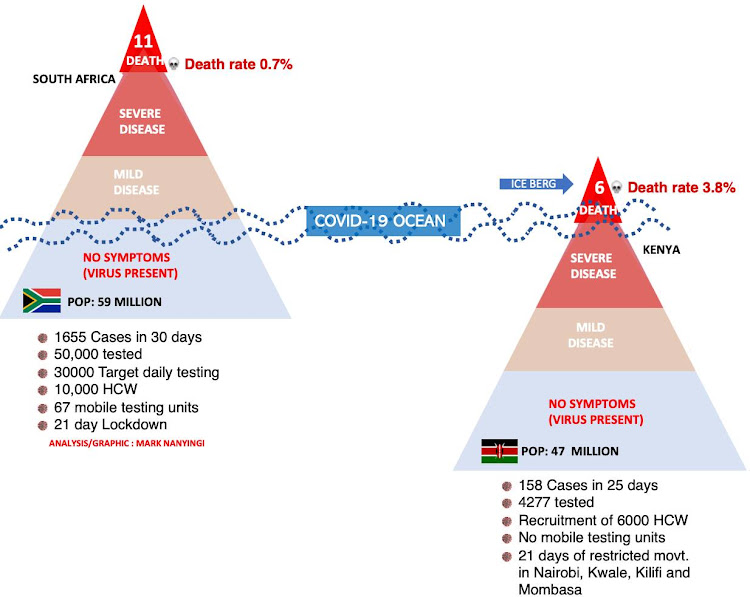 A model created by Dr Mark Nanyingi on April 6 shows the bulk of Kenya's cases are untested, creating a false sense of security.

Many more Kenyans infected with the coronavirus will be identified as the government greatly expands testing,  processing more than 600 a day starting next week.

Stand by for a horror show when the real number emerge, say the Ministry of Health and epidemiologists outside the ministry - unless the strictest measures are observed.

The number could rise to thousands because most of the infected people have probably not been tested and are still spreading the virus, the MoH says.

MoH acting director general Patrick Amoth said it's possible reported cases may rise to the projected 10,000 by the end of April of in May.

The projection confirms Kenya is not out of the woods yet, and the few reported cases - 189 by Friday - have likely created a false sense of security, while death tolls are in the thousands in Europe and the US.

This is despite the fact that only five additional people were announced to have tested positive for the virus, while 10 were discharged, having recovered.

MoH acting director general Patrick Amoth said it's possible reported cases may rise to the projected 10,000 by end of April or in May.

"Yes, we still stand with the projection we gave you earlier.  The reason is that we've not gone to do community testing and the results we've been relaying to you are from our quarantine sites and a few cases picked by our rapid response team. So we still stand by our earlier projection," Amoth told journalists on Friday.

Late last month, the ministry said it will base its response on the assumption that about 10,000 Kenyans will be infected by the end of April.

However, that worst-case scenario can be avoided if the government rigorously promotes public health measures like handwashing and social distancing.

"We don't know what is going to happen, whether the figures will match or not, taking into consideration the measures we've taken will also work in our favour," Amoth said. 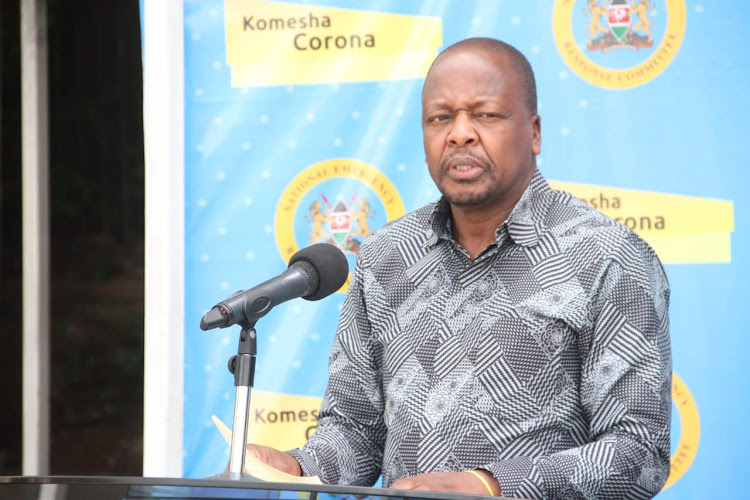 Projections created by epidemiologists also show the numbers will rise exponentially, only slowing down according to how well the public adheres to public health measures.

The ministry this week is expected to expand its testing, and process more than 600 tests a day.

As the ministry captures more people with the disease, it will also capture more people killed by the same virus.

This means the number of reported deaths will go up, before coming down.

Amoth said it is likely some people were killed by the virus but their deaths were registered as having been caused by pneumonia.

He said people presenting with severe pneumonia must now be tested for Covid-19.

Last week, Dr Mark Nanyingi, an infectious disease epidemiologist, also said that it is likely more Kenyans are infected and more have died.

"It’s not clear which models are being used by the Kenyan government. Their data sharing protocols lack transparency and therefore there is also uncertainty over the status of the disease within the country," he said.

He said globally, Covid-19's mortality ratio is roughly between three per cent and four per cent.

"For Kenya, this implies that – in the worst-case scenario – 40 people may die for every 1,000 confirmed cases if no intervention is put in place," he said.

If the curfew, handwashing and social distancing campaigns are not adhered to, more than 28 million Kenyans will get coronavirus this year - Dr Nelly Yatich.

Nairobi-based epidemiologist Dr Nelly Yatich places the percentage of people who will die from the disease at five per cent.

"I chose to stick with the global case fatality rate of five per cent because even though we have a youthful population, we grapple significantly with both communicable diseases – Aids, tuberculosis, malaria, pneumonia, etc - and non-communicable illnesses," she said.

If the curfew, handwashing and social distancing campaigns are not adhered to, more than 28 million Kenyans will get coronavirus this year, she said.

However, Dr Yatich said if the current measures are adhered to strictly, it is possible to reduce deaths to one per cent.

In neighbouring Uganda, modelling released by the Ministry of Health shows Uganda will have 18,878 cases (at a 3 per cent fatality rate, 566.34 deaths) by April 31.

“This is unbearable for our already constrained health system, and something had to be done, immediately,” Health minister Dr Jane Ruth Aceng said last week.

Uganda used the model to justify the country’s severe lockdown.