• In his condolence message on Tuesday, Uhuru said the late Nzeki's servant leadership shall be missed by Kenyans. 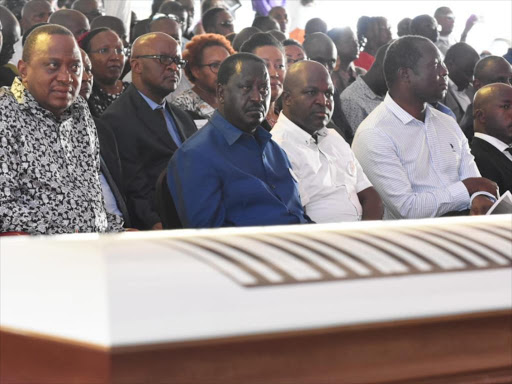 President Uhuru Kenyatta has described the late Emeritus Raphael Ndingi Mwana a'Nzeki as a loving and outstanding man of God.

The former Archbishop passed away on Monday night at the age of 88.

In his condolence message on Tuesday, Uhuru said the late Nzeki's servant leadership shall be missed by Kenyans.

"Ndingi was one of the brightest lights to have graced our nation in our time," he said via Twitter on Tuesday.

"Kenyans knew they could always count on him to stand and speak out for truth and justice whatever the threat that posed to his life."

Raila who is also the ODM party leader said Kenya will miss Nzeki's service and dedication.

"I join all Kenyans and the Catholic Church in particular in praying that God places his soul in eternal glory," he said.

"As a country, we will miss his distinguished service and dedication to humanity. Fare thee well. "

Nzeki was ordained as a priest in 1961 where he served under then-Archbishop JJ McCarthy of the Nairobi Diocese.

He was ordained as a bishop in 1969 and served in that capacity in the dioceses of Machakos and Nakuru before being appointed as Coadjutor Archbishop of Nairobi in 1996 as an assistant to then-Cardinal Maurice Michael Otunga.

Nzeki succeeded Cardinal Otunga on April 21, 1997, as the Archbishop of Nairobi.

He was retired by Pope Benedict XVI on October 6, 2007, after attaining the age of 75 years.

He was succeeded by the current Cardinal John Njue who was his assistant in Nakuru.