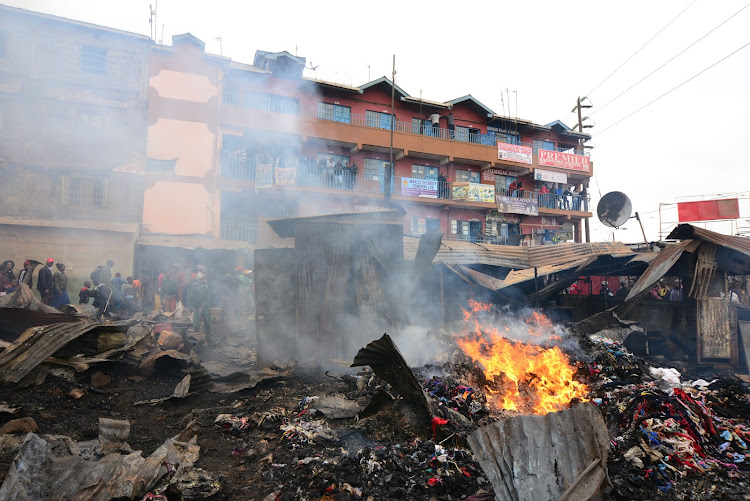 Grace Omweri, 27, is a tea vendor in the popular Githurai market in Kiambu county.

The mother of two opens her tea hawking business from 7pm to 5 am serving mostly boda boda riders and lorry drivers.

From Friday night, life will not be the same again for millions of Kenyans whose movement at night will be limited as the government imposes strict measures to slow down the spread of coronavirus.

While the state listed transportation of farm produce as exempt from the night curfew, there are fears authorities would crack down on transporters as  movement at night will be curtailed.

Jobs in sectors not classified as essential are on the line, including large manufacturing companies that have night shifts for staff as well as the matatu sector that employs thousands of drivers and conductors.

The matatu sector will be hard hit with total paralysis at night, a scenario that will see chaotic scenes on day travel in the coming days.

The 10-hour curfew means those who ply their trade at night will be out of business.

From boda boda riders, taxi drivers to matatu drivers and conductors, the curfew is likely to bring about far-reaching economic consequences.

“My customers include lorry drivers who ferry farm produce from as far as Kisii to Githurai. By 2am drivers who have arrived are so exhausted and need some coffee to warm themselves up,” Omweri told the Star at her shop in the popular open air-market.

For Omweri, life is about to be a total hell given that her husband is bedridden after injuring his back in a freak road accident last year.

She is the family breadwinner and knows no other way of survival.

“I make up to Sh500 a day and when the business flourishes I can take home some Sh700. That is what my family depends on,” she said.

Seated on a stool, Omweri said she delayed going home to her single room house at Keroka estate to collect payments from debtors.

“As you can see, these 10 lorry drivers deliver cabbages from Molo thrice a week. They usually pay me every Thursday. So I had to delay going home a bit to get the payment,” she said.

She has no idea how her young family will survive in the coming days.

“Only God knows. I don't think I can manage to hawk my tea and coffee during the day because of high competition. Remember, my beverages sell highly during the cold weather that accompanies nightfall,” she said.

Next to Grace stood a "professional maize roaster”, as they call him around the area.

Joseph Njuguna, has been roasting maize at the densely populated market for 10 years but now wonders how life will change all of sudden for him this Friday.

“My customers are usually night watchmen who offer security around the market and these drivers delivering produce at night. But look, from Friday night the government says everybody should remain at home. We leave that to God,” Njuguna, 43, said.

He and his family will have nothing to eat and no money to meet other basic needs because he must close his business.

“How do we fight coronavirus from home on empty stomachs? We could have been allowed to do our businesses around and given the best sanitation. But we have been told to go and lock up ourselves at home hungry,” Njuguna said.

He treks daily from his Zimmerman home for about an hour to reach his place of work in Githurai at around 7:20pm. He makes sure after leaving in the morning he has bought enough green maize for roasting in the evening.

“I have been doing this business for the last 10 years. After dropping out of school in Class Seven I came to Nairobi from Nyeri to stay with my uncle who was also roasting maize here,” he said. Njuguna makes up to Sh600 daily.

Justus Angima is Njuguna's favourite customer who has never missed his roasted maize every time he gets to Githurai.

“Whenever you want the true taste of fresh roasted maize, here is the place,” Angima says, praising for Njuguna's expertise.

“When taken with some hot tea from Grace then you don't need any food.” That is a full meal for Angima.

Families are headed for uncertain times as the government has not announced any social security measures to protect them from the disruption.

Kenyans inteding to travel at night will have to suspend their plans, resulting in loss of business for public transport operators.

“What not travelling at night means is that there will be overwhelming bookings during the day. The sector will not cope with the high numbers of those traveling during the day,” said Peter Ratemo, a manager with 2NK matatu company.

The curfew will interfere with the supply of goods especially produce to markets in urban centres resulting a rise in the prices of basic commodities.

"I don't think that the government would allow us to move at night. We usually begin our journeys during the day and then arrive here at night," said an apprehensive John Orita, a lorry driver transporting produce from Molo to Wakulima market, Nairobi.