• Professionals offering critical services are exempted from the curfew. 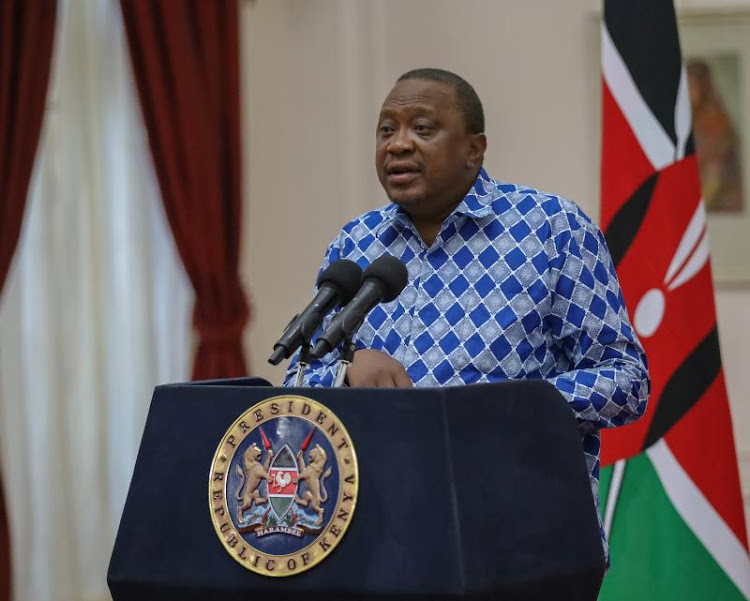 Kenya goes into a 10-hour countrywide daily curfew beginning Friday at 7pm for the first time since the 1982 coup attempt.

President Uhuru Kenyatta imposed the dusk-to-dawn restriction yesterday to reduce movement of people as one way to slow down an expected surge of coronavirus infections in Kenya.

The 7pm-5am lockdown  is the first national curfew since the late President Moi imposed a similar order after the August 1, 1982  abortive coup.

Uhuru said the curfew was recommended by the National Security Council, which he chairs.

"The National Security Council has sanctioned and caused the issuance of Public Order Number 1 on the Coronavirus Pandemic," he said.

Uhuru spoke in a televised address to the nation from State House, Nairobi, yesterday evening.

He added: "Effective Friday, 27th March, 2020, a daily curfew from 7pm to 5am shall be in effect in the territory of the Republic of Kenya, with all movement by persons not authorized to do so...being prohibited between those hours."

Other members of the NSC are the Deputy President, Cabinet Secretaries for Defence, Foreign Affairs and Internal Security, the Attorney General, the Chief of Kenya Defence Forces, director of the National Intelligence Service and the Inspector General of the National Police Service.

Professionals offering critical services are exempted from the curfew. They include health professionals, national security, administration and coordination officers, workers in licenced pharmacies and drug stores and the media.

Kenya Power staff and workers in supermarkets, petrol stations and other oil products and lubricant distribution outlets are also exempted.

Uhuru said licenced telecommunication operators and service providers, banks, other financial institutions and financial services staff will be excluded from the curfew.

Others exempted are the fire brigade and other emergency response services and licenced security firms.

Uhuru announced an additional three new coronavirus cases, bringing the total number in the country to 28.

One positive patient has fully recovered and tested negative, which means only 27 now remain positive, the President said.

“More importantly, we have today registered one recovery of the patients.  This is a clear indication that we can and we will beat the virus,” he said.

The head of state further directed that Sh1 billion from the Universal Health Coverage kitty be immediately appropriated strictly towards the recruitment of additional health workers to support in the management of the spread of COVID-19.

“In that regard, I further direct the Ministry of Health, the county governments and the Public Service Commission to expedite the recruitment process,” he said.

In addition, state and public officers with pre-existing medical conditions and or aged 58 years and above and are serving in Job Group S and below or their equivalents have been ordered to take leave or work from home with immediate effect.

The order, however, excludes officers in the security sector and those offering essential services.

Uhuru emphasized that more people, whether Kenyans or foreigners, remain under close monitoring under either self-quarantine or compulsory-quarantine.

The government has released the list of hotels and government facilities in which all those arriving at JKIA will be held for mandatory quarantine after it emerged there were individuals defying the ministry directive to self-quarantine.

The President said the move was arrived at to ensure the safety of all the people.

“I wish to assure you all that as government, at both the national and county levels, we are implementing strict evaluation and monitoring protocols, designed to proactively seek out and test persons who may be carriers of this virus.”

The President noted that the government will continuously enhance the testing and quarantine capacity daily with support of development partners and international organisations.

On Tuesday, Chinese billionaire Jack Ma donated 20,000 testing kits and other equipment to the government to help combat the spread of the virus in the country.

Uhuru announced the Cabinet, which meets weekly, chaired by Interior CS Fred Matiang’i, will now be required to hold their meetings twice per week in an effort to give priority to the COVID-19 pandemic.

The President appreciated the work health workers were doing as frontline responders to the pandemic and urged Kenyans to support their selfless effort by reducing movement or congregating in large groups.

He ordered that with immediate effect, the management of the Kenya Ferry Services be vested in the National Police Service, the Coast Guard and the National Government Administration Officers.

All the citizens will be required to follow the rules while crossing the ferry.

“Social distancing is now our new norm. It is our new way of life. We reiterate that the most effective way to limit the spread of the virus is through basic changes in individual behaviour and hygiene,” he said.

He said that it was unfortunate that recent transmission of the virus in the country was from the political and religious leaders who had failed to heed the guidance by the Ministry of Health on self-quarantine and social distancing.

He called on all Kenyans to observe simple hygiene rules such washing of hands frequently with soap and water for at least 20 seconds, or use sanitisers, covering their nose and mouth when coughing and sneezing with tissue or flexed elbow and avoiding close contact with anyone with cold or flu-like symptoms.

“These measures will slow the spread and ease the effects of COVID-19 on our nation, and allow our health care system and our first responders to most effectively deal with the pandemic.”