Kagwe self quarantine is the only way to deal with the coronavirus.

• The Health CS said that 437,922 travellers have been screened since January 20 and 1,100 workers have been trained to handle coronavirus. 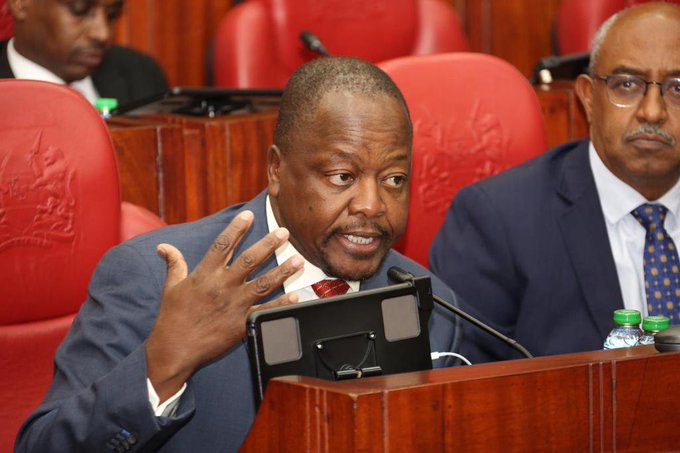 Health Cabinet Secretary Mutahi Kagwe when he appeared before the Senate Departmental Committee on Health to shade light on preparation to handle coronavirus.
Image: COURTESY

The National Treasury has released Sh300 million to help in national emergency preparations for the coronavirus across the country.

The CS said 437,922 travellers have been screened since January 20 and 1,100 workers have been trained to handle coronavirus.

Kagwe added that the 120-bed facility in Mbagathi Hospital is ready and that the country has sufficient personal and enough protective devices.

The CS said added that there are two designated rooms for temporary isolation at JKIA waiting transfer.

"The CS was addressing a joint Departmental Committee on Health on Wednesday giving the updates on the preparations.

He defended the government's decision to allow 239 Chinese passengers into the country and have them under self-quarantine.

"Self-quarantine will be the only way we are going to deal with this disease," Kagwe said.

Kagwe said that none of the 13 Chinese Nationals arrived in the country on February 22 and 28 originates from Wuhan City.

Team to coordinate preparedness, prevention and response to corona threat.
News
2 years ago

The suspension takes effect from March 3, 2020.
News
2 years ago

Kenya's healthcare system 'not all that bad' – Kagwe