Magarini salt harvesters do not use toilets 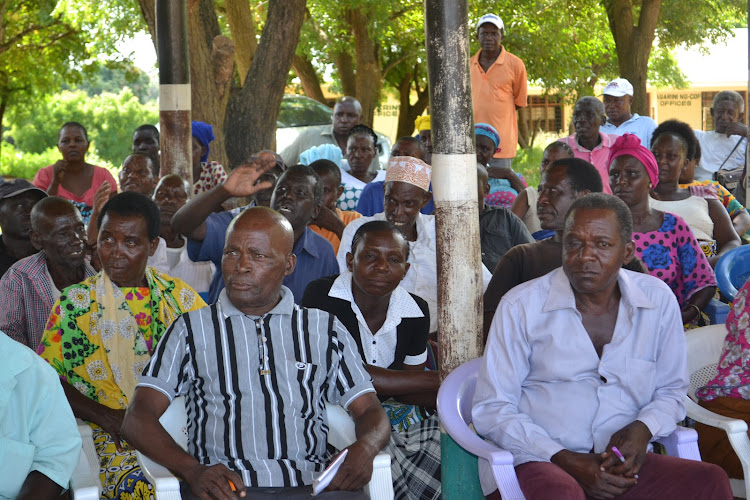 A health crisis is looming in the Magarini salt belt following reports that harvesters do not use toilets but relieve themselves along the dikes.

The available toilets are a kilometre away and salt harvesters say they often do not waste time walking for that long as they are in a hurry to complete their work.

They made the revelations during the launch of the Malindi public inquiry audit report of 2006 done by Kenya National Commission on Human Rights on salt harvesting in Magarini, Kilifi county.

Since Monday the commission has been going around reading the audit report to the public in the salt belt and to hear views or any queries.

Stephen Hinzano, a salt harvester, said they were suffering because they must walk a long distance to get to a toilet.

"At the dikes, there are no toilets. They are one kilometre away. Those workers have challenges which at times make it difficult to go to the toilet," he said.

Hinzano said the work targets set by companies are big and harvesters have to work extra hard to their day's work.

He said a piece of work measures two by 15 meters, which produces up to five tons of salt. They are paid Sh300, which was too little.

He said some of the harvesters are unable to finish the piece of work which is underpaid. Hinzano said companies had began using machines to harvest salt which exposes the salt to oil and could be a threat to health.

During a meeting at Gongoni chief's office, residents said those joining trade unions were sacked.

Aska Bwari said the working environment was very poor in the salt firms and wondered why government institutions like Nema did not intervene.

Bwari, a former cleaner, was sacked last November for joining a trade union and revealed there were many others who were axed for that reason.

"Something must be done to help the community. Workers have no right to join the union and whoever joins is sacked on the spot," she said.

They said a dam constructed by one firm dried up and the water sources they relied on had turned salty.

Cynthia Wainaina, the compliance officer at Krystaline salt firm, said there was hatred from the community.

She said reports that workers did not use toilets were serious and could cost the company its license. She promised to contact the relevant authorities to address the problem.

"The situation is not as bad as it was before. Currently, there is a liaison office and a CSR committee," Wainaina said.

Dickson Charo, a Nyumba Kumi elder, wondered why some companies were doing a lot including distributing free water to communities and  set up many projects but others did very little.

At one time during the meeting, there was a heated debate after some officials claimed there was no law compelling companies to do CSR.