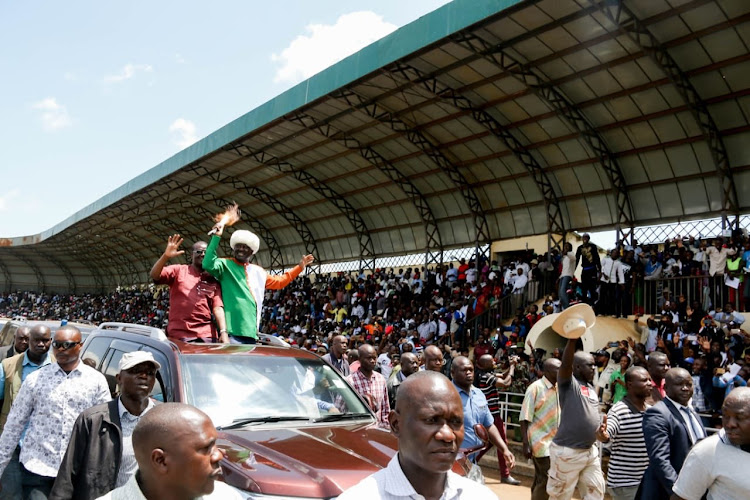 A vicious war has erupted in President Uhuru Kenyatta's Mt Kenya backyard with leaders jostling to exploit the BBI wave to position themselves in the 2022 succession race.

It has become clear that Mt Kenya politicians are trying to outshine each other, threatening the region's unity.

The Star has established that the Building Bridges Initiative has offered a new platform for a political showdown among those seeking to succeed Uhuru.

The President is set to retire in 2022 after serving two five-year constitutional terms having been first elected in 2013.

There are fears of a possible power vacuum in his Mt Kenya backyard without a clear successor.

“There could be people positioning themselves now that we are approaching an imminent transition period. They want to position themselves to inherit the reins of power,” Kieni MP Kanini Kega, a key ally of the President, told the Star.

The President has previously told his Mt Kenya people that he will not mind any political seat after 2022, including being a Prime Minister, should a referendum approve BBI's proposal for a change of the country's governance structure.

But his critics from the region, led by former Agriculture CS Mwangi Kiunjuri, want the President to exit the political stage when his term ends.

The anatomy of the succession tussle tips off a supremacy fight pitting the current crop of governors against their predecessors, as well as serving MPs and ex-lawmakers still holding sway in the region.

Other leaders include governors Muthomi Njuki of Tharaka Nithi , Francis Kimemia  of Nyandarua and Kega.

There is a feeling among some politicians from the Mt Kenya region that some leaders could be using the BBI process to market themselves as Uhuru's potential successors.

The MP, however, warned the region's leaders not to allow the succession competition to compromise the region's unity.

“The President is currently our de facto leader. We will continue to read his lips so that when the hour of reckoning comes, we shall follow him,” he said. He warned that over-ambitious leaders would be crushed by voters.

Politics is about power and those who do not have ambitions are in the wrong profession, Kega added.

Saturday's BBI rally in Kinoru, Meru county, exposed the bitter fights rocking the President's home turf after a section of BBI proponents blocked their rivals from addressing the rally.

He claimed that the process is no longer about building bridges but “building competition.”

Kabogo who took a swipe at some governors positioning themselves to succeed Uhuru said some county chiefs were so unpopular on the ground, yet they pretended to hold a grip on their people.

“It’s now competition of who will become the Mt Kenya leader after President Uhuru Kenyatta,” Kabogo fired after he was denied an opportunity to speak in Meru.

“No one will force a leader on us, take that to the bank. Vitu kwa ground ni different (Things are different on the ground).

Kenneth, the ex-Gatanga MP who has been missing from the political arena after losing in the Nairobi governor's race in 2017, has emerged.

The former lawmaker spoke in Kinoru and told the region to plan well ahead of the 2022 succession race.

The line-up in Kinoru, analysts claimed, was crafted to showcase possible Uhuru successors in Mt Kenya, a move that angered a section of politicians.

Yesterday, Waiguru said it was impossible to divorce the BBI process from the 2022 succession politics, especially when one of the proposals was to alter the structure of government.

"It is true that succession competition can divide the region. However, let us not interpret the divergence of views as division of the region. In a democracy, you expect and tolerate differing views,” she told the Star.

The governor, a key player in the Uhuru succession race, said BBI is a political process with differing opinions among politicians likely to be construed to mean leaders positioning themselves.

“It is also a process that reveals the abilities of different leaders and gives the people an opportunity to assess them,” Waiguru said.

She said as long as Uhuru remains the spokesperson and kingpin of Mt Kenya, the 'region will be united in the end.'

He accused ODM leader Raila Odinga of leading a scheme to plant leaders for the people of the Mt Kenya region.

“Raila will not impose people on us as leaders. We were elected by the people, and we will continue working with them,” Kuria said in a swipe at Raila's plan to work with a section of Mt Kenya politicians.