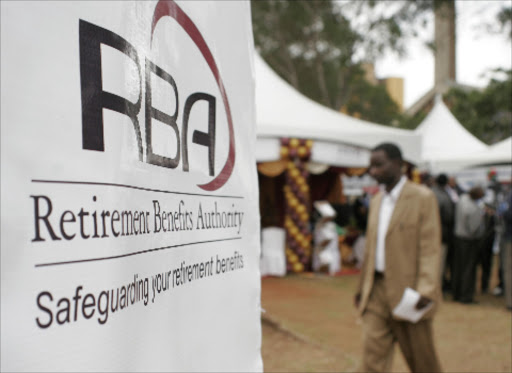 A man reads a banner at a past Retirement Benefits Authority annual open day./FILE

Pensions regulator RBA has embarked on a fresh bid to block employees retiring early from accessing half of their employer’s pension contribution.

The Retirement Benefits Authority wants the law allowing employers to keep pensioner’s contributions until they are 55-years-old to be implemented.

Treasury, in the June 2019 notice by former CS Henry Rotich, sought to remove clauses that allowed members to access 50 per cent of employers’ contribution and the investment income.

The proposal ‘technically’ blocks those who lose their jobs before they’re 55 years-old from getting their pension.

RBA has, therefore, organised forums to unbundle the regulations as well as another which seeks to compel public servants to contribute their own pension starting May.

The meetings will start today in Nairobi at the Sarova Panafric before the team heads to Mombasa, Kisii and Machakos on Thursday.

Nyeri, Nakuru, and Kakamega forums have been planned for March 2 while Meru, Kisumu, and Eldoret will be slated for March 4.

The forums follow in the wake of Parliament’s annulment of the regulations in Legal Notice 88 citing “lack of demonstrable public participation”.

The Committee on Delegated Legislation chaired by Uasin Gishu MP Gladys Shollei concluded it would impose significant costs on persons who may opt to retire early.

“The regulation makes rights, liberties or obligations unduly dependent upon non-reviewable decisions, insufficiently defined administrative powers. Most decisions would be by fund managers,” the MPs warned.

Observers have viewed the proposal as one that will benefit pension firms which would have billions of shillings in member contributions locked into their schemes.

It is these issues that the RBA intends to unbundle for pensioners during the town hall forums.

In the BPS, the Treasury seeks to roll out the law making it mandatory for more than 70,000 civil servants to contribute to the Public Service Pension Scheme (PSPS).

Therefore, starting May, every member shall contribute to the PSPS at the rate of 7.5 percent – monies deducted from monthly pensionable salary.

The government, for its part, will make a contribution for each member at the rate of at least 15 percent of the member’s monthly pensionable salary.

“A member may also make voluntary addition to their contributions towards their retirement benefits in the scheme,” the BPS 2020 reads.

The scheme is currently governed by the Pensions Act Cap 189 and operates on a non-contributory basis.

The benefits from the non-contributory scheme are budgeted for and drawn directly from the Consolidated Fund Services.

This is argued to have increased wage bill in the government with latest actuarial studies showing that the liability has increased to Sh990 billion.

“This has magnified the need for a more sustainable scheme for public servants,” the BPS reads.

For a decade, civil servants have opposed the arrangement which would see a reduction in their take-home pay.

The Treasury says it is going that direction following the pressure on public spending amid the constant threat of unmet revenue targets.

In 2008, the government paid out Sh25 billion, amounts which have kept increasing every.

About Sh89 billion was budgeted in 2018-19 whereas Sh109 billion was factored in the current year. By 2022, the government’s bill would have risen to Sh153 billion.