The new baby, 3 days old, was spotted grazing with its mother

• Southern rhino population has been rising over the years and stands at roughly 18,000 today 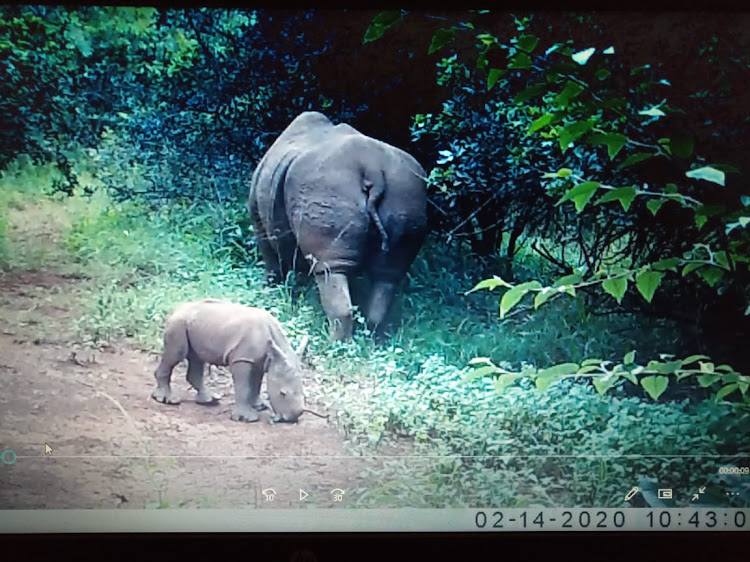 The new baby, 3 days old, was spotted grazing with its mother.
Image: COURTESY

The baby rhino, suspected to be three days old, was spotted grazing with its mother on Saturday.

KWS broke the good news on twitter saying 'new kid on the block'.

"We are thrilled to report the birth of a white rhino in Nairobi National Park.The lucky mother rhino had gone into hiding from hawk-eyed rangers only for her to resurface today with a three-day-old calf. Welcome to the family baby rhino," KWS said.

KWS officers are yet to determine the sex of the baby rhino, saying that capturing to examine it would be unnecessarily intrusive and stressful to both mother and newborn.

Unlike its critically endangered and nearly extinct northern rhino subspecies, the southern rhino population is increasing.

Southern white rhino population has grown from fewer than 50 individuals in the early 1900s to roughly 18,000 today.

Northern White Rhino was thought to be doomed forever when Sudan, the planet's last male, died at the Ol Pejeta Conservancy in March 2018.

He was survived only by Najin, 30 and her daughter Fatu, who live under 24 hour armed guard in the same conservancy but are both unable to become pregnant.

Sudan was one of only eight northern white rhinos left alive on the planet after poaching greatly reduced their numbers.

The international consortium of scientists in an attempt to preserve the species harvested and froze sperms from four deceased males and took 10 eggs from females to continue the lineage of the northern white rhino.

The embryos would be implanted in the wombs of southern white rhinos, a closely related subspecies still found in large numbers in South Africa, Zimbabwe and Botswana.

Even though they were excited about the discovery, Kenyans expressed the safety concern for the new baby.

“Hopefully, the baby rhino will not die in your hands,” said Paul Emile on Twitter.

They also suggested names for the baby including Moi, Valentine, Musale, Kimueriet, Zuru among others.

The egg harvesting was done at the Ol Pejeta conservancy.
News
2 years ago
Post a comment
WATCH: The latest videos from the Star
by Akello Odenyo Court Reporter
News
15 February 2020 - 18:10
Read The E-Paper