• MoU between church and county expired in 2015 and was not renewed.

• School says the church is occupying its land illegally, a claim strongly denied by the church.

by LEWIS NYAUNDI and VICTOR IMBOTO
News
14 February 2020 - 05:00
CITY PRIMARY: Side view of the Prayers Beyond Boundaries Ministries church as seen from the fence.
Image: VICTOR IMBOTO

Once an exclusive Asian institution and one of the oldest schools in the country, City Primary School today is dreary and run down. And it risks losing part of its vast land.

The school says the church is occupying its land illegally, a claim strongly being denied by the church.

Documents in possession of the Star reveal that in October 2013, the church — Prayers Beyond Boundaries Ministries  — headed by Lucy Wa Ngunjiri wrote to Nairobi Governor Evans Kidero, requesting to use part of City Primary for Sunday Services.

Controlled by the county government at the time, City Primary invited the PBB Ministries in November of the same year after approval of a two-year MoU to use its playground. The MoU was to expire in the same month in 2015.

The MoU was between the county and the church. The MoU and other documents allow the church on the premises as long as it does not disturb the classes. It is not limited to Sundays. 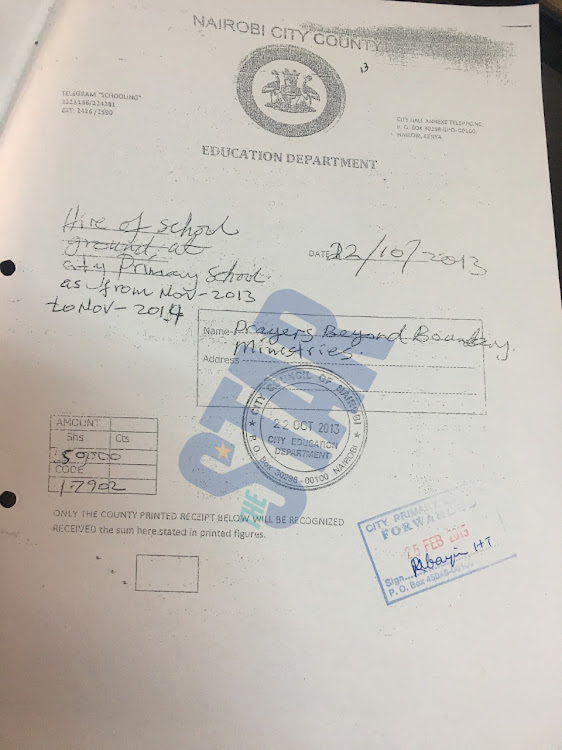 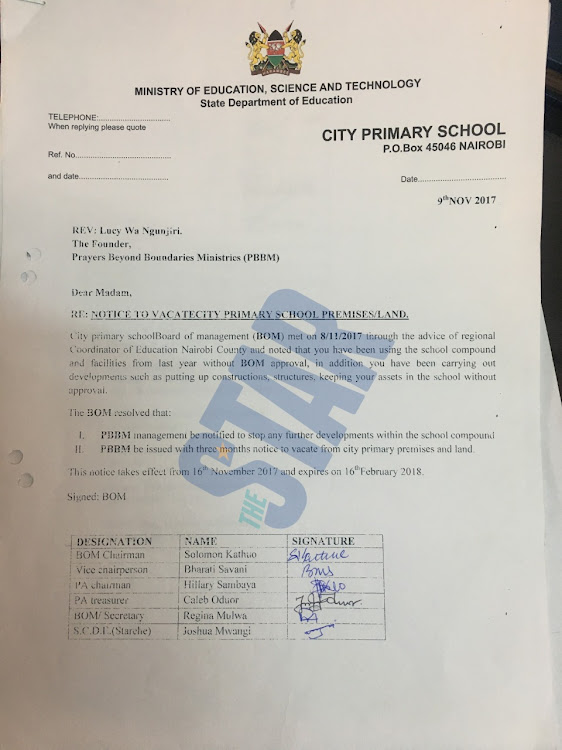 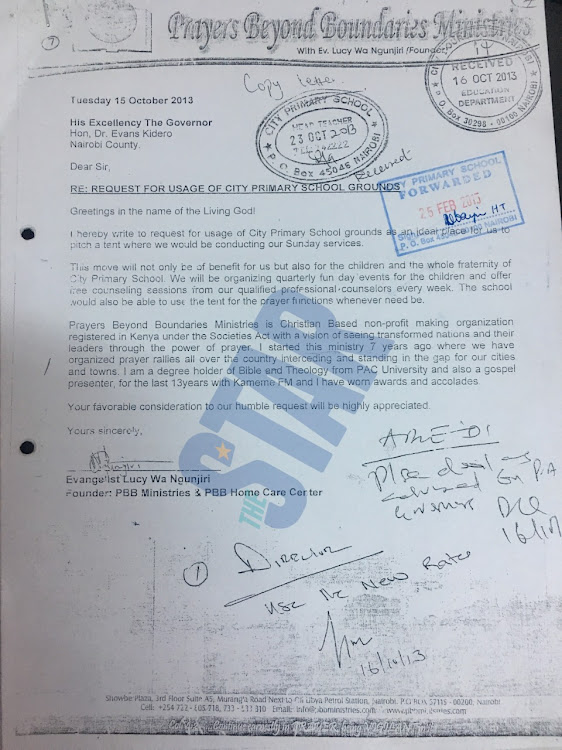 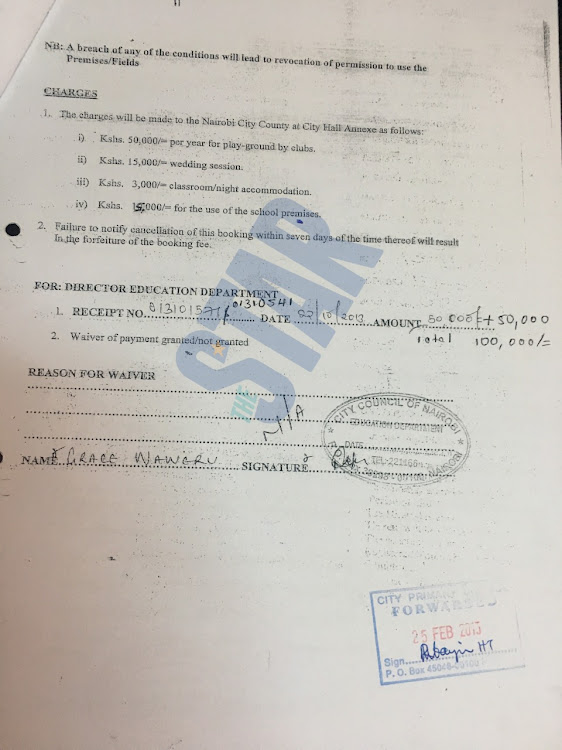 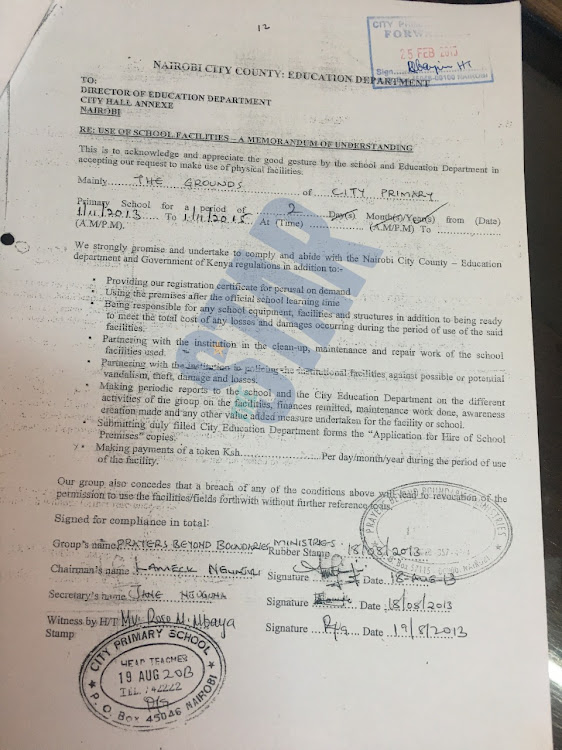 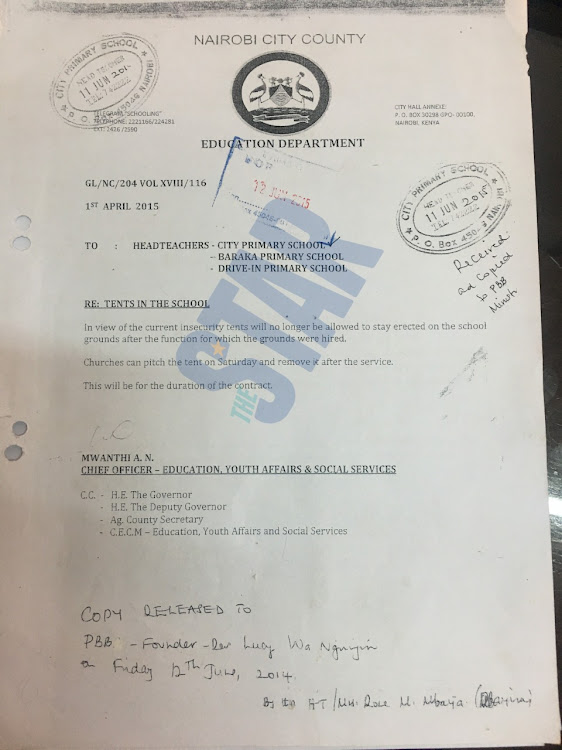 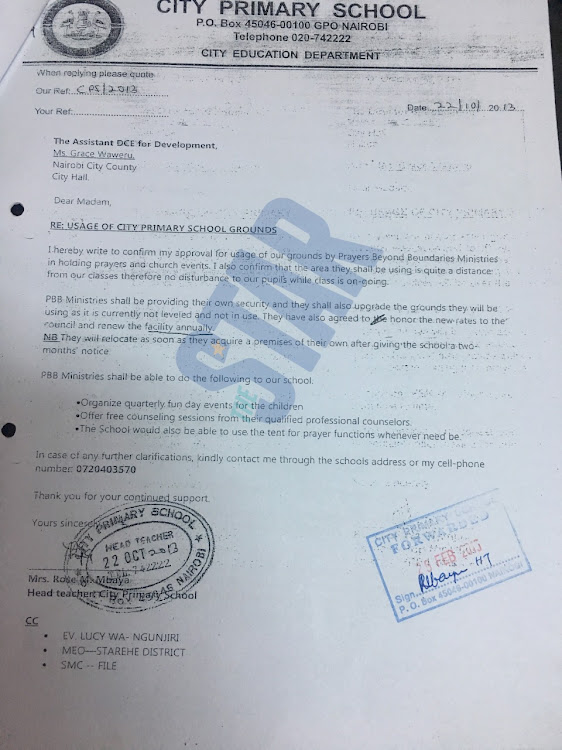 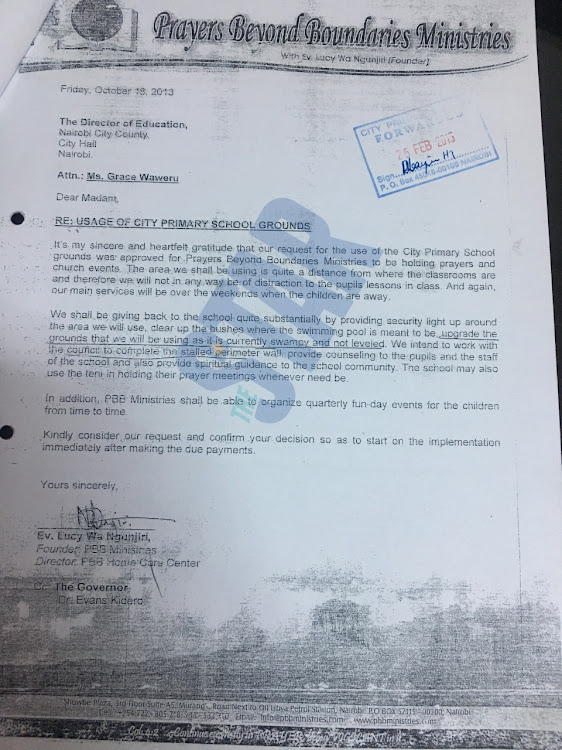 Four years on, PBB continues to occupy the land. The school insists the church has refused to leave the school compound and disobeyed previous agreements reached when the MoU was active.

The county Education department did not respond to calls but the County Executive Committee chair for education said she would call back. By press time, she had not done so.

The school fraternity now fears they could lose part of the school land that is yet to be titled, even in it celebrates its 80th birthday on Friday.

The church owner Lucy Wa Ngunjiri, who is also a media personality, declined a face-to-face interview with the Star to explain the matter.

The church owner in a brief phone conversation on Thursday, she distanced herself from the claim that the church has been reluctant to leave the school premises.

She asked anyone who is disgruntled to go take down the big tent the church has been using.

"Don't look for the preacher when you want to taint her name... anyone who wants to pull down the church should have done it yesterday," she told the Star.

In her request letter to use part of the school, dated October 2013, Lucy introduces her ministry as a non-profit organisation and herself as the founder of the 12-year-old Prayers Beyond Boundaries Ministries.

The document also indicates that she is an alumna of PAC University where she pursued a Bible and Theology degree. She said she is also a gospel singer and a radio presenter.

In return, she pledged to organise quarterly events for children, provide free weekly professional counselling sessions, provide security through lighting part of the school and help the school itself.

The MoU, in possession of the Star — to have the school playground used was reached between the PBB and the county government of Nairobi.

The PBB was represented by its church patron who is also Lucy’s husband, Lameck Ngunjiri.

City Primary's headteacher Rose Mbaya (retired) was the witness while the director of the Education department, Grace Waweru, acted on behalf of  Nairobi county.

The initial amount for using the grounds, Sh50,000, was paid on the same day the MoU was signed and a receipt issued; a copy is in the Star's possession.

However, this was just on paper. In the seven years the church has occupied the school, there has been blatant violation of virtually every accord reached in the MoU.

During that period, the church has expanded operations on the school grounds, first to expand its base to include the clergy parking lot and servants' quarters for two of Lucy's staff who live in the school compound.

The church is at the narrow end of the playing ground between the soccer pitch and the school’s swimming pool.

Its 10 white tents span about 50 metres in length by 20 metres in height, making 10 conspicuous canopies.

Its footing is a concrete slab that has a single round layer of stone above the slab, presumably for reinforcement.

Inside are plastic seats in neatly arranged rows.

Today, the PBB Ministries remains on the school playground but pays no funds for using the premises.

Testimony by staff who sought anonymity for fear of victimisation told the Star the church at times conducts its functions during school operating hours, violating terms of the expired agreement.

In one case, a   letter to the school and copied to Lucy, the county Education department asked churches using school grounds to bring down their tents soon after the services but this was ignored.

"In view of the current insecurity situation, tents will no longer be allowed to stay erected on the school grounds after the function for which the ground was hired," the 2015 letter reads.

It was signed by A. N. Mwanthi, the chief officer Education Youth Affairs and Social services. It was copied to the governor, his deputy and the county secretary.

In July 2019, the school was caught by surprise when one of its security officers was handcuffed, arrested and held briefly at Starehe Divisional police station after an attempt to shut down the church from holding a funeral service in the school compound in the middle of the day.

So too, at the expense of the church, the school swimming pool at the rear of the church is stagnating with rainwater and weeds are growing around it.

After expiry of the MoU in 2015, efforts to have the church vacate the school playground have been futile despite its presence on public land.

CHURCH AND SCHOOL: Partial view of the Beyond Boundaries Church at City Primary school. Adjacent to it is a not wel-maintained school swimming pool.
Image: VICTOR IMBOTO

A letter by the Education ministry and school’s board of management in November 2017 served the church with a three months’ notice to leave the school premises after raising concerns that they were using the grounds illegally.

The letter was drafted by the school's board of management chaired by Solomon Kathuo.

This would mean the church was to vacate by January of 2018, but this did not happen, nor was the letter officially responded to.

Lucy's tale is one from grass to grace, which started back in 2007 when she started her PBB Ministries.

In a previous interview with a digital platform, Eve Woman, published in September 2016, Lucy reveals her birth name is Lucy Mburu and narrates her steady rise from a househelp to a church evangelist.

Sent away by her father at age 15, Lucy says later in life they mended fences.

She credits her husband for pushing her to start a church.

Her following has over nearly one and a half decades attracted hundreds of people from all walks of life.

The church website reveals that the PBB Ministries was founded in August of 2007 and it has two other branches, in Ruiru and Mai Mahiu.

Positioning itself as a ministry that banks on prayers for transformative leadership, Lucy’s intercessory prowess gained renown and her popularity among the political class has grown as they seek her divine intervention.

So formidable is her intercessory charm, that she brushed shoulders with President Uhuru Kenyatta during the 2017 election campaign.

The brief interaction included reading a few Bible scriptures and prayers for the President who was seeking a second term.

Her fame among top city politicians and other VIPs is evident.

In the celebrations, Lucy described Kidero as “the gentleman God has used for her to preach in Nairobi” while Kidero heaped praises on the "woman of God".

In 2017, Lucy's name hit headlines after she was locked in a dispute with the ODM leader Raila Odinga over the use of Uhuru Park for a public function.

ODM party had sought to use the park for a political rally but PBB under Lucy claimed they had organised a prayer meeting for the country ahead of the 2017 General Election.

When the Star visited the School on January 17, it found the once prestigious institution dilapidated.

A plaque on the school's administration block shows that the school was opened on February 1940 by the then colonial governor and the Queen's Representative, Sir Henry Moore.

Its history reveals that the school had not admitted any African child due to racial segregation in the colonial era.

Today all that remains of the once striking all-white and tiled roof structure is a run-down structure for about 1,000 students.

Jared Obiero, the regional director of Education, Nairobi county, on Thursday said a letter had been drafted to the school board of management.

Under the Basic Education Act 2016, the school board of management is given power to act on behalf of the government in running of school affairs.

The school's headteacher, Susan Muthwii, says she lacks proper knowledge of the terms of the church's occupation of the school playground.

She took over the reins of the institution less than a month after the retirement of the previous head, Regina Mulwa.

Mulwa declined to comment on the matter, noting that she had handed over the responsibility and the issue was not in her jurisdiction.

Solomon Kathuo, the school board of management chairman, on Thursday confirmed a standoff between the school and the church but declined to comment further.

The alleged misappropriation of the school resources comes at a time Kenyan schools are struggling to stay afloat.

The Kenya Primary Schools Heads Association in 2019 called on Parliament to review the allocation of funds to the Free Primary Education program, noting the annual Sh1,420 per pupil is no way to meet school operations.