• The claim was made by an NTSA parody account on Facebook asking drivers to replace their old or defaced licences with the new digital smart ones. 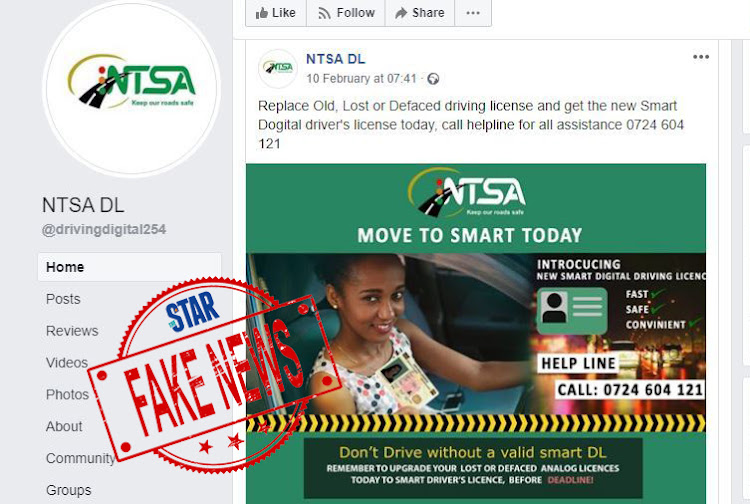 The National Transport and Safety Authority (NTSA) has dismissed a Facebook page claiming to replace their driving licenses with digital ones.

This comes after the message was posted on Facebook and widely circulated among online users.

The Star did a fact check on this claim.

The claim was made by an NTSA parody account on Facebook asking drivers to replace their old or defaced licences with the new digital smart ones.

The Star established that the account managed by one Kevin Khamisi, who uses phone number 0724 604121  and [email protected], has a following of over 11,000 people and looks exactly like that managed by NTSA.

The posts on the page are in a way that followers believe the alerts are from NTSA. 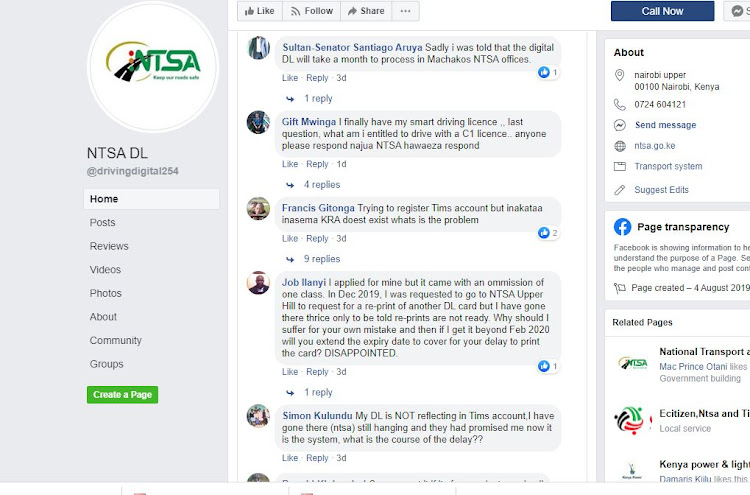 Efforts to get comments from him were futile as he did not answer calls.

NTSA in its response said it had not issued such an alert.

"The public is advised to be aware of individuals purporting to be issuing Smart Driving Licences through a Facebook page titled *NTSA DL*," read an alert by the authority.

"The authority does not manage such a page and has reported the matter to the relevant government agencies for action.

"As investigations are undertaken, we urge members of the public not to transact through that page and request anyone who has been conned through it or the mobile number 0724604121 to report to the nearest police station," the authority said.

This was one of the resolutions made in Mombasa during a high-profile security meeting led by Interior Cabinet Secretary Fred Matiang'i.

In a 10-point plan for his ministry, Matiang'i said he would concentrate on countering terrorism, police reforms, cleaning up the registry department, introducing instant fines for traffic offences, fight radicalisation in universities and continue cleaning up the transport sector.

Uber, Bolt among taxi apps ordered to get licences or get off road

The licences will be valid for three years.
News
3 years ago

This saw NTSA ask motorists who had already applied for the smart driver’s licence to go and collect them at the NTSA offices in Nairobi.

The smart card costs Sh3,050 and is valid for three years.

It has an electronic chip containing the name, blood group and other biometric data of the driver.

But Khamisi on January 27 duped his followers by posting, "To all concerned drivers still holding the old booklet driver's licence or lost licence, be sure to upgrade your driver's licence to the new digital smart DL before the deadline, call for assistance 0724604121".

The grammar of the message however raised concerns from some followers provoking them to seek clarification.

The Facebook page is a hoax and is suspected to be used to con unsuspecting Kenyans seeking to replace their licences.

According to NTSA, all applications for the new licenses are done through the Transport Information Management System Portal well known as the -TIMS

How do you get a digital licence?

To apply for the new licenses you need to do the following: