Makindu quadruplets discharged, one to be flown to Nairobi over heart problems

• Medics at Makindu sub-county hospital have discharged three of the quadruplets delivered at the facility.

• The fourth will be referred to Kenyatta or The Matter Hospitals for specialized treatment after she developed heart problems. 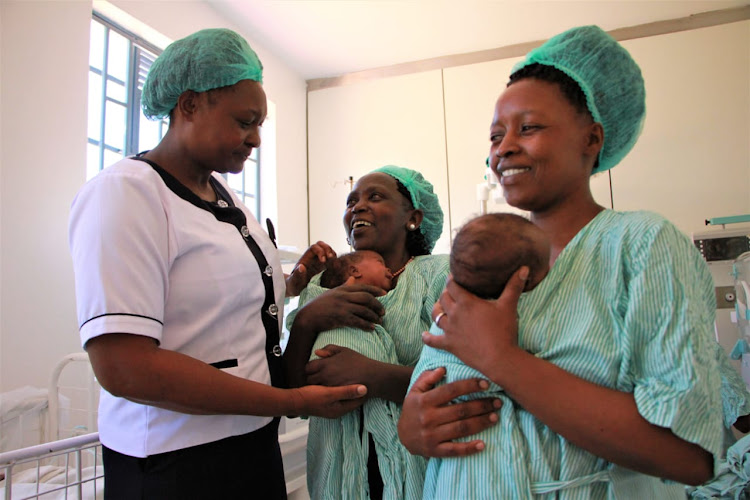 Hilda Mumo, the mother to the quadruplets being show how to warm the infants by Damaris Nthenya, the nurse in charge of the New Borns ward at Makindu sub-county hospital on Monday 10th Feb 20202.
Image: MUTUA KAMETI

Three of the four quadruplets delivered at Makindu sub-county hospital in Makueni County last month have been discharged.

The fourth one is set to be transferred to either Kenyatta National Hospital or The Mater medical facility in Nairobi for specialized treatment after she developed a congenital heart problem.

In the first of its kind delivery in the facility, Hilda Mumo, 32-year old from Kiou village in Mukaa sub-county got three girls and a boy.

The facility's Paediatrician Dr. Kimani Ngaruiya said the three are healthy and each had attained the required weight of 1800 grammes each.

“The four are healthy but we are discharging three of them. The fourth will be referred to either Kenyatta National Hospital or the Mater in Nairobi for specialized treatment since she has developed breathing problems,” he said.

According to the medic, the infant is oxygen dependent because she has a constricted pulmonary artery.

He said the vessel that allows blood to go to the lungs before delivery had refused to close as expected.

“It is a heart problem that will be managed in either of the facilities through a surgical procedure,” Ngaruiya told the Star in an interview.

The mother and her husband Kimeu Musembi appealed for assistance from well-wishers in bringing up the infants saying they were financially challenged.

They had mixed feelings after discharge.

“I am happy that the infants have been discharged but am also disturbed by the referral case of the fourth, I hope God will take charged and she recovers,” said Musembi.

Musembi, a junior clerk at the ministry of youth affairs in Makindu appealed for financial assistance in the treatment of the ailing infant and bringing up the other three.

He said they will not be getting more children in the future.

Their bill was footed by the National Hospital Fund and the County Government of Makueni.

A woman who delivered quadruplets last November in Bwemaa village, Bumula constituency, has been admitted to hospital with the children due to ...
Counties
6 years ago

As Kenyans celebrated Mashujaa Day on Sunday, a woman from Kisii county was celebrating the birth of her her four babies.Jackline Kwamboka, 18, from ...
Counties
7 years ago

A 28-year-old woman has given birth to quadruplets at Kapenguria County Hospital in West Pokot.Peninah Chenangat, mother of two, hails from Karita ...
News
2 years ago
by MUTUA KAMETI Correspondent, Makueni
News
10 February 2020 - 20:48