WHAT ABOUT THE VICTIMS?

Moi should have been held to account for tyranny, lobby says

His legacy includes inflicting pain and death on his opponents

•After a long life maintained by money he stole from the victims of his violence, and later by their taxes, Moi has exited on his own terms 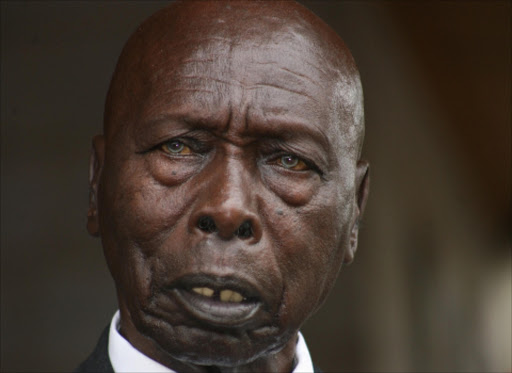 Letting former president Daniel are Moi go scot free without calling him to for his administration's record was a mistake, a human rights lobby has said.

Moi's 24-year rule ended in December 2002 after his preferred successor Uhuru Kenyatta was thrashed in the general election by opposition candidate Mwai Kibaki.

He will be buried on Wednesday at his Kabarak home, Nakuru county, complete with state and military honors.

Kegoro said it was disgraceful that while Moi lived for 18 years after he relinquished power, successive governments revered him, not calling him to answer questions around his record in office as a way of providing closure to the victims of his tyranny.

KHRC said while Moi started out on the right footing after he took the reigns of power in 1978 - even releasing 26 political detainees imprisoned by former president Jomo Kenyatta, earning him short lived international appeal - he quickly embraced a strongman mindset, becoming ruthless in consolidating power.

The organization, whose founding the Moi regime fervently frustrated in the 1990s, said the dissidents Moi detained and tortured came out with debilitating disabilities while those who were killed or disappeared left gaping wounds in their families.

Others lost their jobs and suffered financial ruin yet others had their careers destroyed, like Kenneth Matiba "who could have become president of Kenya in his own right," KHRC said.

Detention without trial was often a crushing, life-changing experience, Kegoro said. It was regrettable that after leaving power, Moi "never once revealed his thoughts about his own presidency, particularly in the light of the mounting criticism about his record in office."

Kegoro also faulted the country's truth and reconciliation process for not giving "the victims of the Moi violence a chance to find closure through some kind of public confrontation with Moi.

"The effect is that after a long life, maintained by money that he stole from the victims of his violence, and later by their taxes, Moi has exited on his own terms and without really being made to answer for anything that happened under his watch," Keogro said.

"The victims of Moi and the Kanu regime have never been given justice. These include those who were assassinated, murdered, tortured, detained without trial, exiled, and those whose lives were destroyed. Neither Moi nor his regime ever faced justice or paid for these crimes,"he said.

The lobby called for a credible truth commission to effectively provide closure to the victims of the misdeeds of the Moi administration.

"Those responsible, or their estates, must be called to account through lustration, compensation or stiff prison sentences. A society that forgives — and forgets — such abominations is bound to keep on committing them," Kegoro said.

Post a comment
WATCH: The latest videos from the Star
by GORDON OSEN News Journalist
News
09 February 2020 - 22:00
Read The E-Paper