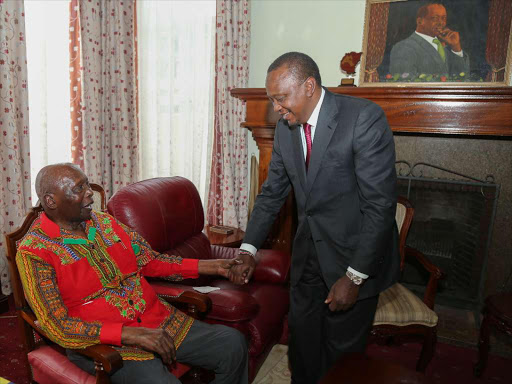 A number heads of state and government will attend the funeral service for former president Daniel arap Moi next Tuesday.

Last night, the Ministry of Foreign Affairs was busy confirming attendees after the full government funeral committee met at Harambee House for the first time.

The committee drew up a long list of tasks that needed to be done and assigned them to relevant team leaders. Head of Public Service Joseph Kinyua is the overall leader and he will brief both the President and his deputy on a daily basis.

The reason why the heads of state will attend the funeral service at Nyayo and not the burial in Nakuru is the logistics involved.

The committee decided that people who worked closely with Moi will be involved in the plans until the former president is buried next Wednesday.

By yesterday, at least 10 heads of state from the region and the continent had confirmed their attendance at Moi's funeral.

The former head of state who ruled Kenya with an iron fist will be laid to rest at his Kabarak home on February 12.

The Star has established that the number of presidents attending Moi's funeral could increase.

By yesterday, more heads of state and other dignitaries were expected to confirm their participation in the farewell ceremony of a man whose diplomatic manoeuvres were felt across the region.

Among those expected in Nairobi on Tuesday are Uganda's Yoweri Museveni, South Sudan's Salva Kiir and Rwanda's Paul Kagame.

Yesterday, the Foreign Affairs ministry was busy compiling the growing list of the high profile dignitaries who had confirmed their attendance through their missions in Nairobi.

Addressing a press conference, Kinyua said the list of all presidents and dignitaries would be made public in due course.

“The government continues to receive messages of condolences from foreign governments, and we are in the process of compiling the list of heads of state and government and other foreign dignitaries who have indicated to us that they shall attend the state memorial service, ” Kinyua said.

It emerged that President Uhuru Kenyatta, a political student of Moi, plans to roll out an elaborate burial ceremony for his political mentor.

The programme as unveiled by government would ensure a heroic send off to the longest-serving Vice President and President of Kenya.

On Tuesday, the President ordered a state funeral with full civilian and military ceremonial honours for Moi.

Apart from founding President Jomo Kenyatta, Moi is the only Kenyan to be accorded such honour in the history of the country.

The pronouncement makes Moi’s funeral only second to Kenyatta's and way above the four Kenyans who had been accorded a state funeral.

The only slight difference between Moi and Kenyatta’s funeral ceremonies will be the size of gun salute that will be performed on Wednesday.

Kenyatta having died in the office received a 21-gun salute while Moi will be accorded 19-gun salute being former Commander-In-Chief of the Kenya Defence Forces.

Tomorrow, President Kenyatta will lead the nation in viewing the body of Moi at Parliament buildings. The viewing will be done three days.

At  8.05am on Saturday the cortege draped in the national flag will leave Lee Funeral home in the company of Moi’s family.

The funeral procession will snake its way through Valley Road, Kenyatta Avenue through to Parliament Way where a military guard of honour will be mounted before the cortege is ushered to Parliament.

Moi’s body will lie in state in Parliament for three days..

“To allow our nation to reflect on President Moi’s momentous role and achievements, and to accord all Kenyans the opportunity to participate in public viewing and the paying of last respects to the former head of state and government, the body of President Daniel Toroitich Arap Moi shall lie in state in Parliament from Saturday, 8th February 2020 to Monday, 10th February 2020,” Kinyua announced.

On Tuesday, the gun carriage and funeral procession will make its way from Parliament buildings to the Nyayo stadium where a national interdenominational memorial service led by African Inland Church will be conducted.

Interior CS Fred Matiangi has gazette Tuesday as a public holiday to enable Kenyans to participate in the celebrations for Moi.

Head of states from different countries, local leaders led by President and family will eulogise Moi. A number of current and former world leaders are expected at the memorial service at the Nyayo national stadium.

Kenyans have a chance to sign condolence books at Harambee House, the Supreme Court buildings, Parliament, all regional commissioner's offices, all county commissioners' offices and in embassies abroad.

The government will mount huge screens in Nakuru, Sacho, Eldama Ravine and Karbenet to give the residents the opportunity to follow the memorial service and state funeral.

“The government encourages all Kenyans to participate in the state ceremonies, and to also take time to honour the memory and legacy of the late Mzee Moi by reflecting on ways in which each one of us can foster the wellness of our nation by creating a more peaceful, loving and united Kenya,” Kinyua said.

“We encourage each and every Kenyan to plant a tree in his memory or undertake an act of benevolence for the neediest members of our society.”

How Moi shaped careers of Uhuru, Ruto, Kalonzo and Mudavadi

Moi mentored, moulded many politicians including the big guns.
News
2 years ago

Uhuru issued a presidential proclamation announcing the passing on of Moi.
News
2 years ago

Njiru added that Moi took care of him and protected him.
News
2 years ago
by LUKE AWICH Political Reporter
News
07 February 2020 - 05:00