Uhuru issued a presidential proclamation announcing the passing on of Moi.

• The former president died at the age of 95.

• Last month, doctors at the Nairobi Hospital were forced to put Moi back on life support machines. 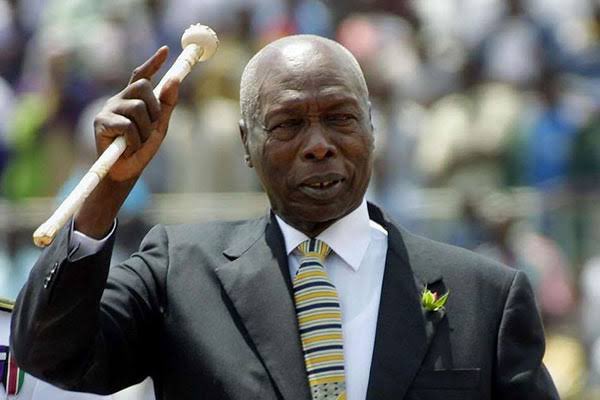 President Uhuru Kenyatta issued a presidential proclamation on Tuesday announcing the passing on of the retired President.

The former president died at the age of 95.

President Uhuru Kenyatta on Tuesday announced a period of national mourning on behalf of the passing of Moi.

In a presidential proclamation issued on Tuesday, said the period of national mourning will be observed from today until the day of Moi's funeral.

The Head of State has ordered the flag of Kenya to be flown half-mast as an expression of sorrow.

Last month, doctors at the Nairobi Hospital were forced to put Moi back on life support machines.

His health situation has not been stable since he was rushed to the facility in October last year.

At the time, his spokesman Lee Njiru had said the visit was for a normal check-up but since then he has been re-admitted four times.

Moi’s medical team led by his personal doctor David Silverstein are said to be managing recurring complications that have kept him at the hospital for almost three months.

During Moi's initial admission to the hospital, he was treated for pleural effusion, a medical condition where excess fluids accumulate around the lung areas.

Moi’s health condition is compounded by a knee pain he has been nursing following an accident involving his car in 2006 in Limuru.

Our nation was immensely blessed by the dedication and service of the Late Mzee Moi.
News
2 years ago

Moi’s life is one of the most improbable political success stories of our time.
News
2 years ago

Njiru added that Moi took care of him and protected him.
News
2 years ago
by DENNIS TARUS Digital Sub-Editor
News
04 February 2020 - 06:49