Raila, Uhuru to Atwoli: How State officials met their spouses

Politicians, govt.officials have publicly praised their wives and narrated how it all started.

• Raila said they then invited her to another party but asked her to come with her sisters.

• Uhuru in his part also narrated how he met his wife Margaret while out swimming. 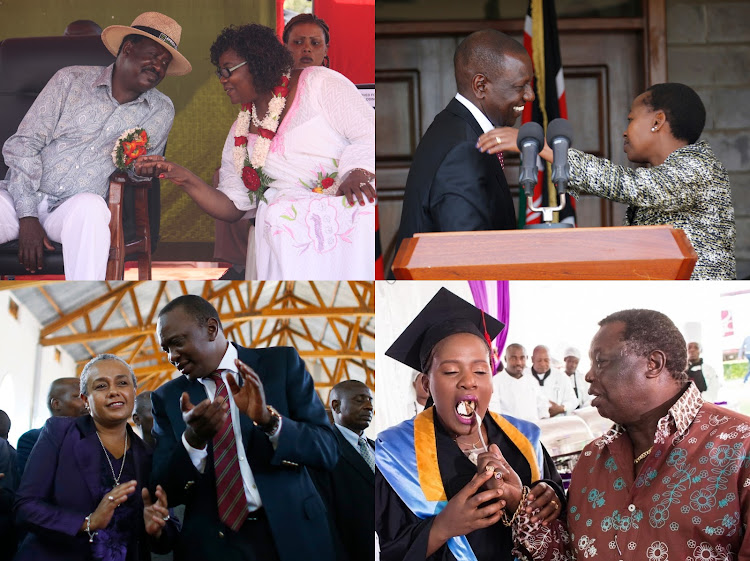 Getting a woman to settle down with is so far the most difficult thing any man can achieve.

Not only getting a wife but also a good wife for that matter.

In Kenya, we had politicians and government officials who have publicly praised their wives and narrated how they 'hooked them' to be their 'one and only'.

Here are some of them.

The ODM party leader said he met his wife Ida through a cousin.

"Ida has a cousin who is married to my cousin... so it is through that cousin of mine that I got to meet Ida... I was teaching at the University of Nairobi and Ida was also at the university," he said.

In an interview with KTN, Raila said Ida had a brother living in Pangani estate. 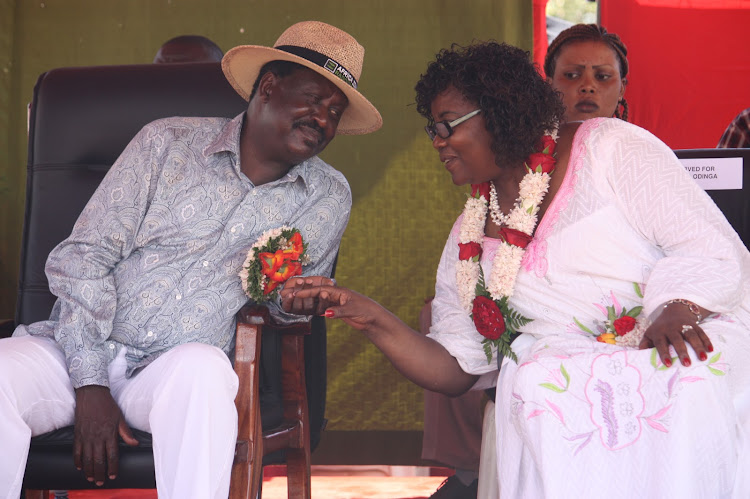 ODM leader Raila Odinga confers with his wife Ida Odinga in a past function in Mombasa.
Image: FILE

"So I went with my cousin to visit her brother and there she was with her elder sister .. they were having a family gathering..and that is where we met.. it was love at first sight.."

"There are people you will see and they will captivate you...she was one of them..she looked different from others....so I told my cousin that I want to see that lady again."

Raila said they then invited her to another party but asked her to come with her sisters.

"This was so that she could not think that I was the one inviting her... and that was the beginning of our relationship," he added.

In 2018, Ruto narrated how she got his better half in Kakamega.

"When I came to pay dowry, I went to Likuyani. Those looking for a reason as to why I hang around here often ... you now know why." 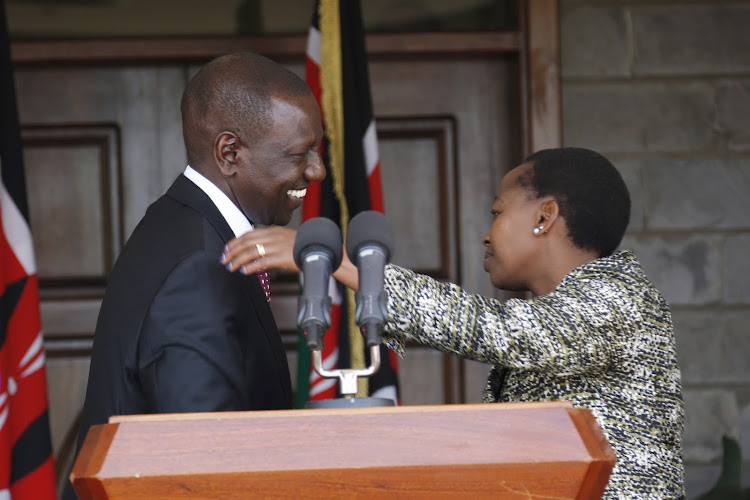 Deputy President William Ruto hugs his wife Rachel after addressing the press at his resident in Karen, Nairobi, on the termination of his case at the International Criminal Court, April 8, 2016.
Image: DPPS

The DP said when you find your better half in a certain county you "obviously have fond memories and feelings" about that place.

"You don't forget that place easily ... Like the Bible says, he who finds a wife finds a good thing ... aside from the fact that I am just a neighbour," he said.

After he was cleared of crimes against humanity by the ICC, he said he often did not find his wife in bed at midnight as she was out praying about the case.

At that time, the DP thanked Rachel for sneaking out to "pray fervently" for him, saying God was gracious to him and his family through the "torturous situation

I found Rachel in Kakamega, Ruto says on frequent visits

The former ICT PS narrated to Kenyans how he came from America and only had one week to travel back.

"My priority was to find a woman within that time and marry because the American culture seemed weird to me.

"I met a woman at the Kenyatta National Hospital Cafeteria, gave her a date that night and that is how I got my wife.

I was however warned that she consumes whole 750ml vodka by herself but I chose to stick by her."

Ndemo humorously shared the story of how he met his wife and how this led to a mind shift towards women, love and marriage.

Ndemo in a viral video on social media says while growing up as a teenager, they had devised various ways of getting a woman’s attention.

Uhuru in his part also narrated how he met his wife Margaret while out swimming.

"I first met Margaret when I was out swimming with my father...my father nudged me to befriend her [Margaret]. I have now known her for most of my life," Uhuru said.

A romantic Uhuru said Margaret is his friend, partner and a strong supporter of his ideologies. 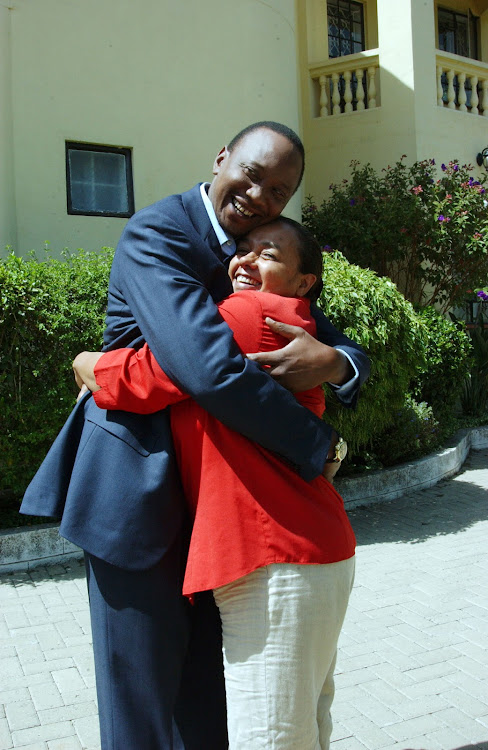 He continued, “Her brother was my friend in high school. Through him, I managed to meet his younger sister and we started off a relationship that has lasted from high school till now, and I’m thankful to God for that.”

He went on to advise: “Who you meet today as a friend and a partner may be your First Lady tomorrow. The girl I met in high school is the First Lady…(laughs).”

The former Attorney General who is celebrating his 100th birthday on Thursday was also not shy to tell his audience how she found her wife.

When asked why he married aged 52, Njonjoi said he couldn’t find a girl he could live with.

".. It took me a long time but eventually, I found one and I married her at the All Saints Cathedral..she was in the choir," he said.

Njonjo said she was not looking for a choir girl but noted that she just happened to be in the choir.

He notes that he never intended to marry an African girl, let alone a woman from Kabete where he was born in 1920.

Njonjo, a member of the Kenya Bachelor's Club, later married Margaret Bryson in 1972.

The Cotu secretary general Francis Atwoli spoke about his relationship with the KTN screen siren Mary Kilobi after their marriage came to light in October 2018.

"She is a nice lady, she is taking care of me, she is committed to our relationship and that’s all," Atwoli said in a live TV interview.

Kilobi added in the past interview, "He (Atwoli) said he does not want to be my boyfriend or anything that is not marriage. I reached a point I dated many people and I felt like he treated me so well, respects me and shows me, genuine love.”

He confirmed his marriage to Kilobi who is half his age. 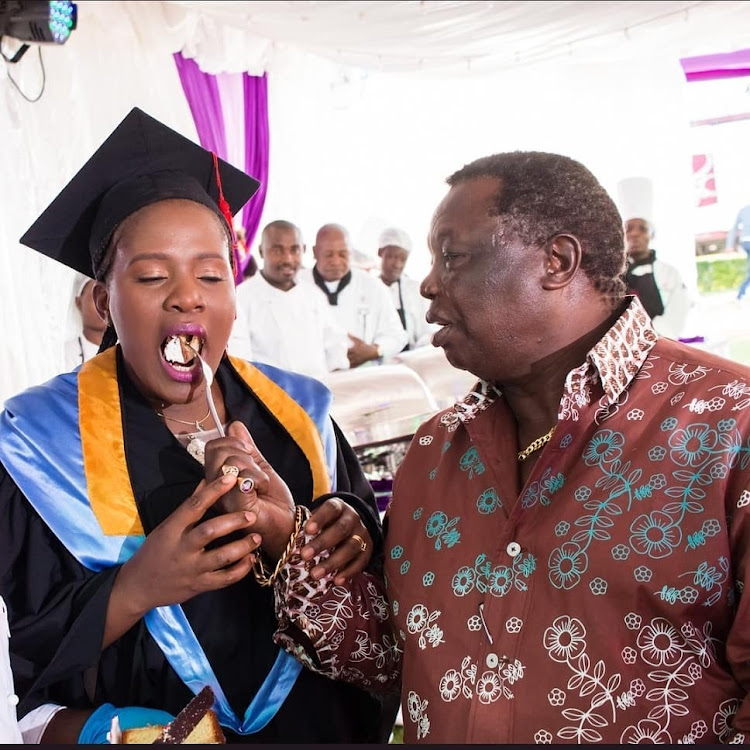 While explaining why he married Kilobi, Atwoli said his second wife chose to engage in politics despite his advice against this.

"The reason I asked her not to pursue politics was that I needed somebody to take care of me. Since she joined politics, I married Kilobi so that she attends to me," he said.

In 2018, the Nairobi woman rep who is also a mother of two revealed in an interview with KBC that she walked in on her husband having lunch with another woman at a city restaurant.

“I walked in, I greeted him and went back to my table.”

At home, she told her husband that she did not confront him because she cannot fight over a man.

“I told him: ‘Darling, what did you want me to do? You wanted me to fight with you in public? I had a business lunch there, you had another woman... was it something I needed to fight for? Because a man is not my God, my God is only one. I cannot fight over a man,” added Passaris.

Passaris disclosed that she recognizes other women in her husband’s life.

“When I travel with my husband, I buy presents for the other women’s children, because we are in this situation already. We are many. I know love is emotive.

“You know what? My first husband is God. I am not going to fight over this man to the point that I destroy other women or their children. I think every woman should be like that.

“Ashazaa huko nje, are you going to let the other women’s children suffer? I fight for all women; I fight for all children, okay? Even if it is my husband with another woman out there! At the end of the day, ni mtoto wa bwanangu, ni ndugu ya watoto wangu.”

The Suba North MP has also revealed how she fell in love with her Zimbabwean husband Magugu Mabona.

The two met online and would later meet for the first time as Magugu swept her away when she saw him carrying a bible.

“Sometimes you win strong people's hearts with the simplest of things. When I saw him, he was carrying a Bible. That, for me, is greater than anything.

“I know it is not the most romantic of things. However, he was good looking too and it is rare to see a good looking man carrying a Bible,” Millie said during an interview.

What does it take for a man to desire a woman?

Pastor Susan Munene who is famously known for her 'twa twa' advice tells the Star that a woman,'s attitude and aura will make a man choose her.

She lists five reasons a man will look at a woman and feel that she is the right person.

Love and Lust: What it takes to lure a woman into marriage
by NANCY AGUTU Senior Digital Reporter
News
23 January 2020 - 11:53