He was warned that she consumed a whole 750ml vodka by herself but chose to stick by her.

• I met a woman at the Kenyatta National Hospital Cafeteria, gave her a date that night and that is how I got my wife. 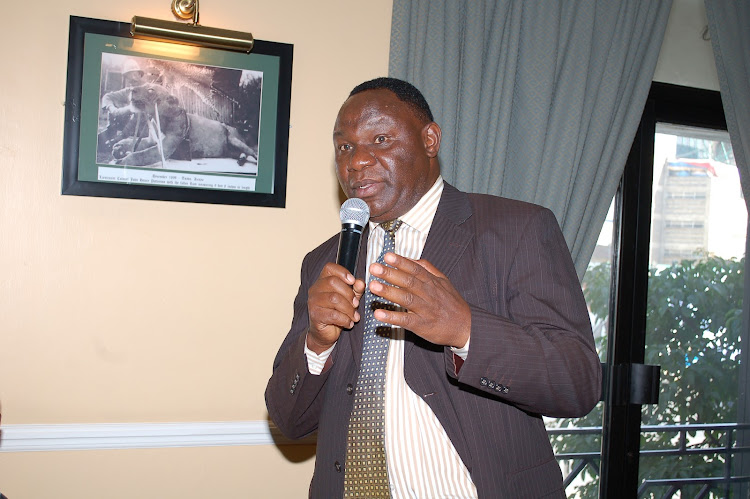 "I came from America and I had one week to travel back. My priority was to find a woman within that time and marry because the American culture seemed weird to me.

"I met a woman at the Kenyatta National Hospital Cafeteria, gave her a date that night and that is how I got my wife.

I was however warned that she consumes whole 750ml vodka by herself but I chose to stick by her."

These are the words of Former Permanent Secretary in the Ministry of Information and Communication Bitange Ndemo as he humorously shared the story of how he met his wife and how this led to a mind shift towards women, love and marriage.

Ndemo in a viral video on social media says while growing up as a teenager, they had devised various ways of getting a woman’s attention.

Ndemo was speaking to an audience at Engage, a speaking platform here in Kenya, that focuses on the power of engagement to foster learning and transform lives.

"So, one time in church, I had just moved to Nairobi when I was a teen. I decided to target a certain lady in the church. I went to a shop and bought Brut, the only cologne I knew of then," Ndemo divulged.

"I sprayed the whole can on myself and somehow squeezed myself among the congregants and sat next to her. I knew this was a perfect opportunity but unfortunately, the lady did not acknowledge me."

Ndemo said that day he felt rejected, dejected and disappointed. He went back home asking himself lots of questions as to what he might have done wrong for such humiliation.

This did not, however, deter his spirits. The following day he went to Nairobi Cinema at Uchumi house and spotted another target.

“I had borrowed a friend a motorbike, 175cc Honda, I strategically positioned myself for the target. She approached and asked her if she wanted a ride but she declined,” he narrates.

Ndemo says he recalls that many moviegoers would board their buses at the Kencom stage.

“I went around the building, fired up the motorbike and lifted the front wheel up. That stunt, however, did not go well. The wheel refused to come down and what followed next I found myself in First Bank of Chicago building just in the corner of Hilton Hotel,” he says.

Ndemo says the scenes of the girl he wanted so badly standing there and laughing at him are still so fresh.

He was later taken to hospital and later discharged before he got an opportunity to study in America.

After he left the hospital, Ndemo says he tried other theatrics but all hit a dead end.

In America, Ndemo says the world is totally opposite and here it is the women who make the move rather than the man.

"A classmate approached me that I should take her to the movies. While there I just wanted to be like my father so I wanted to pay but she said we should split the cost,” Ndemo narrates.

He says he struggled to understand because to him at that time he knew it is a man’s responsibility to be in control.

All said and done, Ndemo finished his undergraduate and started working for a firm as a financial systems analyst which was his first formal employment.

When he was given one week to rest, he decided to rush back home and get himself a wife.

He landed and went to see his brother who is a professor at the School of Medicine at KNH.

“I woke up the following day and went to see him but he was in a class, so I decided to have a snack at the cafeteria. I sat there just waiting and some two ladies walked in and asked if they could share my table and I agreed,” Ndemo said.

He continues, “As we started a conversation, I asked them what had brought them and they said they were students. They asked me the same question to which I responded. I am here looking for my brother. I want him to give me his car to go look for a woman I will marry,” he says.

Prof. Bitange Ndemo is an ICT specialist and an Associate professor in Entrepreneurship.

He also teaches Research Methods and Management at the School of Business, University of Nairobi. Prior to this, he was the Permanent Secretary in the Ministry of Information and Communication where he initiated various transformative projects, including development of the undersea cables into East Africa and the development of the Kenya Open Data Initiative.

He sits on several Boards including Safaricom, Mpesa Foundation and Research ICT Africa. He is a senior advisor to the UNCDF’s Better than Cash Alliance and the UN Global Pulse.

Prof. Ndemo has spent more than two decade in the classroom and lecture halls with over 20 years of experience lecturing at the university.

Notably, he has supervised more than 100 MBA thesis projects and 10 PhD Theses.

He is recognized as a thought leader and champion of development strategies particularly aimed at transforming Kenya through ICT and social enterprise.

In shock, the ladies asked him whether he was serious about what he just said and in affirmation he responded, “Yes I want to find a woman because I need to travel back to America.”

After a few minutes, one of them was answering his questions while the other was sceptical about his American bragging.

Luckily, Ndemo says someone distracted her and he was left for some time with the one who was responding to his questions.

“I said to myself,  I have gone through the theatrics of trying to find a woman and the only thing I did not do was speak up.  I told the girl I don't need to get the car now, if you accept to marry me we can start the plans,” he says amid applause from the crowd.

Ndemo says what made him happy was the way the lady blushed and giggled.

When her colleague came back, Ndemo says they had to change the topic but luckily got a date that evening.

They met at the Forester Magnetica, where the new girl did not leave her friend behind.

"We had a chat and I was racing against time. So I convinced her that we had to go see her parents because days were moving very first,” he says that is how the journey to get a wife officially begun.

“The day before I travelled back to America, I met one of my relatives and told him about the girl and plan to marry her. He asked me about her and I described her to him. To my surprise, he said he knew her very well and that she would consume a whole bottle of 750ml of vodka by herself,” Ndemo said amid laughter from crowds.

“I looked at him but made my affirmation that I would stick with her despite all the shenanigans that followed,” he says.

He later organised so that she could travel to America but the Americans refused her a Visa and they had to use alternatives which were to secure a Canadian Visa.

She could then visit and they proceeded with their marriage plans and eventually got married.

At this point, Ndemo still insists he wanted to be a man, a true son of his father.

Ndemo recalls that one day he was sleeping in the couch, called his wife and asked her to give him the remote which was just on the table, she looked at him, held her waist and asked if that was really why he called her.

“She refused to give me the remote and demanded that I take it by myself. Well, I swallowed my pride because no one had seen me anyway,” Ndemo narrates.

One day they went to visit a sick friend and to his surprise, he witnessed his old friend get to the room, take a jacket and put it on his wife.

That he says changed his life to a new perspective of true love.

"I waited after two months and tried it on my wife and she was shocked, she thought I had gone mad but thanks to all that experience that has made me who I am today,” Ndemo says.

To him, he wanted to throw one more big surprise to her, which in their Kisii culture no man can dare do.

That was to kiss his wife in public. 30 years later, Ndemo says he is a happy husband.