• A Chinese ivory smuggler was in 2014 fined Sh20 million for being in possession of a tusk weighing 3.4 kgs 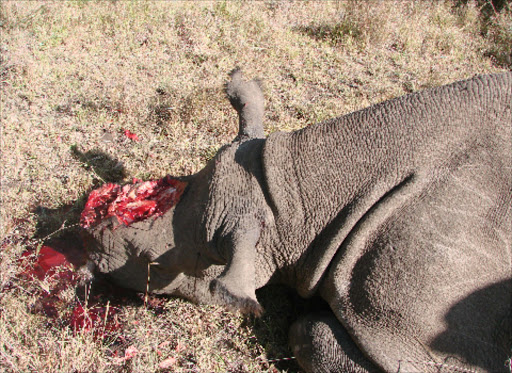 Kenya has managed to reduce the poaching of iconic species following the introduction of tough wildlife laws.

The country has also put in place various strategies that have seen poaching of wildlife and rhinos decline sharply.

A Kenya Wildlife Service report shows an 85 per cent reduction of rhino poaching in 2017 compared to 2013 when poaching was at its peak.

KWS said even though poaching had declined, frequent threats to wildlife continue.

However, it says its rangers are up to the task to deal with the threats.

Several security strategies were deployed to deal with security challenges.

Waweru told the Star that wildlife insecurity in Kenya is characterised by international trade in trophies and meat, commercial poaching for bush meat and illegal wildlife trade.

"Human-wildlife conflicts, bush meat trade and commercial poaching remain a substantial threat to wildlife conservation in Kenya and in the region."

The KWS boss said that while the illegal killing of elephants and rhinos for ivory and rhino horn is a key threat, the rise of commercial poaching for bush meat is emerging as a serious threat to species survival, as well as affecting tourism in key protected areas.

"High levels of poaching coupled with illegal wildlife trade in the past have been a threat to species conservation in Kenya."

Kenya is a key transit hub in the region to international destinations.

Waweru said KWS law enforcement units have worked closely with other law enforcement agencies in all matters of wildlife security at local, regional and international arena.

"Structured engagement with NPS, NIS, KFS, KAA, KPA, DCI, KRA, NMK, local communities, private ranches and other conservation stakeholders has been intensified to address matters of mutual interest and to draw and implement area-specific security strategies to counter poaching threats and other wildlife crime. The collaboration and engagement with the ODPP and the Judiciary in many parts of the country have also been enhanced," he said.

Interpol and Lusaka Agreement Task Force are instrumental in facilitating, coordinating and offering support where crimes of international nature occur.

The punitive wildlife laws came into place on January 10, 2014.

The Wildlife Conservation and Management Act 2013 aims to improve the protection, conservation, sustainable use and management of the country’s wildlife resources.

On January 28, 2014, a demonstration of how effective the law can be was tested. A Chinese ivory smuggler, Tang Yong Jian, was fined Sh20 million or serve a jail term of seven years for being in possession of a tusk weighing 3.4 kgs.

The government has also enhanced its investment in anti-poaching and law enforcement operations.

Waweru said poaching has been reduced as a result of some of the strategies by over 90 per cent in the last six years.

On December 16, KWS Chief Administrative Secretary Joseph Boinnet attributed the growth to "good work that has been done by KWS.

"This is an outcome of what KWS has done,” Boinnet said at the annual Conservation Heroes Day that was held at KWS headquarters, Nairobi.

Conservation Heroes Day brings together the families of KWS staff, who lost their lives in the course of duty while standing in the gap for our world-renowned wildlife.

The day also sees ‘Living Heroes’ – those who exceed expectations whilst performing their duties – honoured for their dedication to conservation work.

The theme was, “Because of you, our wildlife thrives.” It acknowledged the direct contribution that Conservation Heroes make in ensuring wildlife’s continued survival.

The CAS lauded the success that Kenya registered during the Conference of Parties meeting, of the Convention on International Trade in Endangered Species of wildlife flora and fauna (CITES), held in Geneva, August.

“The success registered during CITES - total ban on ivory trade and enlarging the number of animals listed on CITES Appendices - was the fruits of what KWS does,” Boinnet said.