Why these 5 women leaders dominated headlines in 2019

Women are shaking off stereotypic holds that webbed them in a state of political irrelevance.

• In the last election, Kenyan sent a larger number of women to Parliament. They also elected the first female governors in Kirinyaga, Bomet and Kitui.

• As the country crosses over to the year 2020, Kenyans will be watching to see how women leaders perform and their role in steering the BBI and other reforms in Kenya.

There is a new dawn in Kenya’s politics where women are shaking off stereotypic holds that have for decades webbed them in a state of political irrelevance and stepped up to the plate.

More women were elected to Parliament in the last election and the first female governors were also voted in Kirinyaga, Bomet and Kitui.

Women leaders have continued to push for their space in the political field and below are the five who made headlines this year. 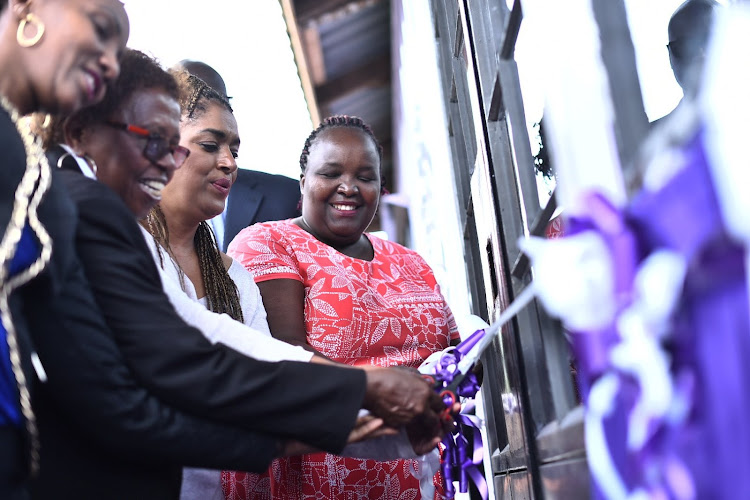 Nairobi Woman Rep Esther Passaris during the opening of a mediation services facility donated by NGAAF to FIDA on December 1, 2019.
Image: FILE

The Nairobi Woman Representative is one of the women leaders who attract love and hate almost in equal measure, owing to her no-holds-barred approach to issues and frequent confrontation with Kenyans on Twitter.

Of all the happenings of 2019, her open criticism of Nairobi Governor Mike Sonko’s style of leadership during Madaraka Day celebrations tops the list.

Her reprove seemed to have irked Governor Sonko who responded in an indecorous way, prompting her to walk out.

She is an ardent supporter of the handshake between President Uhuru Kenyatta and her party (ODM) leader Raila Odinga and the Building Bridges Initiative.

Besides this, Passaris prides herself on having rolled out several empowerment programmes, including the disbursement of Sh50 million to 400 community based women groups to support table-banking.

She has also been rolling out mediation services in an effort to resolve family disputes and several youth empowerment projects. 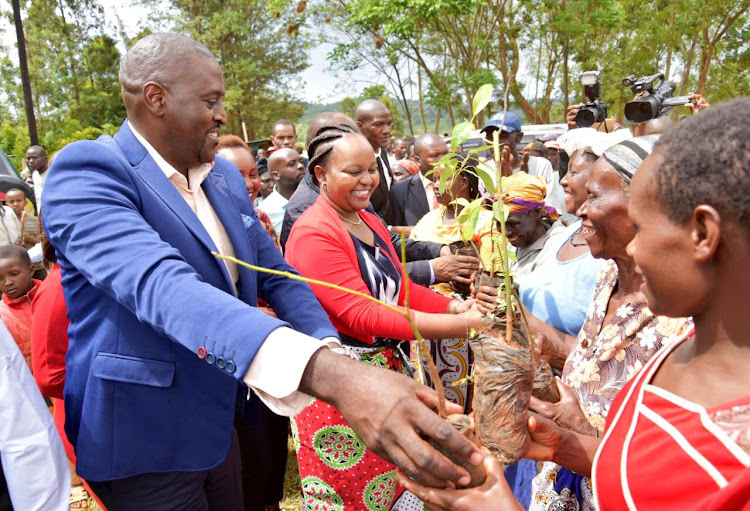 The Kirinyaga Governor has been quite active this year in social and political circles, even as she seeks to outmaneuver other leaders who are in contention for Mt Kenya chieftaincy in the run-up to 2022.

From hosting the Devolution Conference — the first in Central Kenya — to her glamorous wedding to lawyer Kamotho Waiganjo, and her popularisation of the handshake and BBI, Waiguru has been one of the constants in Kenya’s media spaces.

At the county level, Waiguru has launched overarching reforms in the health sector, including the setting up of a five-storey 500-bed capacity Kerugoya Level 5 Hospital, and ensuring availability of drugs.

In the agriculture sector, Waiguru has rolled out an empowerment programme aimed at providing farmers with 300,000 avocado seedlings that are set to improve the earnings of households by up to Sh100,000 a year.

In line with this, she recently disbursed Sh55 million shillings to various youth and women groups as part of the Wezesha Kirinyaga empowerment programme. 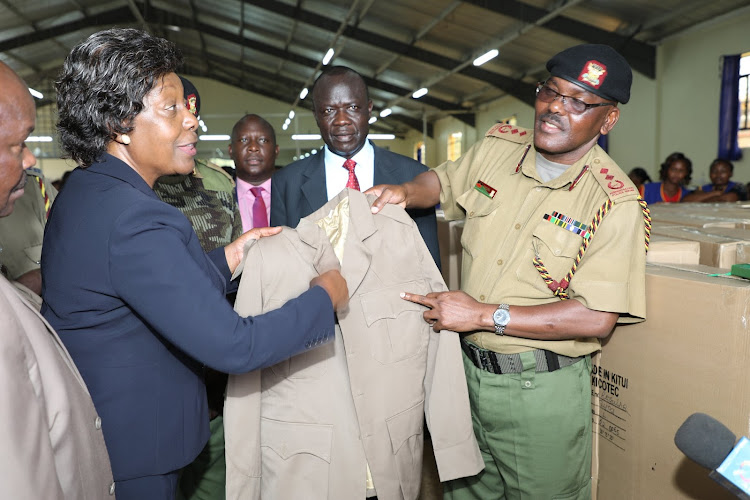 Governor Charity Ngilu at the Kitui County Textile Centre, (KICOTEC) which is making uniforms for Chiefs in the National Government.

The Kitui Governor has had a good year in the political and development spectra.

In addition to being a key proponent of the handshake and the BBI, Ngilu has been at the centre of a new political alliance with her fellow governors Alfred Mutua (Machakos) and Kivutha Kibwana (Makueni).

All these in an effort to negotiate a new political direction for the Ukambani region, away from its decades-long kingpin, Wiper leader Kalonzo Musyoka.

At the county level, Ngilu has made notable successes and broken new ground in her effort to develop Kitui.

The key highlight here has been the multi-million deal with the national government to tailor uniforms for chiefs and their assistants at the Kitui County Textile Centre.

The success of the project has received global acclamation with the county receiving an invitation to the Dallas Trade and Investment Summit in the US to showcase their products. 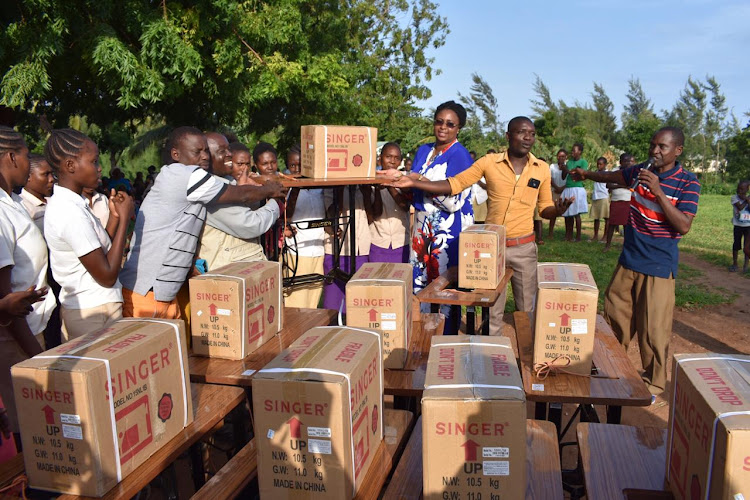 When the Malindi MP publicly declared her support for Deputy President William Ruto’s 2022 presidential bid, many wrote her political obituary.

They were almost right, as she was consequently expelled from her party, ODM.

She would, however, be granted a lifeline after the Political Parties Tribunal overturned the ODM's decision and annulled the expulsion.

Owing to her steadfastness and charisma, according to political analysts, Jumwa has deliberately adopted the attitude of rebellion in a bid to liken herself with anti-colonialists movement leader Mekatilili wa Menza, as she seeks to position herself as DP Ruto’s lever in the Coast region.

At the constituency level, Jumwa has been at the forefront in supporting talents through her newly launched Kreative Arts CBO.

She now has her eyes on Kilifi governor seat  in 2022. 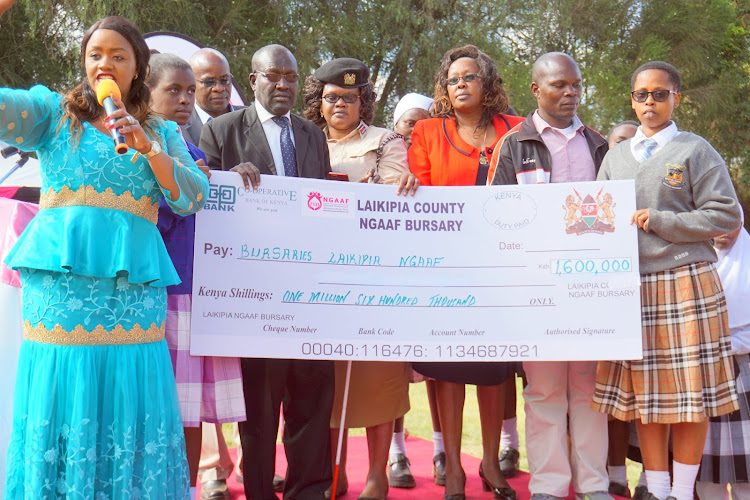 Laikipia Woman Rep Catherin Waruguru during the disbursement of bursaries.

The Laikipia Woman Representative rose to a position of political relevance this year thanks to her public support for DP Ruto, popularised through the Inua Mama Jubilee faction.

Equally, she is not known to shy away from controversy.

She has, in several instances, been at the forefront in criticising Raila and questioning his sincerity in the handshake deal with Uhuru.

She has also taken on Cotu secretary general Francis Atwoli over his pronouncement aimed at casting aspersions on Ruto’s ability to become the next president.

Above and beyond all this, the Laikipia Woman Rep has sponsored a Bill in Parliament – a Cancer Bill - that if passed will grant cancer patients free treatment.

This is in addition to the women and youth empowerment programmes she has launched in Laikipia, including one presided over by Ruto in November this year.

As the country crosses over to 2020, Kenyans will be watching to see how women leaders perform and their role in steering the BBI and other reforms.

Post a comment
WATCH: The latest videos from the Star
by OLIVER MATHENGE Digital Editor
News
28 December 2019 - 06:00
Read The E-Paper