Why Kenyans spell doom for economy in 2020

According to the Kenya Economic Survey 2019, unemployment stood at 9.3% last year.

• Since July, at least 2,000 workers have lost their jobs and more companies are intending to get rid of workers before the end of the year.

• A spot check by the Star revealed the average price of a 2-kg packet of maize flour retails at Sh135, the highest price in the last three years. 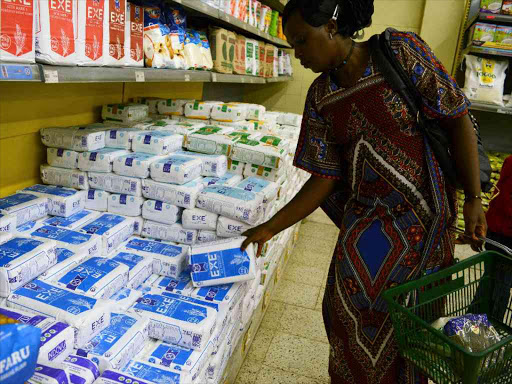 A customer shopping for Unga group ltd products at a supermarket in Nairobi.
Image: Photo/Enos Teche

"The price of food especially maize has been going up all through the year. A 2-kg pack of any brand retails at more than Sh12o. I expect the price to be higher in 2020."

This is the confession of Robert Ochieng' a motorcycle rider in Westlands.

He says the heavy rains have caused the maize to rot in the farms resulting in an expensive food basket altogether.

In Kenya before the market liberalisation in 1994, the government set farm-gate prices and consumer prices for all basic agricultural commodities like maize, maize meal, sugarcane, sugar, wheat grains, wheat flour, bread, milk and milk products among others.

A spot check by the Star revealed the average price of a 2-kg packet of maize flour retails at Sh135, the highest price in the last three years.

As you move away from major towns the price of flour goes higher.

Shopkeepers and retailers sell the same packets for as high as Sh150 due to transport costs.

The increased price makes the cost of living the biggest pain point in an increasingly bad economy for the poor.

This follows successive hikes by manufacturers in the last six months that have seen the commodity cost move the maize flour from Sh110.

Ugali is now more expensive than chapati, a departure from the norm given that maize flour is Kenya’s staple food.

A 2-kg packet of wheat flour is retailing at about Sh125, which is Sh20 less than maize flour.

Most Kenyans the Star spoke too said the economy is biting them hard.

From shopkeepers in Nairobi to boda-boda operators, importers in Mombasa to big manufacturers in Industrial Area, from small and medium enterprises (SMEs)  to blue-chip companies listed on the Nairobi Securities Exchange (NSE), everyone is hurting.

The country’s inflation has risen to 4.95 per cent in October from 3.83 per cent in September according to the latest Kenya National Bureau of Statistics.

The KNBS attributed the increase to higher food prices.

But it is not just the cost of food that is wrong with the economy.

Kenyans On Twitter in November took to social media to vent their frustrations over the job cuts using the hashtag #Ilostmyjob #Savemyjob and #Ourjobsmatter.

A video of a former Sportspesa employee Jane Minayo lamenting on her predicament was posted online by Kakamega Senator Cleophas Malala.

In the video, Minayo, a single mother painfully narrated her situation urging the government and its top officials to intervene in her situation as well as that of the other 362 others who lost their jobs.

“We work for our children so that in the future, they can also learn how to depend on themselves. During Deputy Ruto’s campaigns, I remember him saying that is country is for ‘hustlers’ please remember the ones that are in the low-class level. Do not undermine us.”

Julia Awuor, who also shared a video online, explains how losing her job will affect her life and those who depend on her.

“I received a letter saying that my job is over. I am a mother. Everything is on me. That is school fees, rent and a nanny who will also get affected by this. We need to share our stories widely and ask ourselves as Kenyans. What is going on?" she lamented.

Since July, at least 2,000 workers have lost their jobs and more companies are intending to get rid of workers before the end of the year.

Majority of Kenyans on the street said they expect more job cuts because technology will cause disruptions.

"While technology disruptions have played some role, the job cuts further suggest the economy is not growing first enough to absorb millions of job seekers," one said.

The problem, according to economists, is made worse by the increasing competition, especially from cheap imports.

According to the Kenya Economic Survey 2019, unemployment stood at 9.3 per cent last year, with the GDP at 8.56 trillion.

However, in the financial year ending June 2018, the government said the economy grew by 6.3 per cent last year, generating 840,600 new jobs.

It said 83.6 per cent of the new jobs were created in the informal sector and 16.4 per cent in the formal sector.

Kenya's economy slows down in first three months, GDP growth at 5.6 per cent

The figure confirm that the economy activity subdued by 0.9 percentage point compared to 2018
Business
3 years ago

Kenya's move to a cashless economy slow but steady- survey

Poor rainfall, trade tension cuts Kenya's economy to 5.6 in first half of 2019

Central Bank's comment of the country's economy marries that of international bodies like the World Bank and the International Monetary Fund (IMF) ...
Business
2 years ago
by LYNDSAY NYAWIRA News Reporter
News
26 December 2019 - 10:00