•Notwithstanding, Kenya's ranking in ease of doing business by the World Bank improved to 61 out of 190 economies globally.

Thousands of families are staring at tough economic times following a wave of employee layoffs affecting many companies.

At least 2,000 workers have lost their jobs since July and many more companies have announced intentions of getting rid of hundreds of workers before the end of the year.

Kenya is one of the fastest-growing regions in Africa, but its performance is often hit by drought.

Violence after the December 2007 presidential election and disputes over the following two polls led some investors to scale back investment, hurting growth.

Job losses have hit nearly all sectors of the economy from commercial banks to insurance firms, manufacturing to telecommunication firms.

While technology disruptions have played some role, the job cuts further suggest the economy is not growing first enough to absorb millions of job seekers. At least 50,000 young people graduate from public universities annually.

The problem, according to economists, is made worse by the increasing competition, especially from cheap imports.

About nine firms have so far sent home at least 2,000 employees.

The latest to announce retrenchment plans are betting giants SportPesa and Betin.

The betting firm on Wednesday told its 362 employees at its Kenyan unit that they would be laid off as it finalises its exit from the country. 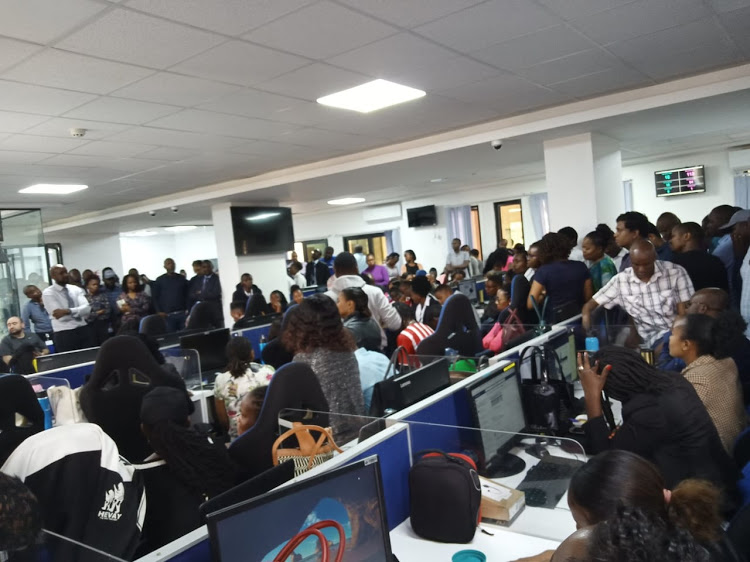 The betting firm operating in Kenya as the Pevans East Africa Limited ran into trouble with the law alongside 27 others at the end of July as the Ministry of Interior moved to purge the gambling firms over outstanding tax arrears.

The tax in question related to the remittance of withheld customer winnings even as the firm joined rival Betin in protesting the claim in court. Their suit was quashed at the end of August.

On September 25, Sanlam said it had notified its staff to apply for voluntary early retirement within a week as part of its cost-cutting measures.

The listed company said it expected to save close to Sh200 million from the earl retirement.

Experts have advised the government and private sector to stop job cuts and scale down on non-urgent projects to boost tax levels and achieve ...
Counties
3 years ago

Earlier in August, Stanbic Bank Kenya offered its permanent and pensionable employees a voluntary early retirement package, with the liberty to accept or decline.

Bank chief executive Charles Mudiwa declined to disclose the targeted number, however, sources estimated it to be  255 employees.

In 2018, Britam spent Sh664 million to lay off 110 staff members under a voluntary early retirement scheme to cut costs.

Institutions of higher learning have not been spared.

Some analysts have said the rise in the digital economy has contributed to job losses but others point to policy blunders including over-reliance on external borrowing and corruption.

Consumer Downtown Association Executive Director Japheth Ogutu said the immediate impact of the mass job losses is that the living standards of many Kenyans will drop below the poverty line.

“It is very clear that things are tumbling down, the value of money is dropping and the cost of living is high. Players in the agriculture and manufacturing sectors are finding it hard to find the market,” Ogutu told the Star.

“The government needs to come up with a mechanism to contain this problem.”

He said one remedy is capitalising expenditures locally and reducing over-reliance on external borrowing.

“The high corruption reported is also enriching few people as the economy collapses,” he said.

Ogutu also called for the revival of local industries and businesses to grow domestic wealth.

The difficult economic times cited by economists contrasts sharply with the improving business environment that has seen Kenya move up in the ease of doing business ranking.

The latest statistics show that Kenya has gone up 19 places to 61 in the World Bank's ease of doing business 2019.

The Federation of Kenya Employers said on Friday that the current situation was bound to happen due to previous “bad decisions” made by legislators and leaders.

“This is as a result of bad decisions we have made. It is a delayed impact of poor governance. It is a desperate situation for employees,” CEO Jacqueline Mugo told the Star on the phone.

Mugo dismissed the recent drop in inflation announced by the Kenya National Bureau of Statistics, which said the country's year-on-year inflation fell to 3.83 per cent in September, from 5.0 per cent a month earlier.

“Inflation is down but it does not reflect the issues on the ground,” Mugo said. "There are a lot of issues, we need to look at factors like purchasing power which are not adding up.”

Even so, some economists say the ongoing wave of downsizing should not be blamed entirely on government.

“Every company has its own reasons to let go its employees,” Institute of Economic Affairs CEO Kwame Owino  said.

Kenya's economy slows down in first three months, GDP growth at 5.6 per cent

The figure confirm that the economy activity subdued by 0.9 percentage point compared to 2018
Business
1 year ago

Though the ease of doing business ranking improved, Owino said this does not necessarily mean a rise in employment.

Jobless Kenyans have taken to social media, explaining how job losses will hurt their living.

“We have loans to repay, children to take care off, parents to support, rent and daily expenses to meet. Where do we even start?” one layoff victim said on Twitter.

“The wrath of jobless Kenyans will soon befall the government. It's like magma and soon enough it will erupt. Kenyans deserve better!,” Ibra MosheQs said.

“I was paying for my studies and house bills, being a family man, I was supporting my mom's health, my young brother. I was also paying for a certain kid'sfee, she is now at home. I am now jobless and everything has stopped even after applying for more than 50 jobs,” Shonko Andrew said.

According to Kenya Economic Survey 2019, unemployment stood at 9.3 per cent last year, with the GDP at 8.56 trillion.

In the financial year ending June 2018, the government said the economy grew by 6.3 per cent last year, generating 840,600 new jobs.

It said 83.6 per cent of the new jobs were created in the informal sector and 16.4 per cent in the formal sector.

Karauri says other betting firms haven't been subjected to the rules they had been given.
News
1 year ago

Mobicom sacks over 800, as the Telkom business dips firm stares at empty pockets

Betin was the official training partner for Harambee Stars during the Africa Cup of Nations.
News
1 year ago

Flower farmers in Naivasha are now employing workers on contract in a bid to address the rising wage bill according to the Kenya Plantation and ...
Counties
2 years ago
by ELIZABETH KIVUVA Business Writer
News
05 October 2019 - 08:00