One goat buys one year's NHIF cover in Kajiado

Programme targets 4,000 more families , easier for pastoralists to pay with a goat.

• County has registered 3,550 families for the one-goat initiative. They are mostly pastoralists for whom it's easier to pay with an animal. 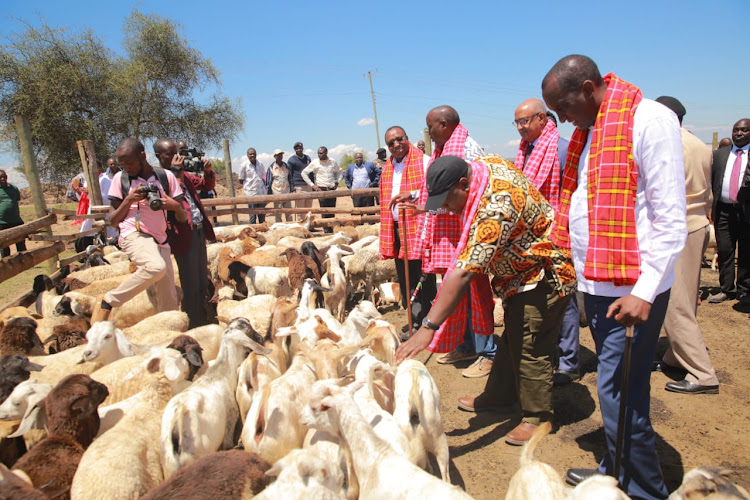 It's easy for pastoralists in Kajiado county who can pay for one year's coverage with one goat under the Mbuzi Moja, Maisha Bora initiative.

The county is targeting 4,000 more families.

“The NHIF supa cover cost  is Sh500 per month and the yearly cost is Sh6,000. One can pay cash or an alternatively a goat that sells for an estimated Sh6,000," Governor Joseph Lenku announced on Thursday.

He made the announcement during the county's second goat and sheep auction in Kajiado town. It raised Sh26 millon to help people get NHIF cover.

The fundraiser's master of ceremonies was Interior CS Fred Matiang’i assisted by Environment CS Keriako Tobiko. It was attended by Narok's local and elected leaders led by Governor Samuel Tunai.

Lenku said that in the last year the county registered 3,550 people from the pastoralist communities to join NHIF through the one-goat NHIF  initiative.

He said the money raised from the auction will go a long way to support 4,000 families get NHIF medical over.

The governor said Mbuzi Moja, Maisha Bora is worked out in collaboration with NHIF to achieve maximum coverage and save high out-of-pocket spending on quality, affordable services.

Kajiado county is home pastoralist communities where paying with animals is easier than paying with cash.

During the event, the Health CEC Esther Somoire said her department has introduced a subsidised contribution of Sh3,000 for the regon's poor urban population.

“My department will pay the remaining Sh3,000. Currently, the county pays fully for 1,500 poor families across the region,” Somoire said.

Post a comment
WATCH: The latest videos from the Star
by KURGAT MARINDANY Correspondent
sponsored by THE STAR KENYA None
News
29 November 2019 - 23:00
Read The E-Paper