The rehabilitation of the tower followed the moving out of illegal settlers.

• The government seeks to plant about 10 million trees in the water tower. 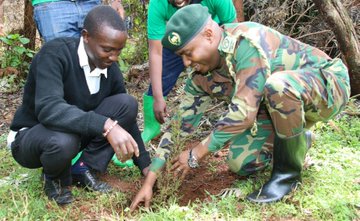 The Kenya Forest Service has exuded confidence that all the tree seedlings planted early this month in Maasai Mau will survive.

The rehabilitation of the tower followed the moving out of illegal settlers.

"I can confirm that the entire trees planted are doing well due to favourable weather conditions," Kamau told the Star on phone.

Kamau conducted an aerial and ground tour of the Maasai Mau Forest Ecosystem on Thursday to monitor the progress of tree planting activity.

Speaking during the launch of the tree planting drive, Tobiko said 100 per cent of the settlers had vacated, paving way for the reclamation of the catchment area.

The settlers vacated after a 60-day window for them to voluntarily move out lapsed October 30.

The government seeks to plant about 10 million trees in the water tower.

Yesterday, Kamau said approximately half a million tree seedlings have been planted since the launch of the restoration program.

"I applaud the forest adjacent communities for complementing the Kenya Forest Service and stakeholders by participating in the ongoing tree-planting activities," Kamau said.

The CCF said he gave encouragements to forest adjacent communities to participate actively in forest conservation.

This, he said, is through the formation of Community Forest Associations that will inform legal frameworks through which they can sustainably benefit from forest resources.

During the launch of the tree planting drive, 200,000 seedlings were planted manually.

The aircraft, on the other hand, planted over four million seedlings.

This means that the tree seedlings planted so far have hit 4.7 million.

Phase one removal of illegal settlers in Maasai Mau Forest was carried out in July and August 2018.

The operation targeted about 2,400 settlers in Nkoben and Kass Fm areas of Maasai Mau.

An estimated 4,500 hectares of forest land was recovered.

The government said phase two of evictions targeted more than 10,000 households who have encroached the forest.

Close to Sh 1 billion is needed for the restoration exercise.

"These areas were completely degraded and cannot be restored by natural regeneration hence the need to fence off to facilitate tree planting in these areas," part of the report says.

The tower which has been divided into blocks will be adopted by various organizations and agencies for rehabilitation.

Already, the Kenya Water Towers Agency has announced plans of fencing 50 kilometres of the tower.

CS urged to humanely manage the consequences of evicting 60,000 people.
News
3 years ago

There is no turning back on Mau evictions

CS said Maasai Mau is under the government after the promulgation of Constitution.
News
3 years ago
Post a comment
WATCH: The latest videos from the Star
by GILBERT KOECH News Reporter
News
24 November 2019 - 20:00
Read The E-Paper