What Ranneberger told Washington about Wako on corruption

Ranneberger detailed reasons why Wako was linked to graft and should be banned from entering the US.

• Ranneberger said that Wako engaged in and benefited from public corruption in his capacity as Attorney General for the past 18 years.

• Wako had been Attorney General since 1991, serving under ex- Presidents Daniel Moi and Mwai Kibaki. 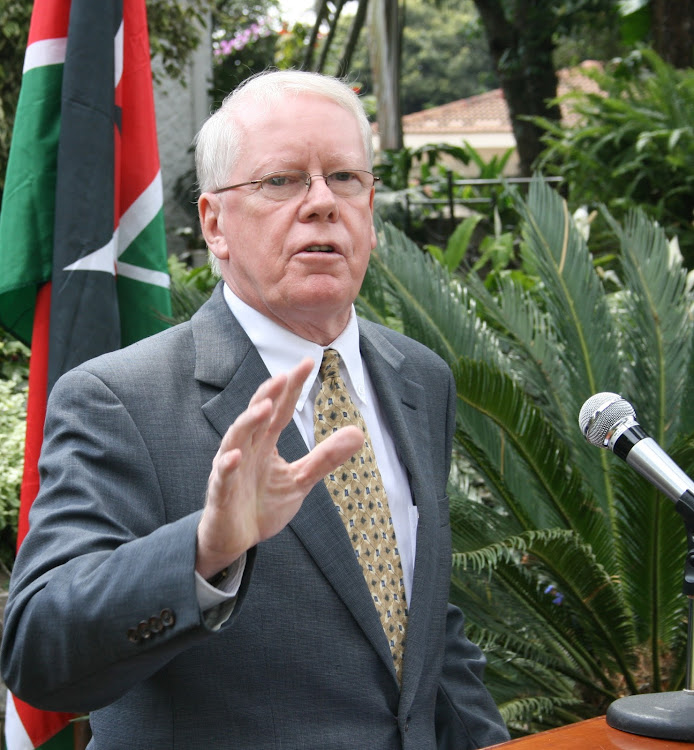 The 4,676 word cable which is among the raft of documents on Kenya leaked by Wikileaks in 2010 sought a security advisory opinion on Wako's status in case he sought a US visa.

On November 4, 2009, Wako confirmed having been banned from the US and threatened to sue the American government for defaming him.

""Let me state that Sitswila Amos Wako has not been engaged in corrupt actions which have adversely affected the national interests of the United States of America or at all," Wako said at the time in his defence.

On Monday, the State Department public named Wako, his wife and son for allegedly being involved in corruption barring them from entering the US.

"Today, the Department designates former Kenyan Attorney General Amos Sitswila Wako due to his involvement in significant corruption," a statement from the US State Department said.

"Section 7031(c) (of Department of State, Foreign Operations, and Related Programs Appropriations Act, 2019) provides that, in cases where the Secretary of State has credible information that officials of foreign governments have been involved in significant corruption, those individuals and their immediate family members are ineligible for entry into the United States," the statement added.

The law also requires the Secretary of State to publicly or privately designate such officials and their immediate family members.

"Today’s action sends a strong signal that the United States is a valuable partner in Kenya’s fight against corruption.  Economic prosperity for all Kenyans is only possible by defeating the scourge of corruption, which also requires a functional, fair, and transparent criminal justice system.  The United States will continue to stand with all Kenyans as they strive to curb and punish corruption in Kenya," the statement stated.

In his cable to Washington, Ranneberger defended his request for an advisory on barring Wako stating that the former AG engaged in and benefited from public corruption in his capacity as Attorney General for the past 18 years.

"This he did by interference with judicial and other public processes, and that this corruption has had a serious adverse impact on U.S. national interest," he said.

The former envoy said  Wako had not only failed to prosecute senior governmental officials but also claimed that he actively thwarted their prosecution.

"He has been repeatedly accused by civil society groups as well as the head of the Kenyan Anti-Corruption Commission of failing to prosecute cases of official corruption," he said.

He notes that Wako has been identified by the UN Special Rapporteur on Extrajudicial, Arbitrary or Summary Executions in Kenya as and the chief obstacle to prosecuting anyone in authority.

Wako has been AG since 1991, serving under ex- Presidents Daniel Moi and Mwai Kibaki. He is married with two children.

Ranneberger detailed reasons why Wako was linked to corruption.

Ranneberger said that Wako's corrupt practices were investigated and documented in five reports.

The first is the Report of the Judicial Commission of Inquiry into the Goldenberg Affair (October 2005). This was an initiative of the Kibaki administration to investigate a massive financial scam in the mid-1990s.

The second is the Kenya National Assembly's Public Accounts Committee's report on the Anglo-Leasing scandal (March 2006).

The third is the Kenya Anti-Corruption Commission's  status report to Kibaki on a number of the Anglo-Leasing contracts (June 2006).

Fourth is the report of the United Nations Special Rapporteur on extrajudicial killings or summary executions Mission to Kenya (February 2009) which discussed police killings and post-election violence.

The fifth is the Report of the Commission to Investigate Post-Election Violence (Waki Report ) October 2008).

Amos Wako, wife and son barred from entering US

The former envoy claimed that Wako, who served under president Moi, remained in office when their was change of guard.

"Wako had already been in office for 11 years at the time of Kibaki's assumption of power. One of the scandals that Kibaki inherited was the Goldenberg affair," he said.

The Goldenberg scandal was hatched and executed between 1991 and 1993. It was deemed as a major foreign exchange earner for Kenya that led to the loss of Sh100 billion.

"Commissioned by Kibaki in October 2005. Wako figures prominently in the report," Ranneberger says.

"The Attorney General failed to move on the scandal, even as details of its magnitude and the senior level of officials allegedly involved were revealed."

Ranneberger claimed that the AG did not file the first case relating to the Goldenberg scam despite it having already been the subject of widespread media coverage.

"Even after charging the suspects which it had selected the Attorney General's office appears to have proceeded with the cases in a most haphazard and lethargic fashion," he said.

" In this scenario it is not surprising to note that although Wako commenced Goldenberg related prosecutions in 1994 it was not until 1998 that the hearing of only one case commenced."

In the report, He notes that beneficiaries  of the scandal, which are a number of government officials have never been prosecuted.

"Once more, Wako played a key role in ensuring that senior Kenyan officials were protected from prosecution," he said.

Ranneberger said his performance as the principal legal advisor for the Government was questionable at best.

"In fact, it appears that he and his office expended its effort almost exclusively on providing comfort to the contractors .. it is clear that the AG was focused primarily on protecting those in Kenya's political and business elite," he said.

This Commission, commonly known as the Waki Commission, investigated the violence perpetrated in December 2007 elections.

In the Waki report, they noted that Wako could not act 'effectively or at all to deal with such perpetrators'.

"One can find an Attorney General who has successfully maintained an almost perfect record of non-prosecution," Ranneberger said.

"He accomplishes this through the most complex of smoke and mirrors tactics, seeking to appear to desire prosecution while all along doing his utmost to protect the political elites."

"It should be noted that in 2009 the Attorney General,s salary was increased . An even greater reward for an individual who has spared many of those responsible for Kenya,s high level of corruption," he said.

CONFUSION KEPT HIM IN OFFICE

Ranneberger said it was Wako's ability to 'obfuscate and confuse' while giving an appearance of action that has so successfully stymied the prosecution of Kenya's many mega-scandals.

"It is a skill that has kept him in office, provided him with personal rewards, and served to damage both Kenya's movement toward a stable democracy and U.S. interests in that same stable democracy," he said.

Wako involvement in alleged public corruption had serious adverse effects on promoting democracy and good governance and sustainable economic development in the US, Ranneberger said.

During her visit to Kenya, Secretary Hilary Clinton pressed for implementation of the reform agenda and dismantling Kenya's culture of impunity which was at the core of U.S. policy.

"Wako has repeatedly demonstrated that he is an obstacle to reform in Kenya. As a result, he is pillar standing against vital U.S. interests in Kenya," the former envoy said.

" In the aftermath of the post-election violence, Wako's obstruction of justice in both the Goldenberg and Anglo-Leasing scandals has ensured that they continue to be in position to steal funds to support election campaigns,"

He claimed that the Kenyan state is 'weaker and less' able to enhance the lives of its population and maintain the security of the country's already 'porous and dangerous' border areas.

In the report the envoy noted that Wako was negligent and showed a reluctance to proceed with cases.

"Wako is the major obstacle to ending the culture of impunity in Kenya and recommends that he be made ineligible..."