• What do any of our millennials age cohorts really know about the life and times of our independence heroes such as Tom Mboya, Ronald Ngala, Pio Gama Pinto or even Jomo Kenyatta himself?

•  Animation is the key technology for providing the kind of media products that young Kenyans will appreciate and learn from about our past, and the heroes who played a role in moving Kenya forward. 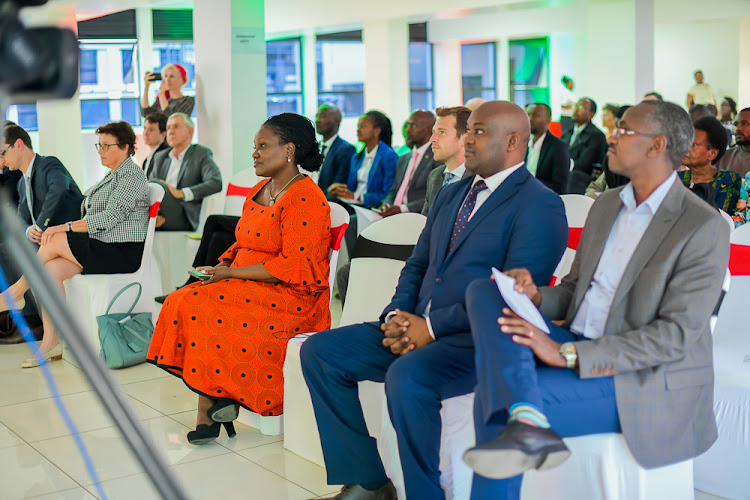 Admi MD Laila Macharia (L) and attendees during the launch of the gaming course in Nairobi on October 27
Image: COURTESY

I still remember when about 10 years ago, a friend of mine living in Europe called to ask if it was true that there was an affordable, high-speed, fibre optic cable Wi-Fi in Kenya.

As I live in Mombasa, where President Mwai Kibaki had launched the new underwater fibre-optic cable, he thought I might have some inside knowledge.

He had a specific reason for being excited as he was bringing up a young family in Europe. And though he and his wife were from the same Kenyan tribal community, it had proved impossible to teach their kids Kiswahili, let alone their mother tongue.

They spoke English, the language of their adopted country. But neither he nor his wife had time to teach them any African languages. And yet they could see that online language teaching services could be found all over the internet for just about any of the European nations.

Indeed the standard way to learn a language in Europe was to hire a freelance language tutor and to then have personalised classes over the internet.

Whether one lived in Spain, Finland, Norway, Germany or Italy, a freelance language tutor was just a click away.

My friend hoped that it would soon be possible to engage online tutors for his children so that they could learn Kiswahili as well as their mother tongue through this resource while still living and attending school in Europe.

And even more, he hoped his children would hear, from their language tutor, ancient African folk tales, such as he had heard from his grandmother.

Well, just like the ground-breaking technology of undersea fibre optic cables made high-speed Wi-Fi affordable in Kenya, so may the technology of animation make it possible for young Kenyans (whether inside Kenya or abroad) to learn of their cultural heritage simply by watching animated movies.

When I saw an Op-Ed column in The Star a few weeks ago titled “Opportunity for young creatives”, as a parent, I was naturally curious to see what this was about.

And when I read of a Nigerian animation video titled “Malkia, Warrior Queen”, I straight away went to YouTube to watch it.

I immediately thought of my friend and wondered, with millions of Kenyans living in the diaspora, and many of them with children, would this not be the ideal way for them to learn our traditional stories and our history, and to remember who they are and where they came from?

I also thought of all the job opportunities that will come with a well-developed animation sector — the voice-over artists; the musicians; the composers; the storytellers; the technical staff; and so many others.

With the African Digital Media Institute (and especially as it is partnering with a French leading animation producer, Rubika, to help market Kenyan animations overseas) I am hopeful, that creative Kenyans will soon have a new platform to share their work.

In Japan, which is one of the global leaders in animation, there is no famous legendary leader or warrior, who has not already been immortalised in an animation product targeting both adults and children.

I believe the day may soon be here when the same can be said of Kenya.

Ask yourself, what do any of our millennials age cohorts really know about the life and times of our independence heroes such as Tom Mboya, Ronald Ngala, Pio Gama Pinto or even Jomo Kenyatta himself?

And going even further back, what do young Kenyans know about the heroic sacrifices made by Dedan Kimathi that led to his statue being erected prominently in the Nairobi CBD?

Animation is the key technology for providing the kind of media products that young Kenyans will appreciate and learn from about our past, and the heroes who played a role in moving Kenya forward.

We could go even further and have full-length animations in the Japanese fashion, dedicated to telling the story of Gor Mahia (a mythical Luo warrior); Mekatilili wa Menza (the Giriama woman who led one of the earliest insurrections against colonial rule); Koitalel arap Samoei, who led the Nandi resistance to the British colonial rule for a full decade, and was only defeated through treachery rather than on the field of battle; or the Kikuyu seer Mugo wa Kibiru, who is said to have prophesied the coming of the British, decades before it came to pass.

Creative young Kenyans can no doubt retell these stories and more, in a manner that will memorialise and celebrate the men and women who sacrificed to help create the Kenya we live in today.

Post a comment
WATCH: The latest videos from the Star
by GEORGE SUNGUH
News
17 November 2019 - 14:06
Read The E-Paper