Justice Byram Ongaya declined to extend Francis Wangusi's stay at CA saying that decision can only be made by relevant authorities.

• Justice Ongaya on Friday ruled on a petition filed in July this year by Okiya Omtata, seeking, among other things, to stop any appointment of Wangusi's successor until a proper board is constituted. 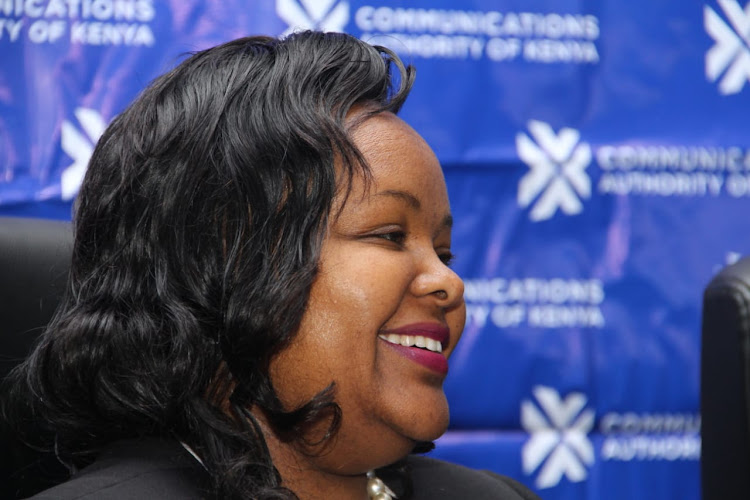 Gituku said the media "wrongly" reported that the court had quashed the appointment of Wanjau because she was appointed by a board that was not properly constituted.

He said Justice Byram Ongaya did not rule on Wanjau's appointment and also did not direct that former DG Francis Wangusi resumes office pending appointment of a substantive DG, as reported by some outlets.

"The headlines that boldly attribute victory to the former CA director general on the basis of yesterday's court decision are misplaced and misaligned with reality," he said.

He was accompanied by Wanjau and Principal Administrative Secretary of ICT Eric Kiraithe, who refused to answer media questions.

Justice Ongaya on Friday ruled on a petition filed in July this year by Okiya Omtata, seeking, among other things, to stop any appointment of Wangusi's successor until a proper board is constituted.

On Friday, Justice Ongaya granted that request. However, he declined to extend Wangusi's stay at CA saying that decision can only be made by relevant authorities.

"Any purported recruitment of the successor of Francis Wamukota Wangusi as director general of CAK as singlehandedly conducted by the chairman of the board of the authority is unconstitutional and unlawful, and hereby nullified," Justice Ongaya ruled.

Gituku said this pronouncement was in reference to the job advertisement the authority had placed in the local dailies in July ahead of the lapse of Wangusi's contract in August.

Gituku added: "The court, after considering the unique circumstances posed by the lack of a sitting board at the time of the lapse of Mr Wangusi's contact on 21.08.2019, declined the petitioner's prayer that he DG be allowed to return to office."

Wanjau is a commercial lawyer with 16 years of legal, policy and regulatory experience in the ICT sector.

She also serves an assistant director, regulatory affairs and governance at the CAK.

Wanjau replaces Francis Wangusi who has been at the helm of the authority since 2012.
News
3 years ago

Gituku said Wanjau’s acting capacity is not affected by the court order.
Counties
3 years ago
Post a comment
WATCH: The latest videos from the Star
by JOHN MUCHANGI Science Editor
News
16 November 2019 - 14:27
Read The E-Paper