Raila to Ruto : Don't get jittery over BBI report

•Raila said they initiated BBI together with President Uhuru Kenyatta so as to end such killings like that of Jola.

•He urged Kenyans to be calm and wait for the report to be released adding that it will be published for all Kenyans to read. 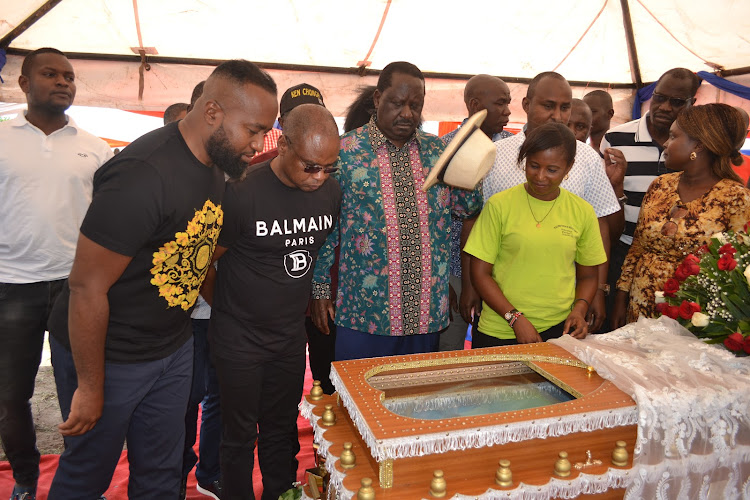 ODM leader Raila Odinga has hit out at Deputy President William Ruto and his allies for rejecting the proposed Building the Bridges Initiative BBI report.

The Building Bridges Initiative taskforce on Wednesday completed filing its report after collecting views of Kenyans across the country.

The report is yet to be made public.

Raila criticized the DP for rejecting a report which he has not seen.

''There will be time for views of Public to they give their input and amendments to be done, another team will also be appointed to come up with the proposed policy which will be taken to the county assembly,'' he said.

He spoke during the burial of Michael Ngumbao Jola who was shot dead during campaign violence on October 15.

Raila said they initiated BBI together with President Uhuru Kenyatta so as to end such killings like that of Jola.

''I told Uhuru that the journey to Canaan was still on only that River Jordan had crocodiles and wanted to build a bridge to cross that's why we formed the BBI Commission but others have begun opposing it even before the report is released,'' he said.

Raila said the BBI will end tribalism in the country and also ensure there will be no more votes rigging during elections, corruption and stealing of Public property.

Mombasa Governor Hassan Joho who was in attendance said for the last few days Ruto and his allies have been opposing the BBI without seeing or reading it.

''We are ready to battle with anybody, if its to go round we will go and if it's talking we shall talk,'' Joho said.

Joho said the aim of BBI is to create a system and a government that will ensure everybody feels included in the government.

His sentiments were echoed by his Kilifi counterpart Amason Kingi who said BBI will address historical injustices and majimbo.

''Kenya will not move forward because of hatred for Raila, such people do not deserve to be leaders even MCAs because they are opposed to national cohesion, and unity of all Kenyans,'' Kingi said.