LIGHT AT END OF THE TUNNEL

Police bullish war on drugs at the Coast bearing fruit

• Number of suspects being arrested during night operations has reduced from an average of 30 daily to six in the last three months.

• Regional coordinator says bhang remains a menace, terms it most trafficked drug in the region. 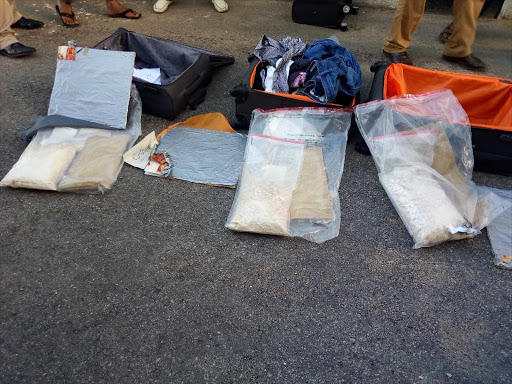 On October 2, police constable Hezbon Okemwa went missing and days later, his badly mutilated body was found in a thicket.

The incident caused conflict between police and local residents, with the officers accused of human rights abuses in the immediate aftermath.

Dozens of Lamu residents reported being beaten up and suffering major injuries at the hands of the police.

It also emerged that 'Lone Ranger' Okemwa was a brave officer who had dedicated his life to fighting the drug menace in the Coast.

Could his death have been a message from the traffickers who are feeling the heat of the crackdown?

On Wednesday, regional police commander Rashid Yakub said they cannot rule out anything but they are still probing the cause of his murder.

With the arrest, extradition and prosecution of Baktash and Ibrahim Akasha and several other swoops that have curtailed the trade of suspected drug traffickers, state agencies now say there is light at the end of the tunnel.

The number of suspects being arrested during night operations by security officers at the Coast has reduced significantly from an average of 30 daily to six in the last three months.

This, according to anti-drugs crusader Abdalla Abdulrahman, is an indication of improved security.

He attributed this to the drug fight, which he said is showing signs of succeeding.

“Do you know there was a time there was a shortage of drugs in Mombasa and at the Coast? I say this because the price of hard drugs like cocaine and heroin had gone up,” Abdulrahman said.

Coast regional coordinator John Elungata told the Star on Wednesday that they have been relentless on drug traffickers.

He said the supply of hard drugs like cocaine and heroin has run short. However, he said, bhang remains a headache for the security officers.

“Bhang is the most trafficked drug at the Coast, more than cocaine and heroin,” Elungata said.

He said police are now trying to establish why the Coast is the most preferred destination for bhang.

“We are investigating the possible reason. They could be lacing bhang with some other drugs."

He said police are now probing whether traffickers have established distilleries at the Coast to turn bhang into other forms like liquid, powder or even gas.

Yakub said the recent seizure of a Sh12.6 million bhang haul in Kiembeni, Mombasa, is an indication that the community is tired of the drugs and has joined the war against it.

He said the arrest and prosecution of the Akasha brothers sent shock waves among drug barons in Kenya, especially at the Coast.

“[Interior CS Fred] Matiang’i’s efforts under orders of President Uhuru Kenyatta have started yielding fruits. The push should be relentless,” the Muslim cleric said on the phone on Tuesday.

The Kemnac chairman said peddlers being used by the barons are, however, posing major challenges "because they wield their own powers".

They are the ones who work in cahoots with police bosses at police stations and thus are always shielded from arrest, he noted.

“Most of them collude with police especially in Ukunda, Diani, Mombasa, Kilifi, Lamu and Taita Taveta. They are also the same in Nairobi and Central region,” Sheikh Ngao said.

“At the Coast, every week some police officers collect ‘pesa ya kiwanja’ (protection fee). Then the peddlers are allowed to sell the drugs without being disrupted."

He said police conjure 'weak' cases against the traffickers when forced to arrest them because of this fee.

However, Elungata ruled this out saying there was an overhaul of officers at the Coast after Matiang’i ordered a ruthless war against drugs.

ReachOut Centre, an organisation dealing with drug addicts, said the war on drugs at the Coast has stalled. The organisation's boss Taib Abdulrahman said security agents fight drug users and not traffickers.

“The whole exercise seems like a PR exercise,” Abdulrahman said.

He said the number of addicts does not seem to go down. “How can I say the war is succeeding? I cannot say that. I do not see it on the ground,” he said on Tuesday.

Elungata, however,  said Abdulrahman is looking for donor funding.

“If the donors see there are no more addicts, he will be out of the job and they will not send money. He must say there are more addicts than before."

The biggest challenge they face is the perception that the public has on the war, the regional coordinator said, adding that managing the perception of the masses is one of the hardest things to do.

“They always believe that this war cannot be won, which is not the case."

The regional administrator lauded the public as 'a great asset in the war' adding that there has been a change of attitude, especially among the youth.

They have been helping police get crucial information on traffickers, he said.

Sheikh Ngao and Abdulrahman said the Judiciary is the weakest link in the fight.

However, Yakub said they are working well with the Judiciary.

He denied that some of the police officers deliberately put up weak cases against drug traffickers so that they are freed.

On a scale of one to 10, Elungata said the success of the war is between Elungata 6.5 and 7.