• Cohen claimed that his wife had denied him sex since 2014 and that she would beat him repeatedly and injure him. 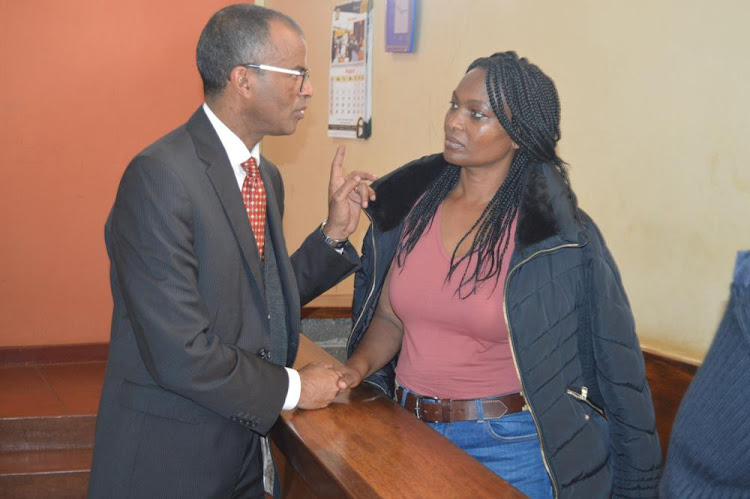 Sex, violence and property were at the heart the divorce between Dutchman Tob Cohen and his wife Sarah Wairimu, papers obtained by the Star show.

The court papers, exclusively obtained by the Star, paint a picture of marriage with sky-high hostilities, one that was irretrievably ruptured and had become conjugally nonexistent.

The Dutch businessman appeared to make every effort to push Wairimu out of their Lower Kabete home, the papers indicate.

Cohen went missing in July and the police found his body in an empty water tank in his home compound on September 13. It was a brutal murder.

Widow Wairimu, 52,  is being held at Lang'ata Women's Prison and is to plead to a murder charge on Tuesday.

It was the 71-year-old Cohen who first filed for the annulment of the union on January 21 under a certificate of urgency. He claimed that Wairimu had been denying him sex since 2014.

He said they were sleeping in separate bedrooms and he was preparing his own meals.

On February 25, Cohen amended the grounds for dissolution of the marriage to include cruelty and violence from Wairimu.

The Dutchman said that on one occasion Wairimu had stormed into his office, thrown water on him and warned, "Do not think that this is all; this is not over."

He also said that four days later, Wairimu assaulting him, causing "cut wounds and multiple bruises and as a result...[I] suffered pain and agony."

"[After pushing him off a flight of stairs]..while the applicant was lying on the ground, bleeding, the respondent came on top of him and started punching him and kicking him," the petition by lawyer Judy Thongori reads.

Cohen urged the court to order the OCS of Spring Valley police station to evict Wairimu from their home pending the determination of the case.

In 2015, as their marriage continued to deteriorate, Wairimu put a caveat on the land to stop its sale, a copy of which the Star has obtained. Documents show that Cohen attempted to remove the caution via an application dated July 1, 2019.

But in a rejoinder in a sworn counter-affidavit, Wairimu "admits that the marriage had irretrievably broken down but avers that the break down is on account of adultery and cruelty on the part of petitioner [Cohen]."

Asserting that she also wanted a divorce, Wairimu dismissed the claim that she was violent, arguing that this was a ploy by Cohen to paint her as a bullying spouse.

The particular attack started by Cohen was staged by him to build his divorce narrative, she said.

She also dismissed the claim of denial of conjugal rights, saying that they always shared the master bedroom except in sporadic occasions when she had been "forced to take refuge in our daughter [Renee] Gathoni's bedroom during times when the applicant is excessively intoxicated and abusive."

"It is only in December 2018 that the applicant started claiming that we have not been intimate for four years and I believe that the claim is intended to [be a] narrative that the marriage has broken down," she wrote.

Their 31-year-old daughter lives in the Netherlands with her husband, the papers read.

Wairimu further said that though they would engage in sex, Cohen was highly ineffective some times failed to perform as he was an abuser of drugs and had secretly undergone a procedure that sabotaged him.

"The applicant underwent a prostrate operation which seems to have affected his ability to engage often or effectively in the manner that he did before the operation," she claimed.

This situation made him increasingly "unreasonable, aggressive and rude and he would often come home in the early hours of the morning in an extremely intoxicated state," Wairimu said.

She did not give the dates of the procedure or where it was performed.

The medical procedure, she claimed, resulted in Cohen engaging in an extremely erratic lifestyle with "disruptive sleeping patterns which involved kicking me at night on the claims that I snore and waking up numerous times all through the night to smoke".

She also claimed that Cohen was a womaniser who would come home with makeup on his shirt.

Wairimu painted Cohen as a frustrated amorous old man out to evict her from their matrimonial home so he could entertain other women.

"The very intention of the petitioner is to ensure my removal from the matrimonial home so that he can have the home to himself to entertain other women of his choice as he pleases," she writes.

She said that on one occasion while she was away, Cohen had brought another woman to their home, including the bedroom. When she asked, he responded that the woman was his future wife from Machakos, the papers read

The papers also show that Cohen was particularly angered by the reportedly secret construction of a property in Nyeri in By Wairimu.

However, the widow told the court that she never had any construction in Nyeri and that it was Cohen who had a secret construction going on in Murang'a, together with advocate Chege Kirundi.

"...there has never been anything secret about the property in Nyeri. The applicant has all along known of my ownership of one-acre piece in Nyeri. Our daughter Gathoni expressed the desire to construct a house on the said plot and I asked the applicant if he was willing to partner with her on the project but he expressed no desire at all...citing that his funds were committed to an ongoing construction project in Murang'a county which he was doing in partnership with his friend and lawyer Mr Kirundi," she swore in the her affidavit.

Kirundi was the lawyer who presided over the opening of the Dutchman's will last week. He did not disclose its contents.

Staking claim to their home on Lower Kabete Road, Wairimu said they had been cohabiting as man and wife since 1998, bought the land and constructed the house together.

Hence, she said she owns it as much as Cohen did.

Cohen also willed a huge sum of money said to be in hundreds of millions to his brother.
News
3 years ago

Tense atmosphere and sharp barbs at the  Jewish Cemetery for the funeral of Tob Cohen.
News
3 years ago
Post a comment
WATCH: The latest videos from the Star
by GORDON OSEN News Journalist
News
30 September 2019 - 06:00
Read The E-Paper