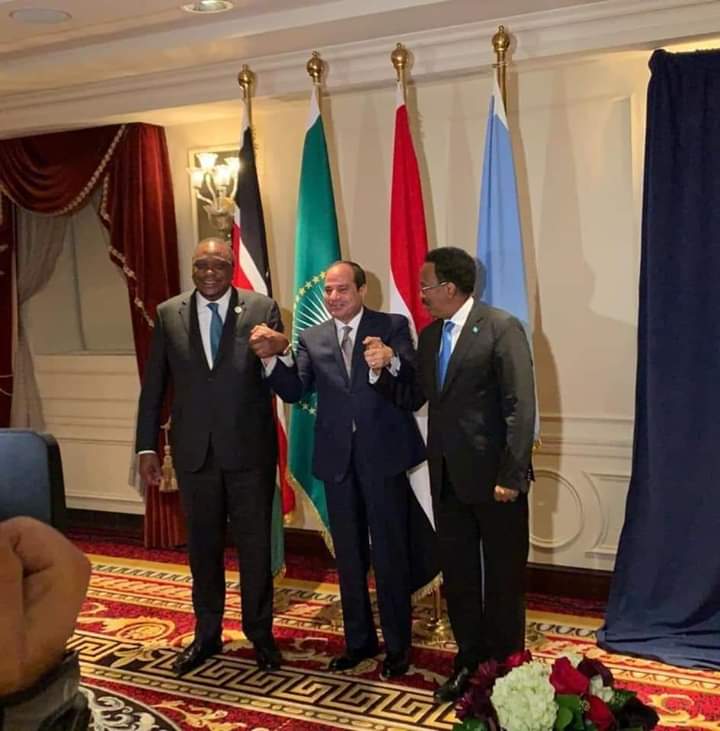 President Uhuru Kenyatta and Somalia's Mohamed Farmaajo said yesterday that they had agreed to normalise relations between the two Horn of Africa countries.

Kenya and Somalia have been at loggerheads over the maritime boundary in the Indian Ocean.

Yesterday, Egyptian President Abdel Fattah al-Sisi announced that he had brokered a deal between the two countries.

In their first face-to-face meeting since March, Presidents Kenyatta and Farmaajo gave signals that a deal could be in the offing with the formation of a “Kenyan-Somali Committee.”

The committee is to “work immediately on adopting measures for restoring confidence and resolving all problems so as to normalise bilateral relations” according to a statement posted on Egypt's State Information Service (SIS) website.

The meeting brokered by Sisi, the current African Union chairman, took place on the sidelines of the ongoing UN General Assembly in New York.

However, shortly after the meeting, Farmajo’s spokesman Abdinur Mohamed pointed out that the case Somalia has lodged at International Court of Justice will proceed to its logical end.

“Kenya and Somalia have agreed to work towards normalising relations without any implications for the maritime case at the ICJ which will take its full course,” the spokesman twitted.

He went on: "Strong neighbourly relations are important for the stability, economic development and people-to-people relations. Somalia welcomes the opportunity to work towards normalising relations with Kenya, as neighbours and partners, for a better common future."

Kenya’s Foreign Affairs Cabinet Secretary Monica Juma was more optimistic, saying the meeting was a step in the right direction.

“The trilateral meeting between Kenya, Somalia and Egypt was definitely a step in the right direction and we welcome it. Kenya has always believed in negotiations and African solutions for African problems,” Juma said.

Nairobi has been pushing for the case before the International Court of Justice to be resolved out of court.

Kenya has had misgivings with the legal process with some officials pointing out that the court’s president, Abdulqawi Ahmed Yusuf, is a Somali and therefore likely to be biased.

The hearing of The Hague case is scheduled to start on November 8.

Somalia sued Kenya at the ICJ in 2014, seeking to redraw the sea boundary said to be rich in hydrocarbons and fish resources.

However, most legal and foreign policy analysts have said legal processes often do not end conflicts and suggested Nairobi and Mogadishu should explore diplomacy.

They have warned that the decision of ICJ, which is binding on both sides, could offer little room for a win-win solution, hence may sow further political differences.

The row deepened after Mogadishu auctioned the oil blocks within the disputed area in London on February 7.

Kenya believes that  Mogadishu undermined the 2009 pact between them to resolve the dispute through dialogue. The pact was supposedly supported by the UN Commission on the Limits of the Continental Shelf.

In its argument, Kenya also believes the move is being driven by commercial interests of specific leaders in Somalia who have direct interests in oil blocs as well as foreign nations with vast interests in Somalia.

The turf wars have seen relations between the two neighbours deteriorate steadily with some Kenyan MPs suggesting that the military should be sent to the disputed area if diplomacy flops.

Just this month, Mogadishu banned flights from Kenya to Kismayu in what is seen as an attempt to frustrate Kenyan businesspeople in Somalia’s business hub.

Earlier, the Arab Parliament warned Kenya  to stop meddling with matters to do with Somalia and termed the disputed boundary “an integral part of the Arab waters.”

On its part, Kenyan ordered planes originating from Somalia to land in Wajir and not Nairobi.

It also banned unaccompanied luggage on planes from Somalia and blacklisted 66 Somalia top officials from entering the country.

Nairobi has also argued at the ICJ that any ruling favourable to Somalia would affect maritime boundaries across Africa, prompting countries downwards to renegotiate their own boundaries.

Stakeholders warn that if Somalia has its way, Kenya will lose up to 26 per cent of its exclusive economic zone estimated to be 51,105 square kilometres, 95,320 square kilometres of the continental shelf and access to international waters.

But during Tuesday’s meeting, it is understood that Uhuru and Farmajo agreed to restore normal diplomatic relations as they seek a long-lasting solution.

“The summit meeting, which came at the behest of both countries in the light of Egypt’s current chairmanship of the African Union, aimed at addressing a number of prickly issues between Somalia and Kenya to make sure that they would not affect the brotherly and good neighbourly relations between their peoples,” Radi is quoted by SIS to have said.

Radi went on: “For their part the Somali and Kenyan leaders thanked Sisi for answering their request to hold the trilateral summit, saying that this reflects Egypt’s sincere intentions towards serving the interests of their countries and peoples and boosting joint action to achieve regional peace, stability and development.”

Foreign Affairs CS Juma said the Kenya-Somali deal was a step in the right direction.

“The trilateral meeting between Kenya, Somalia and Egypt was definitely a step in the right direction and we welcome it. Kenya has always believed in negotiations and African solutions for African problems,” she said.