Kenya seeks an out of court settlement, Somalia insists case must proceed to full hearing.

• Egypt's President Al-Sisi convened the meeting amid efforts to seek an African solution to an African problem.

• The meeting comes as the Hague based ICJ court is set to enter full hearing of the case between November 4 and 8. 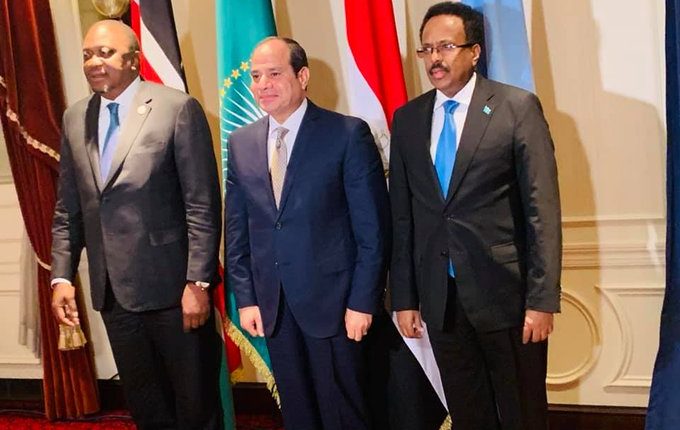 President Uhuru Kenyatta pause for a photo with his Somalia counterpart Mohamed Farmajo after a meeting with African Union Chairman and Egypt's President Ali-sisi
Image: COURTESY

Sources at the 74th United Nations General Assembly in New York said Uhuru met with Farmaajo to ease tensions between the two neighbours.

The source said the meeting was convened by Egyptian President Al-Sisi who is the current African Union chairman.

Al-Sisi is said to have called the meeting on the UNGA sidelines to compel the two nations to agree on a compromising ground over the disputed oil fields in the Indian Ocean.

This comes as the Hague based ICJ court is set to enter full hearing of the case between November 4 and 8.

While Kenya maintains it is seeking an out of court settlement over the matter, Jubaland has insisted it wants the case to proceed to a full hearing.

#Somalia and #Kenya have agreed to work towards normalizing relations without any implications for the maritime case at the ICJ which will take its full course after Egyptian President H.E Abdelfatah Al Sisi convened a tripartite meeting on the margins of #UNGA. pic.twitter.com/sVn2yZ32vM

The case was expected to start early this month but Kenya requested postponement after it disbanded its legal team.

Following the meeting with Al-Sisi, it is not yet clear whether the two countries reached an agreement.

The source said from the mood of the meeting, the two countries have mutually agreed to restore normal diplomatic relations as they seek a long-lasting solution.

This, the source said, will likely see the two sides reach an agreement that will see them avoid the court case.

Kenya says still pushing for an out of court settlement over the matter.
News
2 years ago

The decision was reached after considering Kenyan's application asking for postponement.
News
2 years ago