Official says the material used was not suitable for construction.

• Seven pupils from Precious Talent Academy perished while 57 others were injured in the Monday morning incident.

• Moses Nyakiongora said the fatal incident is a criminal offence. 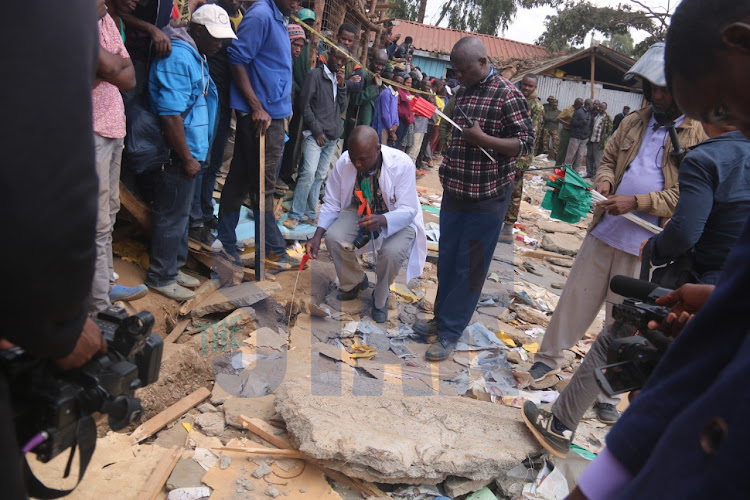 The Secretary of the National Building Inspectorate has termed the construction of a wall that collapsed in a school in Dagoretti as a deathtrap.

Seven pupils from Precious Talent Academy perished while 57 others were injured in the Monday morning incident.

Moses Nyakiongora said the fatal incident is a criminal offence.

"The person who did this is a criminal. It is a criminal offence," Nyakiongora said at the site of the tragedy

He added that the material used was not suitable for construction.

"We have school inspectors who must have checked the school before being licensed. There are many wrong things surrounding this school," he said.

He said the government needs to carry out its investigations to establish how it was handed an operation license with such makeshift structures, which he termed as death traps.

Nyakiongora said the Inspectorate has earmarked 750 buildings for demolition in Nairobi due to poor construction.

He said the Inspectorate is carrying out its inspection on illegal or poor constructed infrastructures in the country.

" Huruma is our web centre. It is our biggest problem in Nairobi,"

Government Spokesman Cyrus Oguna said that the government will cater for the medical expenses of the injured pupils.

Area MP John Kiarie said the school hosts about 800 pupils since there is no public primary school in the entire Ngando ward due to lack of land.

Kiarie said it is high time that the Ministry of Education steps in and allocated them land for the construction of schools.

Several pupils have been trapped in the classroom after it collapsed on Monday morning.
News
3 years ago

Those injured were rushed to Kenyatta National Hospital.
News
3 years ago
Post a comment
WATCH: The latest videos from the Star
by KEVIN CHERUIYOT Online Journalist
News
23 September 2019 - 13:01
Read The E-Paper