'I want an assurance from the committee to support this initiative' 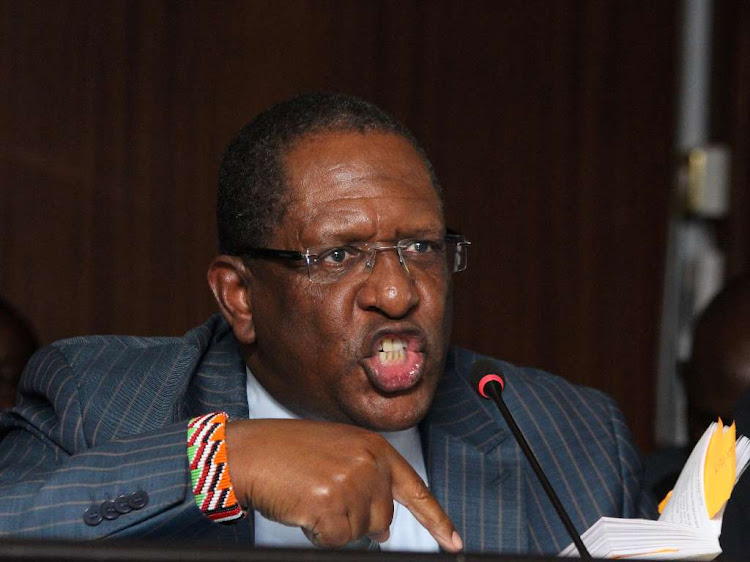 The government has sent clear signals that it will go after those who have encroached on Kenya's water towers.

Environment CS Keriako Tobiko on Tuesday explained that the next evictions from the country's largest water tower will be the big fish.

"There will be no sacred cow," he promised the National Assembly's Committee on Environment.

He was responding to Committee chair Kareke Mbiuki reservations that "we have some difficulties as to why you are targeting common mwananchi yet it is clear that the who is who owns land in forests. They should be the first casualties."

Mbiuki promised the CS the goodwill of Kenyans if he targeted the "big fish".

The MPs had invited Tobiko to shed light on the ongoing phase II Mau evictions.

"I will give notice {to all other settlers} but I want an assurance from the committee to support this initiative," he said. He needs resources and manpower.

Former President Daniel Moi is among the prominent people cited by the committee as owning huge chunks of land in the  Mau forest.

During the hearing, the emotive issue of whether title deeds held by those flushed out of Mau were valid came up.

Tobiko was asked to explain validity of titles.

Kosgei, the Kipkelion West MP, said, "The validity of titles has to be proved by a court of law. You are not the court of law."

He accused the CS of belittling the work of Parliament and asked him not to play with people's lives.

Were said it is wrong for the government to evict its people. "A government which displaces its people has no reason to exist," he said.

Kareke calmed the highly emotive situation. "We will seek an opinion of the Attorney General and the Land CS on the validity of title deeds."

The first evictions happened in July and August 2018 and affected 2,400 settlers in Nkoben and Kass Fm areas.

A profile of families done in 2010 found out that 716 people had title deeds, while 4,439 had allotment letters and sale agreements.

Some 2,741 had no documents to support their claims to forest land.

Tobiko said the Maasai Mau was the most critical ecosystem "yet it is now on death bed following massive destruction."

The CS said Kenya in 2015 signed an MoU with Tanzania to protect the Mara River basin which sustains 1.5 million people.

"As we speak, we will celebrate Mara Day on September 15 in Tanzania and we will be hard-pressed to explain why and how quality and quantity of water has diminished," he said.

The CS said Maasai Mau is under national government following the promulgation of Constitution in 2010.

Tobiko said the ballooning of the five ranches to a total of 42,007.85 acres (17,000 hectares) could not have happened without the involvement of government officials.

"The files of those individuals are with DPP. Action will be taken against them soon," Tobiko disclosed.

The original ranch owners will also be dealt with firmly.

Tobiko urged those with ownership documents to show up, saying they will also help in the probe.

He said no compensation will be paid to those holding title deeds.

Not even the innocent purchasers of value for money will be compensated as they bought land knowing that it was not available for sale.

On how Maasai Mau will be restored, the CS said 20 million trees will be planted with the help of the International Tree Foundation.

At least 1000 households are set to be affected in the second phase of evictions.

Other companies and business names in the five group ranches that extended beyond their adjudicated boundaries are Kaetoni Enterprises (director Mary Tamooh) and Kesumin Investment ( director Joseph Rotich). Sanyana Enterprises — whose directors are Nathaniel Getonge (four shares) and Pacifica Nyambongo (one share) — also extended into the forest.

Izmir Enterprises, whose directors are Sahir Mughal and Asiya Mughal, also encroached on the forest.

The directors and their shares of the seven are not known.

Mau encroachers must be evicted - Tobiko

8,860 people were evicted in the first phase.
News
2 years ago

None of those evicted would be compensated as they had illegally encroached on government land.
News
2 years ago

Murkomen: Only Uhuru can call for Mau evictions

He said Tobiko has no authority to call for eviction.
News
2 years ago
by GILBERT KOECH News Reporter
News
11 September 2019 - 06:45