• Mariga was among the 16 hopefuls who were interviewed yesterday by Jubilee National Elections Board (NEB) for the party ticket to participate in the November 7, mini poll. 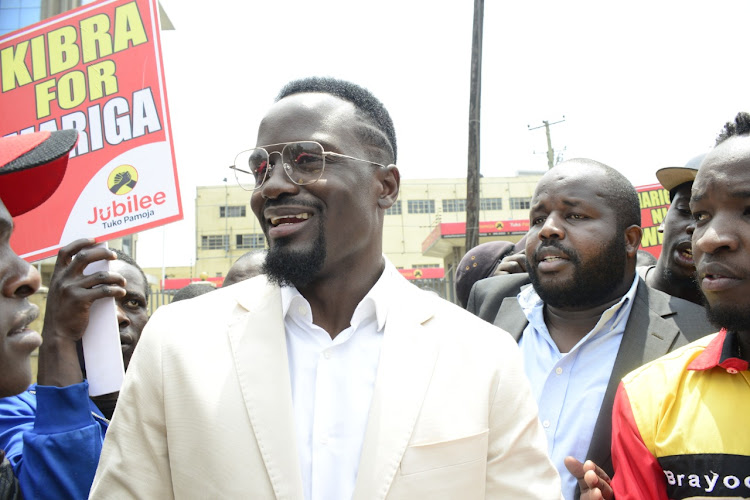 The announcement was made yesterday even as he dismissed claims of a ‘hidden hand’ in his move to contest. The poll is set for November 7.

The footballer said he made the decision to try his hand in politics after thorough soul-searching and consultation with his family.

“That's my decision and I'm not being pushed by anyone. There is no influence. I decided, together with the family, that I try it,” he said.

Mariga was among 16 hopefuls interviewed yesterday by Jubilee National Elections Board (NEB) for the party ticket.

The seat fell vacant following the death of Ken Okoth on July 26 at the Nairobi Hospital after a battle with colon cancer.

The NEB chaired by Andrew Musangi interviewed the aspirants in a daylong exercise at the party headquarters in Pangani, Nairobi.

“We expect all the 16 aspirants to come but we cannot say the winner now because interviews are still going on. We shall make announcements later,” Musangi had said earlier.

Mariga will face ANC’s Eliud Owalo, Ford Kenya’s Khamisi Butichi and an ODM candidate. The Orange party will hold its nomination on Saturday.

Mariga’s decision to seek the party ticket had divided the giant ruling party down the middle, with claims DP William Ruto was pushing for his candidacy.

The 11-member NEB was also said to have been split, with some favouring the footballer's candidature because of his support base in the constituency. Yesterday's session was attended by only six board members.

A rival group said to be headed by secretary-general Raphael Tuju is said to have been opposed to Mariga’s candidature and was keen to field a ‘weak’ candidate to give ODM an easy ride.

But Mariga said he has what it takes to represent the party.

"I have lived in Kibera, at Karanja, so I know everything about slums and Kibera. I just want to give back to the community. That is all," he said.

Signals that Mariga could be declared the party’s flagbearer were evident as he was the only hopeful who was accompanied by tens of supporters in branded red ‘Mariga For Kibra’ T-shirts.

They danced outside the Jubilee House, some carrying placards written ‘Mariga Tosha'.

During the interviews, the aspirants were asked about their level of understanding of the party's manifesto, constitution and whether they subscribe to the aspirations and ideologies of the party.

"I believe we are all equal and we all have equal chances. I submitted all the documents like any other and let's wait for results," Mariga said.

Meanwhile, the 11 aspirants cleared by ODM’s National Elections Board last week to participate in Saturday’s primaries have intensified campaigns. Most of them have been carrying out door-to-door campaigns.

Dagoretti High School principal Peter Orero camped in the slum at the weekend selling his agenda to the electorate.

He was in Lindi and Sarang’ombe wards on Saturday. On Sunday, he was the chief guest during a football match at Olympic Primary School.

“The MP who left us gave a lot of bursaries to students. I am one of the most experienced educationists around now. I will ensure all the students who had been given bursaries continue getting them. Apart from bursaries, we will look for sponsors who give scholarships to our children,” he told the Star.

Political parties planning to field candidates for the by-election have until Sunday to conclude their nominations. The Independent Electoral and Boundaries Commission will receive nomination certificates on Monday and Tuesday next week.