Officer, ADC manager and some staff had visited the land before attack 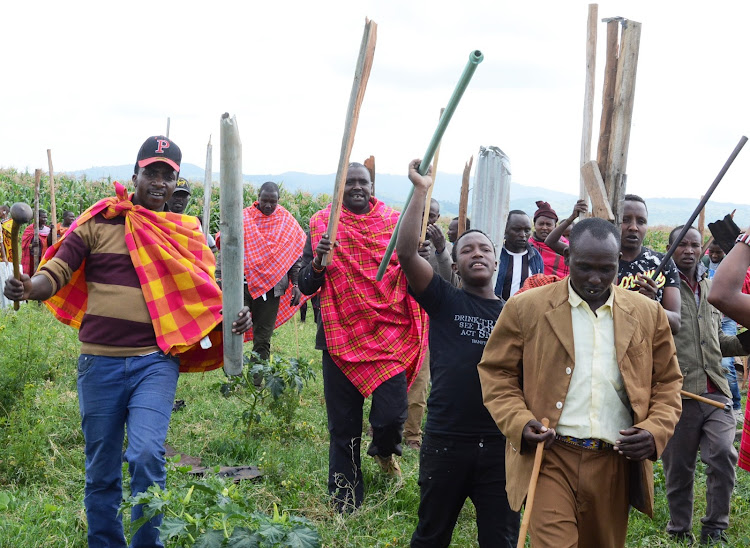 HUNT FOR 50 YOUTHS: Members of the Maasai community living in Ndabibi, Naivasha, demonstrate after hired youths raided their farms and demolished their houses
Image: GEORGE MURAGE

Tension rocked Gachuma on the Naivasha-Narok border on Wednesday evening after armed youths attacked a group of government officials and killed a police officer following a land row.

The officer, who is based in Narok, was hit on the stomach with a poisoned arrow. His body was found a kilometre from the scene of the attack.

Youths suspected to have been ferried to the place burnt a tractor belonging to Agricultural Development Corporation (ADC).

Following the incident, tens of armed police officers were dispatched to the area that has in the last two years recorded clashes leaving more than 10 people dead and scores injured.

At the centre of the dispute is 2,000 acres that were sold to pastoralists by ADC, which a splinter group has encroached on, claiming it belonged to their ancestors.

An ADC manager, his staff and the officer who was on duty were visiting the land when they were attacked by the more than 50 youths.

Naivasha subcounty commissioner Mbogo Mathioya confirmed the attack, saying that it was a matter of time before they caught up with the killers.

Mbogo noted that for years, the area had recorded bloody clashes over the ownership of the land sold by ADC.

MCA Gathariki Kamanu said one group had legal documents after buying the land from the government agency but another wanted to ride on historical injustice to lay claim.

“It's time the government stamped its authority and dealt with all those involved in inciting others,” he said.

The investigations followed a petition to Parliament by Magarini MP Michael Kingi
News
3 years ago
Post a comment
WATCH: The latest videos from the Star
by GEORGE MURAGE CORRESPONDENT
News
30 August 2019 - 00:00
Read The E-Paper